The Case of the Missing Populace (2) 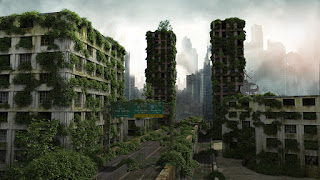 The professor's prediction held true: an open park swam into view once the disorientation of time travel dissipated. The cage's two passengers stepped out into a world of fantastical ruin.

Holmes scanned the browned and overgrown skyline. "It's New York, all right, judging by what's left of its early waterfront. Hallo-what have we here?" He paced about a rusted conveyance whose inflated wheels had gone flat. "Some sort of motorized carriage, I'll wager." Its doors and windows had frozen shut; nor did it bear any manufacturer's mark.

"Most curious," Watson opined. "No trace of people--not even a corpse. Yet I spotted a pack of dogs loping atop that collapsed warehouse."

"Quite." Holmes watched a flock of blackbirds headed north. "This was not the work of warfare. Note the absence of bomb craters or bullet holes. What's your impression, Watson?"

"Precisely as one would expect from lack of regular maintenance." Holmes bent to handle a fallen brick. "This one is sound enough. Not even a scrap of old mortar." Just then, some remnants of shattered glass smashed down from the heights. Both men sheltered behind the vehicle. Another dog pack trailed along the same route as the others, and another flight of birds winged their way behind jagged, windowless spires. "Come, Watson, let us see what clues await in these charnel houses."

As the loftier buildings looked in imminent threat of falling, Holmes picked his way toward a factory on the outskirts. Sunlight angled through gaps in the floors above, awink with falling water drops. A gigantic tree had burst through to spread its canopy far above. Suddenly, all was blackness.

"Eh?" Holmes brought out his torch, but save for a bewildered Watson, it illumined nothing. Yet the doorframe stood outlined by wan white light out in the street. All lay awash in a surreal stillness, nearly barren of color. While letters, written backward, appeared in a starless black sky.

Watson stared. "What could it mean?--'Three hundred years after people'."

Immediately the daytime returned. Now the buildings moldered in more advanced decay. With an ominous crack, a distant titan tilted, spilling stones and glass, and came down with a resounding crash. It spooked a storm of bats from empty windows.

"By the Rood, Holmes--we've jumped forward in time!" Watson looked for their fragile conveyance. "Blast! The cage is half buried in silt!"

"Quickly, Watson!" Holmes hurried to the site, where both of them scooped away mud and soot, until they could get the door open. "It's fortunate that the batteries are waterproofed. Let's be off before a flood or earthquake settles the matter." They climbed inside.

"We've not solved the mystery, Holmes. That writing in the sky; the fate of the people."

"I surmise, old fellow, there never were people here."

"Indeed? Then who built all this?"

"It was not built by physical hands. Consider the evidence." Holmes took up his pipe, his habit when matters were nearing resolution. "Birds and dogs that appear in regular cycles; sun shadows that never changed during the hour we were here; pristine bricks that fell from decayed buildings; the lack of trade signs; doors and windows never intended to open. I daresay we've tapped into some sort of mass media. We shall someday have viewers that conduct both sound and moving images."

"Preposterous!" Watson had a ready hand on the return lever.

"Those sky letters--they appeared for someone looking in from the outside. It's logical to assume these increments in time will be exponential; we dare not wait for the sea to claim this place, or a tree to carry our cage aloft in tangled pieces."

"Incredible, Holmes. While it's a relief that our future is safe, what shall we tell the professor?"

"That his time machine is very much in want of a few tweaks."


In the British office of the TV show "Life After People", a supervisor peered over the shoulder of his lead programmer, having been summoned with alacrity. A pair of Victorian chaps roamed the streets of a simulated New York.

"Somebody has an odd sense of humor," the programmer complained.

The supervisor rubbed his chin. "No time for it now. Edit that our before it goes to print."

"Hmpf." The programmer got to work. "Whoever did this has an amazing skill set. It's a matter for Scotland Yard."

Posted by Nick Nuko at 11:28 AM
Email ThisBlogThis!Share to TwitterShare to FacebookShare to Pinterest