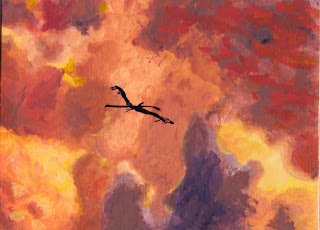 Wyverns are used by the Red Claw amazons for rescue, recon, and light attack. As they only carry three, a whole squadron may be needed in combat situations. They usually launch from larger battle dragons to extend their range, and are escorted out to waiting recovery ships or nearby islands. 8x10 acrylic.

Posted by Nick Nuko at 3:01 PM No comments:
Email ThisBlogThis!Share to TwitterShare to FacebookShare to Pinterest

Mick and Jane on the Moon — Two

The bottom of the well was lit by the sun. There was a streamlet that passed by on one side and solid ground bordering the stream. A pail hung down.

The girl had gotten up, and said tearfully, "Mr bother went down there, and he hasn't come back."

"How long ago?" asked Mick.

"An hour or two. The bucket's cracked, and we couldn't get anything. He went down by the rope. He stooped to get water; and then he turned around, and was gone."

"I can climb down, and see if he's there," said Mick. "If I'm gone for more than a minute, go to my sister there at the tree, and tell her what happened. She is Jane."

Mick was undecided what he should do; then he said he would climb down first. If he waved, for her to come down too. He grabbed the rope, and let himself down. He was careful to land on the ledge. Looking around, he could see that the ground was stone and nearly level. There were walls that seemed to open into other passages. There was lighting, too, some places brighter than others, as the sunlight seemed to enter through cracks in the walls. No one was there. He waved to the girl. It took her a little longer to get down.

Mick began calling him, and shortly the girl too. They stopped and listened. There was no reply.

"I don't know how we can get help now," said Mick, discouraged.

"It's a little scary down here. Maybe we should just go to the end of the wall where it opens in a different direction and call."

They cautiously walked to the corner of the wall, looking in all directions; and reached the corner in three or four minutes. What they saw around the corner was the same: walls irregularly lit by the sun. They called out Ted's name again, but there was no answer. The girl wanted to continue walking, but Mick warned her they don't know which direction Ted took; and they could get lost, and never get out.

"I could count — " the girl started; but quickly stopped. They could hear a faint rumble in the distance; and it kept getting louder.

"Let's get back to the well," said Mick urgently. If it's not your brother, we better escape."

They both ran toward the well. The rumble was very loud now.

(continued)
Posted by eolone at 4:10 PM No comments:
Email ThisBlogThis!Share to TwitterShare to FacebookShare to Pinterest

Invasion of the Brain Snatchers 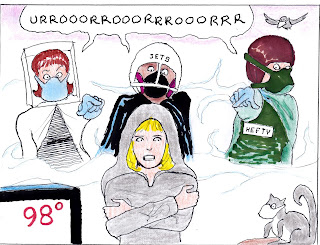 Posted by Nick Nuko at 9:27 AM No comments:
Email ThisBlogThis!Share to TwitterShare to FacebookShare to Pinterest
Newer Posts Older Posts Home
Subscribe to: Posts (Atom)