Since I haven't done much creative writing here, especially of late, I thought of writing criticism. Unless there is objection, such as it does not fit the literature expected here. Otherwise, short works would be best to analyze. I will work on the Mabinogion, early Welsh Medieval tales. I could write three or four times on each, summarizing and discussing. It would be more interesting if others read the texts too. They are no longer than short stories. I don't know what most of the stories are about; I'll find out as I read. The first of the tales is Pwyll Prince of Dyved. In a week's time.

Going back to my last writing here, I introduced Hercules as coming back after having a hell of a time. As a matter of fact, that is where he was, and that is what he was going through. Of course, the king lies to Hercules's wife to separate the two. Hercules avoids her question for fear she will want to see the dog he brought back, which could be the death of her. How the fish got into the play...well, that's fishy.

Posted by eolone at 12:02 PM No comments:
Email ThisBlogThis!Share to TwitterShare to FacebookShare to Pinterest

During a holiday break from the horror show, the dwarf Hecabano puzzled over a list of names for his next story. They sounded like what they were: uninspired. "Blast," he muttered. "Even Stephen King could come up with better monikers." Cross-legged on the carpet, he leaned back against the recliner, reaching for soda on the coffee table.

Ed came in and looked down at the list. "Names, eh? It's not that hard."

"That's because of the last name." Ed sat on the low table. "You wanna avoid place endings like -sen, '-ford, -ing, -man, -son, and so on. Also the trade names like Hunter and Carver."

Hecabano had pencil ready. "So thrill me, Master Ed."

"I'm intrigued. Do you know someone of that name?"

"Simple: Breck is an old west name so old it's fresh again. Stepplet is 'Stippler' with a few changes because it's a trade name."

"I see." The dwarf's shaggy brows raised. "What of scifi and fantasy?"

"For that, I take what we already have, shake it up, drop it on the table, and do some rearranging. Like so--" Ed took the pencil, and pulled over a new pad. "Take a cell like the basophil. Pronounced backwards, it's 'Lifozab'."

"Hrmm. My lead character is not a nose-bone head hunter."

"Well, how about 'wagon train' reversed. You've got 'Nairtnogow'."

Ed scratched out another. "Comely reverses to Eelmuk." He saw the objection himself. "Right--too Pacific Islander. Then let's try a pill you could benefit from: Zoloft reverses to Tfoloz."

"Eh, the T is awkward. Let us go with Foloz. It's a good name for a spacegoing freighter captain. Now I need his first officer, a lass from Earth."

"Why don't we hit up the past again: Bethany."

"Patsy, then, after our own Patsy in the Outworld."

"Quite satisfactory!" The dwarf wrote it down. "With Miss Patsy being an assassin and all. When she isn't doing her standup act at the club."

Ed stood and jangled car keys in his pocket. "I'm going out for a biscuit. You got it covered?"

"I shall run another past you, the name of the ship's purser: Oyeedayr."

Posted by Nick Nuko at 10:04 AM No comments:
Email ThisBlogThis!Share to TwitterShare to FacebookShare to Pinterest 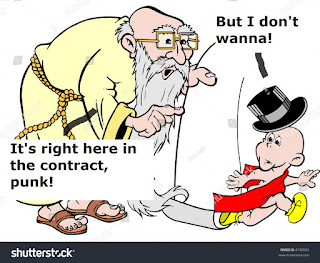 We'll make the most of it, come what may. Don't party too hard tonight!

Posted by Nick Nuko at 5:49 AM No comments:
Email ThisBlogThis!Share to TwitterShare to FacebookShare to Pinterest 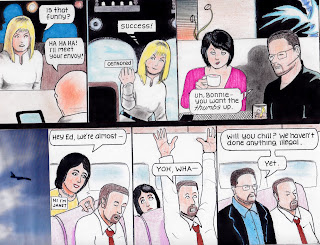 For some scenes in a story, there's nothing quite like the visual treatment. In this foundational story of Team Dan, the crew jets toward England, having arranged for unauthorized access to the Glastonbury ruins. Everyone is on edge, especially Ed. Likewise, visual elements can easily be translated into stories. One example is fanfiction based on graphic novels. It helps to have multiple sources of inspiration, which even extends to video games. The ultimate benefit is to keep you writing, and you get better with practice.

Posted by Nick Nuko at 7:36 AM No comments:
Email ThisBlogThis!Share to TwitterShare to FacebookShare to Pinterest
Newer Posts Older Posts Home
Subscribe to: Posts (Atom)