Ok I have read Karen Marie Moning's works a bit.  She's a new writer to the Celtic fantasy genre and it's always interesting to me to see how an author plans out her books.  She certainly has a detailed account to one of her male characters.

Going to let you see her technique which was hands down, what a well done character.  Although the book is romance, of which I rarely looked into but some do interest me with the plot and the best way an author expresses their craft in writing. It's a long post but worth the read.

Let today be the day. Snow is falling outside our North GA home and keeping warm in the kitchen, got the Hobbit & Lord of the Rings soundtrack going to keep the creativity going.  Got some hot tea
A couple of clips to enjoy.
What is your favorite thing to write or paint to?

Posted by Laura J at 4:22 PM No comments:
Email ThisBlogThis!Share to TwitterShare to FacebookShare to Pinterest

The Phantasm at Orly 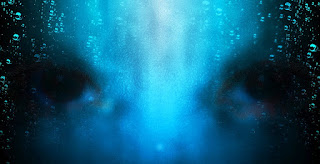 France, during the Hundred Years War

Captain Rodrigo led a small force of mounted knights and pikemen through a forest vale, uneasy at how fast the mist had settled in. Since the English had the upper hand at the moment, his men were available for a side mission to a hamlet called Orly. The Frenchies were drawing courage from a local saint, one whose bones must be taken to England for bargaining.

Even the horses sensed something unnatural in the gathering fog. It overhung the trees, where a watery sun kept pace through a yellow miasma. Rodrigo took solace from the rattle and clink of armor and spears. The clumping hooves of the horses could trample anything that got in the way. Anything of a physical nature, anyhow.

Sergeant Weare, the foot leader, dashed toward Rodrigo, who signaled a halt. "Captain, the pass is blocked by a giant bed."

Some of the knights chuckled.

"You're fog-addled, Sergeant. Return to the point." As they neared the decrepit monastery, clinging mist began to saturate everything. Torches sputtered to life. Presently they came to the phenomenon.

Sir Davies raised his visor. "Look there--it is a bed, with an old lady upon it!"

"The peasants had a drawing made," said the sergeant. "On her death bed. She lay covered to the chin, wearing a shawl. Tis the selfsame image!"

"A drawing come to life?" Rodrigo sneered. "Show them how little regard we have for their witchcraft."

The sergeant reluctantly trotted through and back again. He clasped arms as if frozen. "Tis the very cold of the grave in there. The horses will surely shy from it!"

"Then we'll defeat their strategy. Dismount!"

Pikemen fell back to tend the horses as the knights clattered forward.

The old lady sat up in the phantom bed with a piercing howl, mouth stretched into an inhuman maw. Horses went mad with fear, barely restrained by the struggling pikers.

Rodrigo  couldn't afford to be stranded here without the animals, but he had a mission. "Flank the thing! I want those bones!" Knights remounted their skittish chargers while pikemen pressed forth through trees and low shrub.

The sergeant's experience was typical. A wispy figure arose as if hinged at the ankles. Crazily, that was more fearsome than the specter itself, a lost soul damned by some bizarre torture. It lurched at him with the same unearthly wail and distended jaws. The sergeant backed away, tripped, splashed down in a rivulet. All around, men jabbed at nothing; ghostly hands reached to curse them with numbing cold.

"I yield!" the sergeant shouted at his tormentor.

The phantom pitched forward, face down, and melted into sodden leaf cover. Pikemen staggered back to the road, some supporting stricken comrades.

Rodrigo glared at the giant bed, whose occupant reposed once more. "The field is yours, foul spirit!" He signaled withdrawal. "I foresee we shall someday have this land. But not all of it. . . ."

Posted by Nick Nuko at 9:47 AM No comments:
Email ThisBlogThis!Share to TwitterShare to FacebookShare to Pinterest

What Is An Interesting Character? 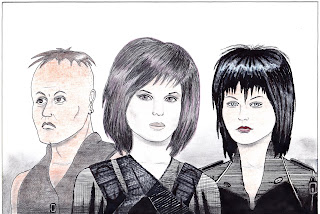 If there's a story equation, it looks something like this: Person plus Desire minus Obstacle = story. Desire is the easy part, as we all yearn for something or other. It's defined by your story world, what it dangles to pull your protagonist along, be it revenge, romance, adventure, materialism, belonging, and so on. Regardless of genre, there's a pitfall equation: Dull Person = Who Cares? Fortunately, the menu for assembling a compelling character is as big as the Dallas phone book.

Why do we care?

Gamers know the fun of assigning traits to a character and then piloting him through the game world. Reading is similar. We watch the person grow, tsk at his mistakes, emphasize with his joy and misery, judge his oppressors. It's a vicarious way to satisfy the need for adventure, and a good yarn will even teach you a few things, depending on the author's area of expertise.

Where do we get ideas?

Life experience is a good way to make a character authoritative on some subject you've studied or practiced. Books, movies, TV, and games have a way of resonating through scenes that reach you at a personal level. People you know are a great resource, but should be confined to speech and personality; their mark on the story is up to you, and they'll be called on to react in ways they probably wouldn't in real life. Fictional characters are often built around a single trait. Seinfeld gave us the eccentric Kramer, shallow Jerry, and insecure George.

Maximize the impact by tailoring these to create the biggest driving force. In fantasy, a low-born person who yearns for forbidden knowledge might be unexpectedly virtuous. Can he or she handle it without being corrupted? Naturally, the elites will oppose it, and you can even through in some Inquisition types to up the danger level. Let's not forget villains. They'll seek to exploit fears and insecurities, pit their strengths against those of the protagonist. He'll either grow or suffer a setback. There's also the matter of too much of a good thing, like generosity and curiosity, recipes for exploitation.

Is there a magic formula?

Not really. The more universal the appeal, the more people can identify with your hero. Most writers have a personal vision for the protagonist to fulfill. It often leads them to a niche market, which can be more satisfying than taking a shotgun blast at the market with a clone of Superman or Harry Potter. Genre is a good place to start. In a squalid city of thieves, your guy must be stealthy, streetwise, a fighter, and able to rationalize breaking the law. He's also a stickler for the clan code of honor; it's a good idea to create a situation that requires him to go against it.

That's the basic idea, and a good way to hone skills is by doing fan fiction. Established characters leave you free to practice prose, description, and dialog. It works, being tested by experience.

Posted by Nick Nuko at 12:41 PM No comments:
Email ThisBlogThis!Share to TwitterShare to FacebookShare to Pinterest 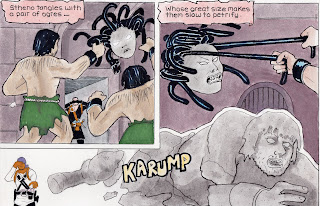 Previous  having recovered her mace with help from fairies, Stheno faces a battle with ogres.

Though the fairies pressed their attack, they lacked the firepower for dealing with ogres. The giants were too dumb to appreciate the subtleties of fairy music; they swatted away explosive stars; and Chianna couldn't use a starburst spell to blind them, since that would spoil the gorgon stare.

"Enough of this oafish delay." Stheno unclipped her mace. "I summon. . . .me!" She transformed into a giant floating head. But the ogres were slow to petrify owing to their small intellects. When all four finally succumbed, Stheno transformed back, dropping from the tax on her reserves.

"Presumptuous cretins!" She sat among wildflowers, surrounded by stone gargoyles. From across a bridge came two men, one of them having dark skin. "A Numidian."

Pete bristled. "Why does everybody say that? I'm from Cleveland."

"No you aren't," Ed said. "You're just tired of being the emissary from Planet Soul."

The other members of Team Dan arrived. Dan counted on the hovering fairies to assure the gorgon they weren't enemies. "We're glad you're all right, Miss. You probably know about your two sisters and the maces they're bonded to."

"I do, Leader Man." Stheno fixed her eyes on a trio of approaching dragons, and her serpents began to rise.

"Wait!" Zena came from behind and placed hands over Stheno's eyes. "Those are our dragons. They're here to recover us from the mission." 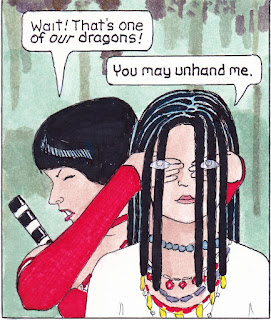 The serpents relaxed. "You may unhand me, Sword Girl."

Bonnie put a nervous hand to her neck. "Those eyes are looking right through Zena's hands!"

The gorgon returned the mace to her sash. "I have seen how capable you are. There is the matter of a jealous goddess, and what she has done to me and my sisters."

"A goddess?" Ed shook his head. "That's a tall order, and we don't come cheap. You got an account with us?"

"Hold on,"Dan advised, seeing how the girl wasn't amused. "Consider working with us until you catch up with this goddess. It'll be profitable for us all."

"As you say, Leader Man. My first task is to free my sisters."

Unnoticed, Bonnie carefully draped a dress fold over the Mace of Medusa.

Posted by Nick Nuko at 9:38 AM No comments:
Email ThisBlogThis!Share to TwitterShare to FacebookShare to Pinterest

Good afternoon fellow writers and artists,  hope it's been a great weekend so far.  Got my personal workspace up, and as I thought of a bonsai tree which would be nice to keep up over the years that would be ideal.

We are moving in a few weeks so it will be an idea for the new house.  I found a mini rose for some inspiration next to my outline.   Bought some new U2 music to churn out songs. It's that kind of day today as it's cold, rainy and overcast.   Still getting over a sinus issue.  Hard to work when not feeling chipper.

What are you working on today? Or is it a day of rest for you?  Working on a couple scenes.  Somedays I'd like to work faster but this is all I can do at this pace.

Working on a painting? Graphic design?  Have a question? Ask and it will be answered by someone in the field with their expertise.  Have new ideas for the blog?  Let us know about it so it can grow. Have a great Sunday.