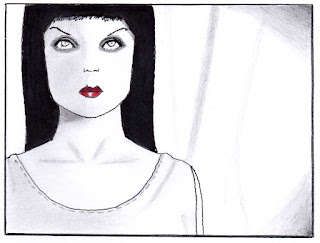 "Sheldon Cooper here, along with my talented assistant, Amy Farah Fowler. Tonight--and I'll get to that in a minute--we're going to examine caveats about naming your kids."

"Here's an example," Amy said. "If your last name is Moore, don't name your daughter Mona."

"Did you catch that?" Sheldon grinned. "It's quite a romanticized--"

"Yes, Sheldon, I think they can figure that out. Why don't we introduce our guest, who has an unusual name."

"Right, and she's the reason we're here at night, because she's a vampire." Sheldon rocked with glee, getting into the game. "She has a curious aversion to cameras, and prefers to sit over by the window. I must say, the way those curtains rustle in the moonlight creates quite a ghostly effect."

Amy took note of Sheldon's increasing infatuation. "Be careful, Sheldon. This woman is some kind of succubus."

"Really, Amy, that's a curious statement from one who holds a doctorate in biology."

"Biology is exactly what I'm worried about."

"Nonsense. Let's bring her into our discussion.She's known only as Cambris. Tell us something about the etymology."

"The last two letters," said the mystery woman, "are a legacy of Norse settlers who migrated to the Caucasus. It is not my legacy, as I am from Magyar and Slavic stock."

"May I say," Sheldon began, "it all came together in a most pleasing way."

Amy discreetly smacked his thigh. "Miss Cambris, I noticed how you applied lipstick without using a mirror."

"Now how could she use a mirror?" Sheldon grinned hugely.

Did nothing strike this woman as funny? "I am adept at applying cosmetic, which of needs is consumed by use of spell craft."

"Amazing!" Sheldon actually clapped. "She's brought a new angle to the genre! I'd also expound on what Amy said, seeing how your eyes are drained of color. Contact lenses, of course, but how do you explain that in your paradigm?"

"As I indicated," she said, "pigment is leached by magic. Their amber iridescence shall be restored when next I feed."

Sheldon slapped a knee in delight. "She has it all covered! I wouldn't be surprised if you can tell us the town where you became a creature of the night."

"The town of Split on the Adriatic, where I was wife to the village alderman."

The topic of names was now the topic of Cambris. Feeling the first tingle of dread, Amy brought out a small mirror where Sheldon wouldn't see it.

But Cambris did. Her upper lip curled to expose the roots of fangs.

"Amy?" Concerned, Sheldon gave her a little shake. "It's your turn to ask her a question."

"Oh. . . .okay. I'll ask her in person." Amy had been working in her purse, joining two pens with tape. She approached Cambris out of camera view and sprang her makeshift crucifix, which had positively no effect.

"It is powered by faith," Cambris said, rising. "Yours seems to be deficient." Soulless eyes locked hypnotically with Amy's.

"Really now, Amy!" Sheldon's intervention broke the spell. "We mustn't prevail on her to perform that old shtick." He came to offer a hand. "It's been a pleasure, Miss Cambris. Say--you're really cold. I'm--"

Amy drew him away in mid-sentence.

"Amy, that was rude! Wait--where'd she go?" Curtains wafted at the open window. "What a trouper, making a realistic exit that way! I just hope she doesn't fall from way up here."

"Somehow," Amy said, swallowing her fear, "I doubt that will happen."

Posted by Nick Nuko at 4:35 PM No comments:
Email ThisBlogThis!Share to TwitterShare to FacebookShare to Pinterest 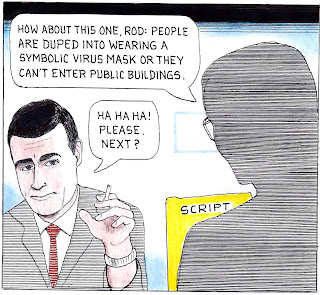 One simple way to get half tones is the old fashioned horizontal line. It's tedious, though, especially when modern copiers are light years ahead of the old Xerox machines.
Posted by Nick Nuko at 7:40 AM No comments:
Email ThisBlogThis!Share to TwitterShare to FacebookShare to Pinterest 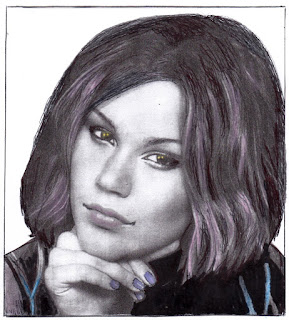 On this summer night, the Wicca Horror Show did its live segments at Ocean World. The three mermaids from Six Forks flew in for a special appearance, performing close to the viewing glass in a private space to thwart photo bombs from dolphins and orcas.

From their press box, Wicca and producer Ed had a good view of the mermaids. In addition to the cameraman, they were joined by a furtive, hooded figure. The main problem for a vampire like Cambris was all the phone cameras she failed to register in. Thus, she was here incognito, and Ed had  good reason for keeping her close.

The movie back at the studio paused for a commercial.

"Now a word from Woofy Pill," Wicca announced. "It's only for men--something about enhancement, whatever that is. Side effects include panting, fleas, and toilet drinking." She gave Ed a snide look. "And you say we're complicated." The nearby sponsor clapped hand to face in disbelief.

Wicca took time to sign her latest poster for a few fans who had actually seen the show. This one was more cheese-cakey than the norm, but managed to look sinister all the same. Signed ones had "Wix" slashed across one corner in lurid violet. "Now then--let's see what the fish women are up to. The blonde in white is Binia; the black hair in blue is Sirtis; and the redhead in green is Ellie."

Ed watched how they were able to stay under for so long. Each had a conch shell she would bring to her face every couple of minutes. Most likely they were suction-activated compressed air devices, with digital counters to show remaining breaths.

Binia "poured" from a pitcher for Ellie, who pretended to drink, then followed up with an undulating napkin. Sirtis read a newspaper, no mean feat underwater. After a short stint of submerged Frisbee, they surfaced to applause at a miniature pirate ship. This would ferry them to a private dock for getting into a truck.

"By infernal night," Cambris intoned. "What wastage of noblesse is this?" Fortunately unnoticed, she became a mist and flowed toward the gigantic pool.

"Krikey." Ed prepared to race her to the scene."I expected her to be a little spacey after three days without a nip. Quick--find us a suitable target."

"She thinks they're real?" Wicca grinned. "Why not. We have mermaids in the Outworld. You know, Vern?"

Ed used his credentials to access the private dock just as Cambris materialized on the stern. The girls had met Wicca before, and knew about the supernatural. But this was something else.

"It's cool," Ed assured them as he threw a mooring line. "That's Cambris. I was showing her a story some guy wrote about a vampire mermaid."

Cambris glided closer, and the mermaids looked ready to dive overboard. "Not since doomed Atlantis, birthplace of you, my sisters of the sea, was there such exploitation. Who has done this to you?"

Leaning near Binia, Sirtis said, "She thinks we're real. Should we tell her?"

"Allow me to answer that." Ed motioned Cambris back toward the press box. "She's looking for a meal." He looked sheepish. "We have rules, and everything. Only bad guys." He hoped Wicca had scrounged up a suitable mark in her crystal skull. Keeping a nervous track of the vampire, he returned to the press box.

"How about this," Wicca began, displaying an image in the talisman. "Here's a guy handing out anarchist flyers. I don't know what you're looking for, but that doesn't sound very nice to me."

"Boogity," Ed said. "Miss Cambris, you don't have to limit yourself to a nip. Go ahead and break the bank." Cambris' eyes shrank to predatory pinpoints as she awaited a clarification.

"Writers." Wicca rolled eyes. "He means it's time to cull the herd."

Cambris became a mist again, and flowed unseen toward her target, who conveniently lurked in the shadows.

Posted by Nick Nuko at 6:21 AM No comments:
Email ThisBlogThis!Share to TwitterShare to FacebookShare to Pinterest 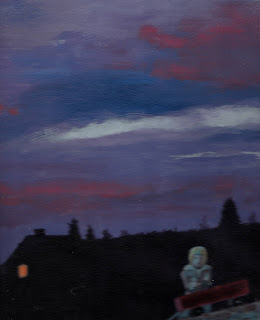 When it's wet out, you can have a colorful sky even when only a minute of light remains. So finds the child playing in a wagon of cold rain water. She'd better get home before someone turns that light out, though--it's the only landmark. Acrylic, 16x20.
Posted by Nick Nuko at 3:07 PM No comments:
Email ThisBlogThis!Share to TwitterShare to FacebookShare to Pinterest
Newer Posts Older Posts Home
Subscribe to: Posts (Atom)