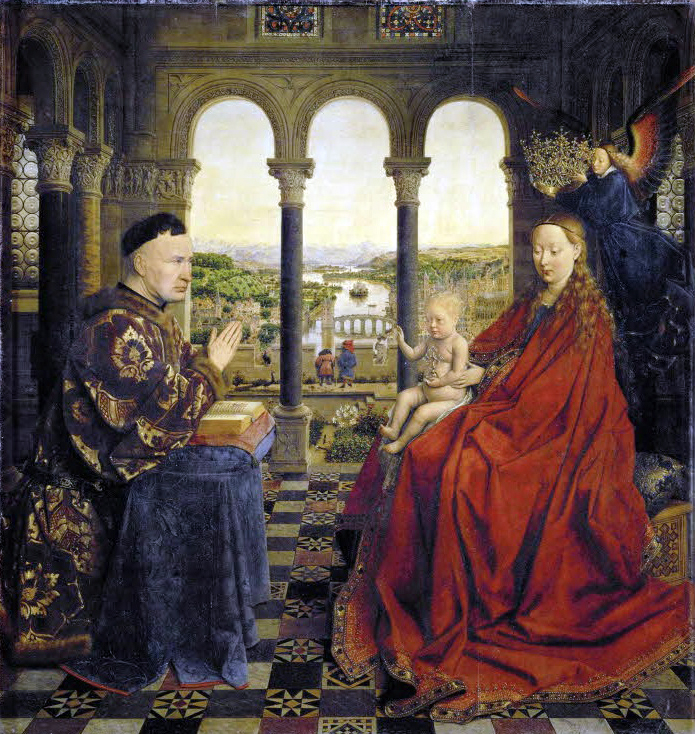 
Jan van Eyck's The Madonna of Chancellor Rolin portrays the donor Rolin kneeling in adoration of the Christ child. In the middle of the canvas two miniature figures draw the eye to a bucolic exterior. The interior is rich in color, but this tends to conceal the coldness within. In the spiritual world, as in the political, the chancellor dominates.

Van Eyck could not easily refuse Rolin; but he did depict the chancellor unkindly. In Van Eyck's painting The Madonna of Canon van der Paele, the donor, der Paele is accompanied by saints who act as guides. There is no sense that he breaks the boundary that should separate him from the Virgin and Child, who look at him. With Rolin, there is no interceding saint; and he is on a level equal to Virgin and Child. He stares forbiddingly at them while the Virgin recoils from his gaze. Van Eyck did not end with this. The background of the Virgin includes magnificent churches. Behind Rolin, however, there is a commonplace town. The changes to the painting likely came about under Rolin's direction. His huge money bag is painted over; and now the Child blesses him.

In the background, just below Rolin's folded hands, are peacocks. These symbols of eternal life are likely meant here to signify ostentation. If the two tiny figures are the artist and his (deceased) brother, as others have suggested, then the artists turn their back on Rolin. Between the artists and the interior two rooks walk the grounds of a flower garden. Do the artists leave their mocking selves behind? 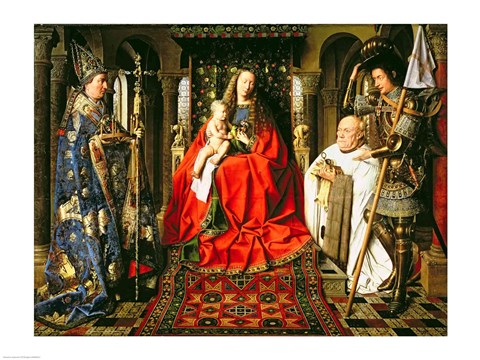 Posted by eolone at 9:10 PM
Email ThisBlogThis!Share to TwitterShare to FacebookShare to Pinterest