What style is this?

What kind of style is this?

Posted by Laura J at 5:51 PM No comments:
Email ThisBlogThis!Share to TwitterShare to FacebookShare to Pinterest


Posted by Laura J at 10:21 AM No comments:
Email ThisBlogThis!Share to TwitterShare to FacebookShare to Pinterest

Nature Trail In The Rain

This is a sort of dreamy rendition of a photo I took on a local jogging trail. It winds 3 miles around a golf course. Since everything is a little blurred by the wetness, I captured that with rapid strokes and wet-on-wet blends. During a downpour, I sheltered in a gazebo until deciding it wasn't going to stop. So I took off running toward the parking lot and got good and soaked. No sooner did I arrive than it was suddenly blue skies. Moral: good things come to those who wait. 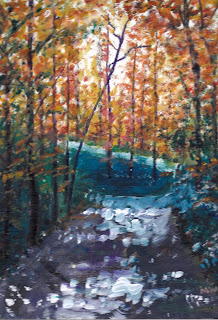 Posted by Nick Nuko at 4:04 PM No comments:
Email ThisBlogThis!Share to TwitterShare to FacebookShare to Pinterest

The Eyes Have It

Ed rose early, taking advantage of this weekend  break from the show's filming schedule. The three-bedroom condo hosted two others: the dwarf Hecabano and the show's diva, Wicca. It was bedroom shoes only on the plush white carpet, a rule even the mercurial hostess followed, though her choice of TV viewing was a little odd.

"A soap," Ed said. "The queen of the Goths is watching a soap. Are you channeling June Cleaver again?"

She didn't turn around from her cross-legged position on the floor. "That was a foray to Nerdsville just to see what it's like being you two."

Hecabano clipped some fast-food coupons. "We fail to see the connection with soaps, Heiress of Hammered."

"It's the eyes. When you get close, you can only look into one at a time. These women look from one to the other like there's going to be a difference."

"Perhaps," the dwarf opined, "they attempt to chase the truth round and round."

Ed eased into a recliner. "Reminds me of a psych class in college. The professor had us pair off--naturally I got a guy--and lock gazes. He finally had to tell us what the heck we were looking for. If you focus on a single point long enough, the eye shifts involuntarily because that spot on the macula gets fatigued. We never saw it, since nobody wanted to hypnotize each other."

"Yes," Hecabano prompted, "but you mentioned this later to a sociology teacher who decided to duplicate the experiment.."

"That she did. This time I got a girl with green eyes who stared me into the ground."

"In any case," Ed countered, "I'm not Hispanic, nor am I on that side of the gender fence."

Wicca leaned toward the dwarf. "This bloke is touchy, isn't he."

"Whatever that is," Wicca said. "I'm sampling all I can of this world before you clowns blow it away."

Hecabano sorted his coupons. "We have not yet solved the question of which eye to use."

"I have it!" Wicca jumped up and went nose to nose with Ed. "Look through the other person, so your eyes move apart and line up with their opposites--except for being blurred."

"Or this," Hecabano offered. "Look between them at the bridge of the nose."

Ed eased Wicca off to arm's length. "I suggested that to Miss Green Eyes, but the sociology teacher heard me and said, 'Nope! You have to look at the eyes!' "

"Which one?" Wicca asked.

Ed sighed. "I think this is where we came in." 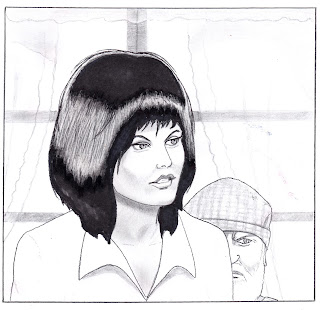 Posted by Nick Nuko at 11:42 AM No comments:
Email ThisBlogThis!Share to TwitterShare to FacebookShare to Pinterest
Newer Posts Older Posts Home
Subscribe to: Posts (Atom)