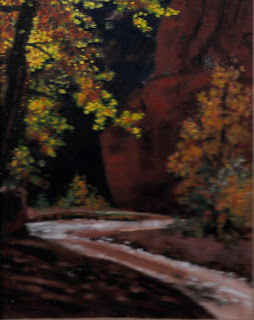 This is another one scanned through the glass, which blurs things a tad, making it look more like a photo. The full 16x20 has the tree dominating against a dark mountain. Next we'll take a look at the 'blue' version, which has a more autumn effect. What drew me to the scene was the dappling in the left foreground, done by the same sun angle that fires the leaves bright yellow. Acrylic as usual--that being a forgiving medium.

Posted by Nick Nuko at 1:56 PM No comments:
Email ThisBlogThis!Share to TwitterShare to FacebookShare to Pinterest

"Sheldon Cooper here with another Fun With License Plates, along with my capable assistant Amy Farah Fowler." Amy did a smiling nod. "Today we'll test my hypothesis that celebrity IQ is significantly lower than the norm. We've sent invites to all of them, so let's begin. Our first offering is thus, which is an indictment of society."

"And we have Mr Herman Munster on the line. Go ahead, sir." 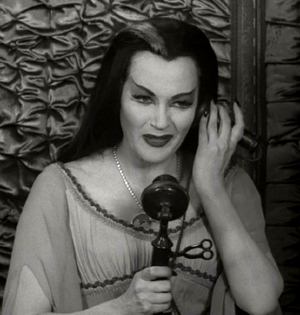 Sheldon traded looks with Amy. "Are you aware of any city called Wahap?"

"Well, no, but ND stands for North Dakota."

"Good grief. As per the rules, you may now challenge us with your own plate idea."

"But madam, that's hardly a challenge."

"Thank you. It's how I feel about my Poopsie!"

"Ai yai yai." Shaking his head, Sheldon pressed on. "Our next challenge means 'depraved or unprincipled'." 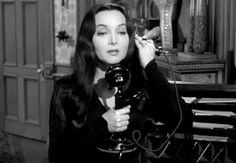 "Eureka!" Gomez Addams shouted. "It means 'in regards to problem number eight'. Any college man knows that. Now, my good man, my wife is going to stump you with this one!"

Seeing Sheldon's face twitch with the unthinkable tint of failure, Amy jumped in. "Given the five letter suffix, it kinda sounds like food."

"You've guessed it, dear girl! It's bone-a-roni, the Transylvania treat. My kids love it, and I'm sure yours do as well."

With a smirk at Sheldon's blanched face, Amy said, "Uh, not yet, but someday!"

Even before she finished,  Sheldon announced loudly, "If you ladies will kindly refrain from sharing secret recipes. . .Now the part of our show where a caller gets the ball rolling. Go ahead, caller."

"This is Wilhelm Klink of Stalag Thirteen. Are you ready for this?" YAODER9

"Ja oder nein? Yes or no? But you can't mix languages like that! It's untidy!"

"Actually," Amy said, "I thought it was clever how he did that." 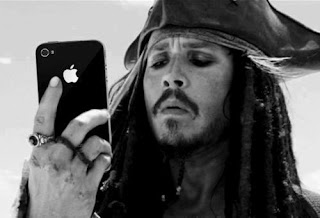 "You've got me all wrong, mate. We pirates are, in the main, a level-headed lot."

Sheldon traded another look with Amy, who shrugged. "May I inquire, sir, how you obtained access to a phone in the eighteenth century?"

Amy found it necessary to pick up the thread. "Very well, Captain. Here's your challenge."

"Crafty, dear lady. You though I'd say, in the confines of my era, 'Email the nun in cell eight'. As I have no idea what email is, it can only mean. . ." He supplied the correct definition.

"Now Amy." Sheldon pointed to a dictionary. "That isn't much of a challenge for a scoundrel who uses ten words where one will suffice."

"Not bad for a bloke what never heard of a license plate, ey?"

"Time for one more," Amy said. "Here's the clue: a humdinger, in four words."

"Maxwell Smart, secret agent, here. That happens to be my password: fourteen that jazz. You're all under arrest."


Posted by Nick Nuko at 9:44 AM No comments:
Email ThisBlogThis!Share to TwitterShare to FacebookShare to Pinterest
Newer Posts Older Posts Home
Subscribe to: Posts (Atom)