There's an amusing story behind this 10x14 acrylic. When I put it on the old Art Show on Disqus, it was titled Tractor Shed. A savvy user commented that, due to its isolation, it was more likely a fertilizer shed, as these had a propensity to explode. She then included a photo of an exploded shed. I commented 'My poor shed. . .'

The sky was completely dropped; scanner must be getting old, because it doesn't handle pink well. 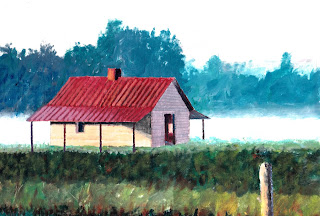 Posted by Nick Nuko at 7:47 AM No comments:
Email ThisBlogThis!Share to TwitterShare to FacebookShare to Pinterest

The universe on its appointed round
looks down upon the suffrance and moves on.
If I be quite proud, it looks on blankly
and should I laugh, the universe hears naught.
Yet, even so, I'll be a little proud
and play the antick to quicken this heart,
the mind and passions will be satisfied.
But on the wheel of memories I'm broken:
In journeys through fragmented hills
I've passed the vexing cave,
court of the banished king.
Rosalind, you followed in exile;
why do you now haunt every chamber
of my mind and leave me opening doors?
Were the lover's unsigned note,
the unmade bed to sadden me?
You took that day the first man before you,
as a ruffian in the alehouse chooses.
Child of a misogynist, turn to me.
How will your wrastler lover be tomorrow?
Are not your sisters silenced in the end—
Upon the falsehood through the night I brood.
I nod, and Rosalind and hour dissolve.
Dance, morris-men, dance for the universe,
lest the light and the fire of the sun
collapse into darkness with dreams.

Posted by eolone at 7:06 PM No comments:
Email ThisBlogThis!Share to TwitterShare to FacebookShare to Pinterest

Janine Davies decided to end the year with another magazine interview of the Wicca Horror Show. It wasn't the show's Goth-glam hostess that intrigued her as much as its cynical producer; his ascetic wit hit the right note with homemakers taking a coffee break. She took the stage chair backed against the second-floor patio doors and waited for Ed to perch on the stage edge.

Ed got down to business. "Get that painting appraised before hanging a two-dollar tag on it at your garage sale."

"Sound advice." Janine wrote it down, grinning. "Not the voice of experience, I hope."

Janine checked her notes. "I'm  not familiar with this 'Soma Beach' reference in Saturday night's script."

"There's no such place," Wicca said from her corner wing chair. "It means he's a soma beach! Ha ha ha!"

Janine had given up trying to interview the mercurial hostess. The woman might come out of the vampish dress, but she never came out of character. Undead mage indeed.

"Here's one," Wicca offered. "If you dream you're two inches tall, watch out for the cat."

"Yowzuh bowzuh!" For Janine's benefit, Wicca clarified. "That's like when those Thunderbirds puppets sign off with 'F A B'. No one knows what it means--maybe short for 'fabulous'--but that's a fussy thing for a spaceman to say."

Ed grimaced. "Getting back to Earth-if you don't pick up pennies, you won't fall for the penny-glued-to-the-floor gag." He took a bow. "When you jog, don't let the abs bounce along for the ride--keep 'em taut."

"Let me catch up," Janine said, scribbling. "This could signal the onset of writer's block."

Wicca rolled eyes. "Watch out for him. He loves to teach."

"I do have trouble with commas," Janine admitted. "Take this line from another article: 'The storm brought wind and hail later'. Does it  need a comma?"

"Of course." Ed shrugged. "Wind and hail are in the future. Put a comma after 'wind', and you bring 'wind' into the present."

Janine wrote: "Without the comma we have 'The storm brought wind and hail later'."

"You need a comma after comma," Ed pointed out over her shoulder. "Otherwise it says 'without the comma we have', making 'comma' the subject, with 'wind and hail' as the consequence. Weird!"

Janine rose, notepad in hand. "Where is she going?"

"The break room." Ed waved her to follow out of the studio and across the hall. "Your readers should like this."

Wicca got into a box of chocolate booze bottles, this one a variety of scotch recipes from Scotland. She unwrapped one, bit off the chocolate cap, spat it onto the table. The helmeted dwarf sidekick, Hecabano, avidly scooped it up. He did the same for the small discarded bottle after Wicca took the shot.

"Eeergg." Wicca's mouth went aslant. "Scratch this one--tastes like bacon." She unwrapped another.

Ed swept an arm in flourish. "Some freak show, eh? And those booze bottles cost better than sixty bucks."

"I'll bring her one," Janine said, jotting it all down. "Maybe that will keep her seated long enough to try another interview." 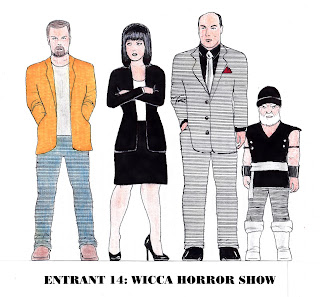 Posted by Nick Nuko at 8:34 AM No comments:
Email ThisBlogThis!Share to TwitterShare to FacebookShare to Pinterest
Newer Posts Older Posts Home
Subscribe to: Posts (Atom)