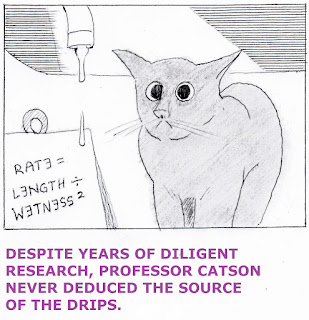 Posted by Nick Nuko at 12:06 PM No comments:
Email ThisBlogThis!Share to TwitterShare to FacebookShare to Pinterest

Dawn wore a blue dress
this morning
I saw her scampering up the hill
to the apple tree
covered by forged mantle of green
jeweled in gold
sculptured as in tempest
mountainous sculpture
towering and towering
upheaving and exploding
a dragon's lair — night within
Dawn stood a moment
looking up into the darkness
and seeing a bough coming down to reach her
she shinnied up in the early morn
disappearing into the night
But then from out the tree—
from out the branches and leaves
from the darkness within
her hair streamed down
swayed softly back and forth—
golden rays
against the mist
the calm
the sleeping earth
I went to her when she had stopped
she seemed so small-
a trace of blue in so large a heaven
her hair yet flowing down
as she lay
I asked what she was doing so still
she said: dreaming
and I asked: of princes and castles and roses
she answered: just...just dreaming
I gazed at her in her dream
wondering what kind of lady she would be—
a dreamer
a conqueror
a windswept mystical lady
a priestess
a wanderer
As I gazed
I loved
She turned her eyes to mine
as though she knew but I...looked away
She sat up
reached out her hand to an apple
took it
and drew it to her lips
slowly
dreamily
like the dawn
Posted by eolone at 11:46 AM No comments:
Email ThisBlogThis!Share to TwitterShare to FacebookShare to Pinterest

Words and brush: Character Descriptions: Good evening. I hope everyone has had a great couple weeks of productivity in their art or writing or both.  My topic tonight is o...
Posted by Laura J at 5:25 PM No comments:
Email ThisBlogThis!Share to TwitterShare to FacebookShare to Pinterest


Good evening. I hope everyone has had a great couple weeks of productivity in their art or writing or both.  My topic tonight is on how authors describe their characters?  I tend to use a brief short paragraph or sentence to give a precise mental picture what I see to the reader.   I also have character sketches with their habits and traits, strengths and weaknesses, I might include a bad habit as well.

How do you relate to your way of sharing how the characters reveal themselves?

On another contrasting thought, an artist makes a portrait of themselves such as Picasso or Van Gogh. Might this be true in fiction writers?  I might have seen a bit of some characters reflecting the writer themselves.    The writer and artist both strives to express themselves well in their craft. 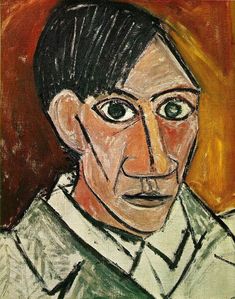 Posted by Laura J at 4:48 PM No comments:
Email ThisBlogThis!Share to TwitterShare to FacebookShare to Pinterest
Labels: Laura J

The Face In The Floor

The marble floor tiles in Sergio's cottage had long been the envy of his neighbors. Legend had it that the irregular pieces were leftovers from an ancient quarry, expertly fitted by a quarry master to pay a debt. All this came to grief the day the face appeared in one of the tiles.

Sergio's wife Lorena made the discovery in the best wifely tradition: dropping a platter of food with a scream. What began as a vague visage acted like a stain that would not be wiped away. Each passing day brought the thing increasingly human features, if one could call it that. Lorena didn't. She thought it was a lost soul looking for redress of some grievance. That this had to happen in her kitchen was a source of much discomfiture. In desperation, Sergio tried defacing the square with abrasive, to no avail. When he pried up the tile, there appeared on the soil a chalky outline that seemed to have no limit to its depth.

"Someone is buried here," Lorena decided. She also decided not to be around when the lost soul acquired the ability to either come out of the ground or to speak. And so the couple moved in with her mother for the time being. Sergio consulted the village elder in his forest hut.

The old man puffed on his pipe, nodding at the details. "That's the old general's quarters. I'm surprised it took so long to come to this. You see, the Roman Fifth Hispania was once based here. The quarryman offered the general a  new floor if he'd stop pursuing his wife. But after the floor was done, the quarryman suffered a suspicious and fatal accident. The bereaved widow accused the general, who had her exiled. Increasingly, strange things began to happen, and the general insisted the place was haunted. One day, he was found hanging from a crossbeam. Suicide? Who can say."

Sergio, despite his fear, felt compelled to go back; he'd sunk all his savings into the place, and he couldn't abide his mother-in-law's sharp tongue. Better to test the spirits than suffer the death of a thousand pecks. He stole into the cottage one evening.

Now there were two images. One was a rough-featured peasant with his hands around the neck of a patrician in opulent robes. A phantom breeze troubled the place, carrying a cacophony of voices as if a spectral audience was cheering its favorites.

Sergio had the place torn down, though he got a good price for the used marble from a foreign buyer. In time, the cursed plot grew a verdant cover of grass. On still days, when the blades are untroubled by wind, a certain grassy spot takes on an eerie semblance to a pair of combatants locked in infernal struggle. 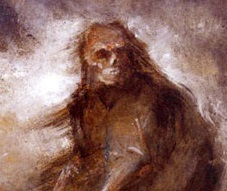 Posted by Nick Nuko at 9:13 AM No comments:
Email ThisBlogThis!Share to TwitterShare to FacebookShare to Pinterest
Newer Posts Older Posts Home
Subscribe to: Posts (Atom)