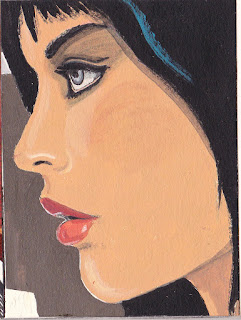 The four principals of the horror show unwound in the break room, still in costume after the live taping ended at midnight. Ed's sportcoat draped his chair, where he sat huddled over coffee and a notebook. His latest article for the ladies mag was morphing into a sort of dis-ode to summer. Which he hated.

The dwarf Hecabano counted himself a kindred spirit, hailing as he did from the frozen Yaglukk region of the Outworld. Ed, though, tended to let little things get to him. "Pray, Master Ed, how does summer bring you such discord?" He frowned at Wicca in her black stage dress, currently on a Raiders kick. The music of Paul Revere rocked the pad in her hands.

"Where do I start?" Ed glanced at the vampire Cambris. "What's your take on gettin' hot and sweaty?"

"I do not sweat," Cambris replied in sepulchral matter-of-fact.

"So then," Wicca chimed in. "What have you been scribbling over there?"

Ed scanned the list. "How about poison plants. And fleas, mosquitos, and tunneling mites." He stood up and raised his T to show three welts on his abdomen. "There's more on my arms and shoulders. How does something microscopic raise so much hell?"

"Avoid that wood pile," Hecabano advised, "where you play with the ants and termites."

"Yeah, well. . . ." Ed eased back down. "Only two more months of this summer nonsense, then it's the start of the holiday season."

Cambris raised a brow over a blazing gold iris and pupil. "They have set it back so overmuch?--to September the first?"

"Sure. They can't wait to import the European specialties like the choco-booze bottles Wicca likes to swill. Before then, it's too hot."

Talent agent J B Bigmon wandered in. "Great show, people. I especially liked when Cambris threw the flaming skull at the swamp guys." 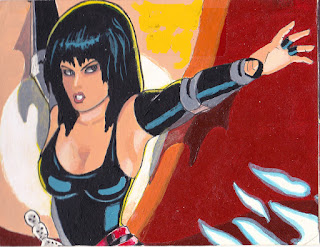 Filming it through a scry orb had made it possible to capture Cambris' image. "Hey--I'm steppin' out with Bunny. But first, an upload of my special ladies!"

Bigmon bent beside her to film his beaming face next to her scowl. He went around to do the same with Cambris, mystified when her image didn't show up in the file. "How does she do that? Ed, you gotta clue me in on these special effects. They must be costin' us a bundle."

Cambris' glowing eyes followed him out when he left.

"Forget it," Ed said. "You know the rules, Cambris--bad guys only."

Now Ed was favored by her predatory gaze. "Ah, but he is beefy, and has disdained that horrid-tasting poison being foisted apace on the populace."

"That's the spirit! Wax poetic for me, so I can finish this article with a dash of style."

Hecabano leaned close. "She will need to be watched. You have enough experience at babysitting vampires to write a learned treatise."

"What is this, horned one?" Cambris eyed him sideways.

"Oh, nothing, Mistress Cambris. I merely reminded him of the need for a chaperone."

Wicca turned up the volume. "Ooh. . . .this one's my favorite." The Raiders performed Where The Action Is.

Posted by Nick Nuko at 8:14 AM No comments:
Email ThisBlogThis!Share to TwitterShare to FacebookShare to Pinterest
Newer Posts Older Posts Home
Subscribe to: Posts (Atom)