The Dracula brides have featured in numerous stories, but as for Drac's daughter--much more powerful--there's only a subplot. You wouldn't put this much detail into just any of your story people. Though this one isn't a major player, she is sorta photogenic. 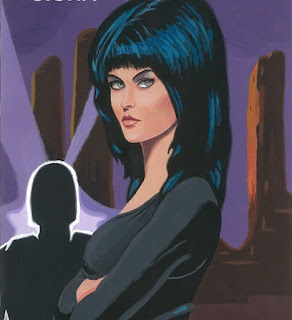 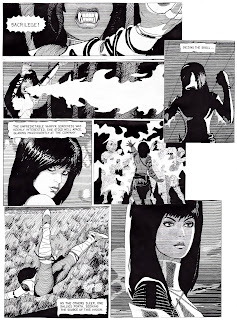 Posted by Nick Nuko at 2:27 PM No comments:
Email ThisBlogThis!Share to TwitterShare to FacebookShare to Pinterest

[Ed. note: these are the characters as imagined. Does it help, or should this be left to the narrative?] 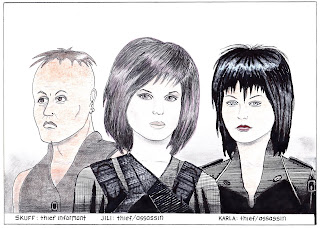 Canal District, in the Old Quarter

Six wrapped bodies lay stacked outside Dug's Sporting Emporium. Sloppy advertising it may be, but the lure of prize money ensured a steady supply of contestants. The Canal District was now enemy turf, pried away from Karst, King of Thieves. Jili timed her entry with a trio of tipsy sailors, ghosting past the doorside hawker.

Through drifts of narcotic smoke, spectators cheered their favorites in the gladiator cage. Jili's money went to a wiry mercenary who'd obviously seen his share of combat. He squared off against the star attraction, whose official designation was "skeletoid, self-assembling", or more popularly, a "resurrector". The dark realms fugitive was crazily illegal, though Dug kept the city watch bribed to overlook it.

The mercenary ducked and rolled away from the enemy's blade, made a backhand slice that took off a skeletal leg at the knee. He followed up with an overhead strike that split the foe from clavicle to pelvis. Groans and cheers greeted this, and the winner scurried out while the skeletoid began reassembling itself.

"Hold off that shower," ordered a bucket man. "Couple o' bits ain't come back yet. We don't wanna wash 'em down the drain."

The undead lurched erect, sword in hand, glaring hate from pinpoint lights in the eye sockets. Years of service had left gaps in his frame, but he soldiered on, his spirit bound to his mortal remains. One attendant held him at bay with a pole while a second sluiced away a tract of the mercenary's blood.

Jili collected her winnings as two rapid-fire drummers set the beat for caterwauling horns. Two bruisers at a curtained alcove offered no more than a sneer at her passage to Dug's office; even assassins obeyed the rule about orderly escalation. Attacking Dug would be way out of proportion to the loss of Crimpo, whose death marked the opening round of whatever Dug's game was.

Dug's downstairs lair featured a sewer grate in one corner for quick exit if things got stupid. Little else adorned the mildewed blocks. Flanked by a pair of lieutenants, he leaned back to put his feet on a battered desk. "Welllll," he drawled. "I though you wasn't gonna get the message. Ready to fight my boney yet?"

"Crimpo was a mistake," Jili said. Loss of the smiling informant left his sidekick Stomper, basically a giant kid, moping about like a lost soul. Drums upstairs thumped a muffled cadence.

Dug made a show of spitting into the grate. "I heard about that. You gonna do one of my boys? I don't think your boss has the stomach for a war."

"I heard that too." Dug probed his teeth with his tongue. "There's talk the old boy can't control his top assassin anymore. You goin' rogue, Jili? You know what it takes to send me back to the swamp district. I figure the terms sorta even the odds against the boney."

Some odds. Jili would give up weapons and magic, thanks to a magic-blank collar. And it still depended on Dug keeping his word. "Wait for my play--then you'll have your answer." She let him chew on that.

Upstairs, a veritable junk yard lay about the cage, composed of various missiles hurled by the fans. Kettle fires nestled among cast-off pipes and fittings. They cast wan light on the next entrant, a peasant with a common law wife to support, by the looks of him. He clung to the upper reaches as the boney stomped around, enduring a storm of catcalls. Finally the rain of projectiles dislodged him, and he fell to a quick death under the boney's sword. Two men fended off the skeletoid while a third dragged the body out. Bucket men washed away the mess.

Suddenly the catcalls subsided, and Jili found herself the center of attention. The boney gripped the links and stared at her. What fresh horror was this? Add it to a litany of dark powers coming into bloom.

"Mistress of the Dead!" called out some wag. Taunts of "fight, fight!" broke out. Bottles and refuse hastened Jili's ignominious departure.

Jili took refuge in a concrete tube that housed a stairway to the canal bridge. There was no denying it at this point: the changes were about to morph into  something not quite human. Maybe she belonged in a freak show.

Karla appeared beside her. "Looks like it could have gone better."

"I delivered the message," Jili said without elaboration.

"So what's the play? We have to do right by Crimpo."

"I'm paying a little call on the High Inquestor."

Karla rolled eyes in appeal to the gods. "Cripes, Jils, that blows the escalation rule out of the water. There's no telling what the other side will do."

Skuff wandered over. "That's plain enough. Every ponk on the South Side will be lookin' over his shoulder for a month!" At the low canal wall, he spotted two men tying up a skiff next to submerged steps coming out of the water. Nearby, a boy plucked medicinal plants beneath the water line, for sale to magic shops hidden from the Inquest.

Ankle deep on the steps, the bow tender looked up. "I'll mind the jib, Froggo. You mind the drinkin'."

It only deepened the rasp of Skuff's burr. "I'll whip yer ass, ya whoreson!"

Karla sliced jerky with one of her stilettos. "How has he lived so long?"

"Too ornery to die," Jili decided.

The skiffers began dragging bodies for disposal at sea. Beside the most recent--the unfortunate clinger--a shawled woman with a small boy wailed.

Jili beckoned the lad, as yet too young to be leery of strangers. She tossed him her winnings from the fight.

As he scampered away with the prize, Karla made a breathless laugh. "Why'd you do that?"

"To show the goddess I'm not a monster, even if I'm turning into one." Jili offered a cracked grin of assurance. "I'll check in tomorrow."

The denizens here knew her by name and reputation, and put up no challenge to her passage. They knew of twin blades that sprung to hand from nowhere; an explosive star spell whose power depended on how long she held it before release; about stealth magic that even--at high cost--obscured her very shadow.

In due time she reached the western arm of the river Brue. Oft times it was possible to flag a passing ship. A fishing scow glided to an expert stop along the retaining wall.

At the fantail, she admired the goddess' handiwork out beyond the boat's wake. Leaden cloud strips skated above the aft boom. A slanted sunbeam raked the waters, broke into prismed spray, where blackface gulls dove at fish roiled by the passage.

"Say," a rigger called from the poop. "Ain't nothin' out here but the Inquest temple."