The Poet of J Street 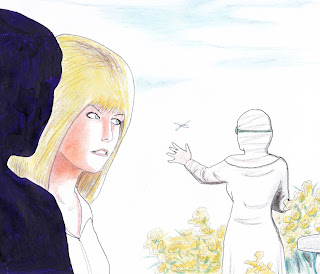 Their reserved table lacked its checkered cloth in the current disinfection hysteria. A waiter sidled up and muttered something behind his face cover.

Ed reached to tug it down, to the man's horror. "Can't hear ya behind that jock strap, Mumbles. Anyway, here's what we'll have." For Hecabano, it was the usual hoagie with large "suicide"--all sodas mixed together. Ed went light with a grilled cheese and bacon, because he wasn't here to eat.

"And the lady?" Mumbles said, having retreated  behind his useless security blanket. His eyes took in the way her goggle bug orbs swept him appraisingly.

"The lady will pass," Hecabano said, "fortunately for you and your staff." He paused to make sure no one was eavesdropping behind the high-back booths. "You go to great lengths, Master Ed, to get yourself out of a scrape."

"Yeah, what's new." Ed slurped the coffee. "Ahh, that's good." He considered the immobile spacewoman across from him. At most, she could tolerate an hour of this before having to mist back inside the steel coffee mug on his belt. "That reporter from the lady's mag is good PR for us. Somehow she got the idea I'm a writer, and now she wants to see some poetry."

"Which is where Miss Cambris comes in." Hecabano eyed her in turn. "But why here? She can wax poetic anywhere."

Ed leaned back to allow room for the nervous waiter to deposit the food and scurry away. "Because I've always been moved by this place when there's a light rain. Reminds me of a sleepy town in South Carolina I once caught a train in. It's my kind of day."

"I abhor the day," Cambris said.

"Understandable," Ed allowed. "Attune yourself to the outdoors and gimme an impression."

Ed wrote it down, looked up when a coed type stopped to admire the talking bio suit.

"Whoa--where can I get one of those?"

"Move along, Betty." Ed scanned his three lines. "These are good impressions, but I need to tie 'em together."

"Drained wraiths evanesce in misty vortex, shrinking away as the Brides awake--"

"Cambris!' Ed had stopped scribbling. "You're going the wrong way. This is supposed to be a feel-good deal."

Hecabano had finished his power munch of the sub, tossed down the wadded napkin. "Perhaps not, Master Ed. It's practically Halloween."

"Everybody and his cat is doing Halloween," Ed griped.

"A comparison, then. Portray this as the eve of Spook Night: tranquil by day, which we drink in before the freaks come out. Much like in the old Castlevania game, when leisurely exploring was out of the question when night fell."

Ed jotted it down. "You're a bit of a poet yourself, Hec."

The mercurial Cambris had had enough. "Remember our bargain: you will find me some scofflaws tonight." She melted into a mist that flowed across the table in search of the steel coffee mug on Ed's belt. Its drinking slot snicked shut. Luckily, no one had noticed.

"The queen has spoken," Ed said. "Too bad Emmy can't speak, considering how she loves the daytime." Emmy was the only one of the four brides who gleefully used the full hour of possible daytime outing.

On their way out, they were accosted by Mumbles.

"Big protest tonight," Mumbles mumbled behind the thick cloth. "Over in Bigley Park. Come on out if you want."

"Do tell." Ed lightly drummed fingers on the steel mug.

Posted by Nick Nuko at 1:28 PM No comments:
Email ThisBlogThis!Share to TwitterShare to FacebookShare to Pinterest 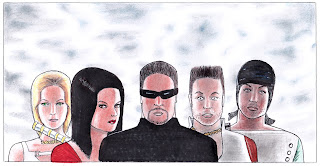 6x11 on printer paper (not the best to use), colored pencil and ink. A marbled sky makes a simple but realistic background: radiate clouds from the central figure for a little dramatic effect. Though the sky is bright, conditions on the ground will be a little gloomy, with diffuse light coming from either side. Characters must show these effects in order to fit into the scene in a convincing way. I wonder if anyone can guess who they are.

Posted by Nick Nuko at 1:57 PM No comments:
Email ThisBlogThis!Share to TwitterShare to FacebookShare to Pinterest 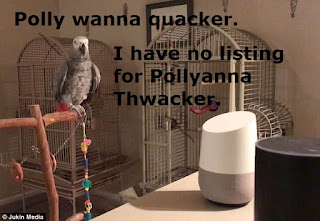 Posted by Nick Nuko at 3:24 PM No comments:
Email ThisBlogThis!Share to TwitterShare to FacebookShare to Pinterest 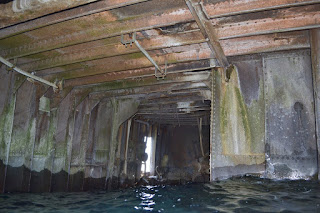 Ten-year-old Dila watched a bar of sunlight flicker on greenish water inside the shipwreck. The fleeting effect offered little time for capturing in words, being a phenomenon of low tide. Today's club diary wouldn't have an entry about another day at the beach; people who read it in years to come needed to experience a magical moment.

Gentle surf boomed hollow against the hull, as rhythmic as the ripples cavorting on the sun patch. This could just as well be at the end of the world as a short distance offshore. Tarred timber smell pinched at Dila's nose, with brine and fish making their nose flavors known. Or would a land lubber even understand that?

Dila hoisted out of waist-depth to sit on a stiffener beam, her thighs feeling the chill of air currents. With legs dangling in the water, she opened a watertight case and jotted down some ideas. Interruption intruded from outside: Little Pete was doing another boulder dive off the stern castle.

"Kids," Dila muttered. She hopped down and waded into the sunny spot, capturing herself in glittering sparkles. Still there seemed no way to pass the experience on to posterity. Outside the hole, a painfully bright horizon met the bluff at West Bend, the distant beach blanket franchise of the rich. Suddenly a face rose into view: Little Ed come to investigate.

"What are you doing down here all by yourself, Dila?" His fake beard, which all three boys had in imitation of Team Dan, was held in place with an elastic band.

"I'm trying to describe being inside here, for the diary."

"Not much of a story. Something needs to happen."

"No it doesn't. I want to preserve these few moments when water reflections dance overhead."

Dila frowned. "I'm not sure Zena does poetry." Both Dila and her older sister Dela channeled Zena, Team Dan's rebel-yell swordswoman. Since both couldn't use the moniker, they went by their given names. Outside, both Little Pete and Little Dan crashed into the sea. "Do you think the tide could float this thing away?"

Little Ed leaned arms on the hole. "I don't see how. There's no bottom."\

That explained the squishy silt beneath Dila's feet. Some swimming critter bumped her leg. She drew the wood sword tucked behind her dress and delivered a mighty overhead swing. "Hi-yeee!" All it got her was soaked by a mighty splash. "Arrrr. Mutt-mutt crabs!" The expression was her take on the popular "twice a cur".

Now chest deep, Dila wasn't ready to give up. "Come on, Ed, how do I describe this before it all changes?" They traded rather profound looks. "What?"

Ed stared at the light, which had begun to bend up the far side of the hull. "Dila, do you think we're changing?"

The notion hadn't occurred to her. Time and tide, she had heard Zena say, wait for no man. Nothing was ever standing still. "That's just great, Ed. Now I have to deal with feelings, as if poetry isn't hard enough."

Ed cringed. "Hey, we're teammates. I'm not staring or anything." He brushed at water spilling over the rim of the hole. "I guess us guys will have real beards before too long." Dila reached across, and he pulled her out.

As they waded toward shore and the waiting clubhouse on the hill, Dila came to a decision. "You've given me an idea, Ed. I'm  going to record this day as our first thoughts about growing up."

"Boogity!" Still a kid for now, Ed surged ahead in an impromptu race.