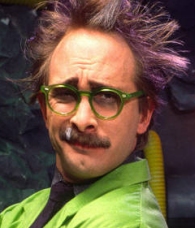 Clayton Forrester  Happy Saturday, spacemen! How's that for alphabet soup? I refer to the scifi series UFO. No, you aren't gonna riff on it--I'm gonna review it! The fanciful premise was that, by 1980, we'd have a fleet of subs, a base on the moon, and a squadron of space interceptors. It was headquartered in England, of course, being a British series. They called it SHADO: supreme headquarters, alien defense organization. The aliens were quite cooperative in keeping the war a secret from the public. 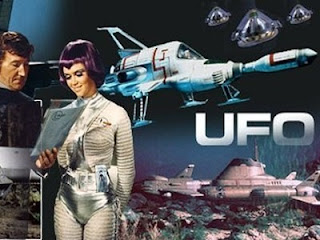 The fighters weren't the cool vipers from Battlestar. They had a single torpedo, and once it was used, the pilot was done for the day. Done period if the alien ever brought his laser to bear. They were so helpful in only fielding one at a time. 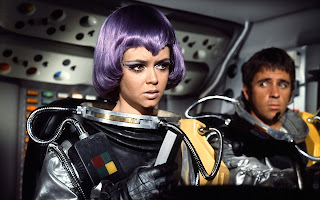 What the producers never figured out was that guys tuned in to see the moonbase flight controllers--not Ed Bishop, who hogged most of the action. An attempt was made to give them more screen time in subs, tanks, and spacesuits, but these just weren't the same as the curvaceous moonbase uniforms.
Joel  As I recall, the premise didn't have much by way of legs.
Crow  Except for Gabrielle Drake as Lieutenant Ellis!
Forrester  How about this: the aliens would naturally build a base on Mars in an effort to mount a knockout punch. For SHADO, the stakes are now the entire solar system! They might even capture an enemy ship!
Tom  Too bad they didn't have the budget.
Joel  Yeah, but just a few years later, the same design team cooked up Space: 1999. Martin Landau took too many closeups away from the gorgeous Barbara Bain.
Forrester  Can we stay on topic here? What have we learned from this?
Crow  When it comes to scifi, no women equals no show.
Forrester  Well, true, but. . . .okay, you're onto something there.

Posted by Nick Nuko at 2:30 PM No comments:
Email ThisBlogThis!Share to TwitterShare to FacebookShare to Pinterest 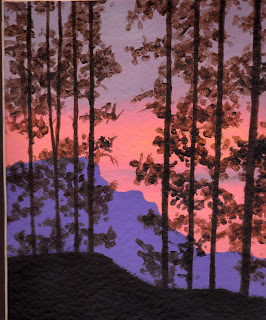 This detail from a 16x24 was modeled after a coffee ad in back of a magazine, minus the product and its logo. The presentation is very simple, with no real detail. It relies on what the ad men intended: a soothing panorama of harmonizing colors. That also makes it fun to paint, as you can ad you own interpretation. Not seen is the reflecting pool I added at the bottom. which mirrors the peach sky. Try this source of inspiration for yourself, if only in practice. It might end up being a displayed work for many years, like this one, which has a calming influence in a bedroom.

Posted by Nick Nuko at 6:41 AM No comments:
Email ThisBlogThis!Share to TwitterShare to FacebookShare to Pinterest
Newer Posts Older Posts Home
Subscribe to: Posts (Atom)