Faces Not in the Mirror 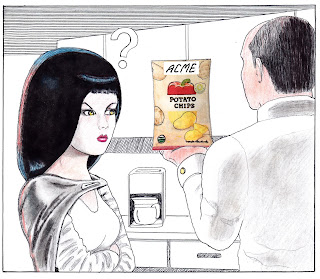 Talent agent J B Bigmon paced the studio break room, not sure what worried him most: braving the Quantum Dream Project, or preparing for it with help from two equally dangerous ladies. An android and a vampire, of all things, who never came out of character. He still had no idea what the android chick looked like inside that gold armor. Maybe that was a good thing, since they really threw themselves into their acting.

Cambris swept in under the late night fluorescents, bearing a tall paper cup. Bigmon marveled at hair so black it sucked lumens out of the room to power its blue sheen. She offered him the cup.

"The beverage you requested, Agent Man. Your producer Ed says 'It's considered fashionable to make the scene with 7-11 coffee'."

"That's only if it's yours," Bigmon said, popping the lid for a sip. "Sure you don't want anything?"

Grey eyes narrowed appraisingly. "I have on this eventide seen to my necessity. I am told you seek my advisement."

Bigmon opened a bag of chips she regarded with a raised brow. "Still won't eat in public? I gotta admire the whole Shakespeare vampire shtick."

A gold-tone android came in, wearing a black punk 'do. "It denotes a comedy routine with pseudo-Hebrew slang."

"Ahhh!" Bigmon spread arms approvingly. "Queenie, I don't know how you guys did it, but that scrap between you two wrecked the studio. Best ratings week we ever had! But I wanted to rap with you gals before I go traipsing off into Munster land. Only I get a sense you don't get along."

The android definitely had a provocative streak. She raised a mirror which failed to reflect Cambris. But it did draw a hiss and fang show.

Bigmon guffawed. "How do you do that? It's a trick mirror!"

"I am an impossibility," Cambris informed. "One who is yet is not. Only a living brain can be fooled by my violation of natural law."

"Magic does not exist," Queenie intoned. "I shall duplicate the anomaly." Sure enough, she faded from the mirror. "I have selectively altered the path of light around my form."

"At what cost," Cambris insisted, "to whatever foul brew fuels your gears and springs? Agent Man--retrieve the second glass from yon drawer." Bigmon did as directed, noting the absence of Cambris in both. Queenie, however, reflected in both.

"The effect is necessarily unidirectional," the Bot queen pointed out.

Bigmon grinned. "Then how does Cambris do it? This is high class special effects!" He put the mirrors away. Studying the ladies over his cup, he came to a solution.

"Look here, ladies--there's a guy who went in the Gilligan's Island holosuite and got bit on the neck. There was this episode where Gilligan turned into a vampire in a dream."

Bigmon took a hurried gulp of coffee. "You don't get it. I'd feel safer if all three of us pay a call on the Munsters."

The ladies deigned to look at each other. He had them.

"This is gonna be epic!" Bigmon crowed. "A toast!" He offered Cambris a sip, but she did the fang thing again.

Posted by Nick Nuko at 5:22 PM No comments:
Email ThisBlogThis!Share to TwitterShare to FacebookShare to Pinterest 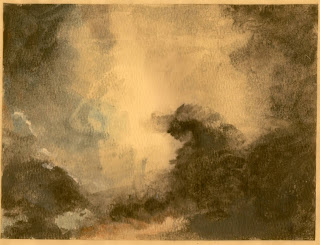 This 6x8 acrylic has been posted before, but the mood is altered by a yellow filter. It lends the scene the look of a rainy day in summer. Making prints of existing pictures, altered with new interpretations, is a good way to expand your collection.

Posted by Nick Nuko at 10:30 AM No comments:
Email ThisBlogThis!Share to TwitterShare to FacebookShare to Pinterest
Newer Posts Older Posts Home
Subscribe to: Posts (Atom)