Should One Protagonist Stand Out?

That first  novel is often a whopper. We pack in every idea spawned by TV, books, games. Into this brew we drop a boatload of gonzo characters who all want equal time, and pull in different directions. Further swelling the page count is the need to intro the story world--and that's a lot of pontificating. My own instructor recognized that with the comment "There is no protagonist." Having made the corrections, I must agree. Without a standout lead, you end up with Battlestar Galactica. 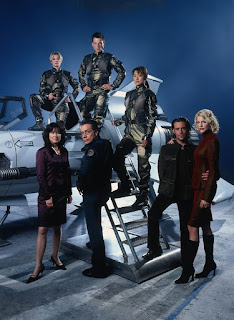 Hold on, you say--that was a hit show. For one thing, TV gives actors time to share the spotlight. For another, the premise was huge: 59,000 survivors seek a new home in the cosmos, hunted by the murderous Cylons. A plot that big positively demands a high number of big egos. How else are the humans gonna make it? In this case, the top-heavy list of villains balanced the story to a standstill. By series end, we had the feeling that nobody won. Were there ever any good guys? And since books are about people, we settle in better behind one set of eyes (not necessarily first person).

We can try paring back the playlist. For those aghast at the  notion, all is not lost. There are ways to keep the prima donnas on stage while letting the top dog stay on top. Consider spinning them off to their own series, or letting them star in sequels.

Word economy makes the most of their time on stage. While we enjoy the minutiae of the hero's journey, there isn't time to indulge just anybody. Here'e what's likely to happen when a secondary character springs a flashback chapter to his childhood: el skippo, amigo--let's get on with it.

Which brings up relevance. If a shadowy thief mixes up a zombie potion, it needs to be sprung on some high-level baddie, sooner rather than later. That justifies the three pages we spent watching him do it. In the Locke Lamora series, two partners use a host of secondaries to con their way into the high life. We don't mind savoring that vicariously, since their knowledge of objects d'art is how they make money to stay in the game.

Still, it pays to concentrate on whomever makes the biggest mark on the story. It's fine to let supporting actors shine if you don't let them get out of control. The stronger they are, the more they help the hero reach his goal, and the more they bring him to life.


Posted by Nick Nuko at 6:58 AM No comments:
Email ThisBlogThis!Share to TwitterShare to FacebookShare to Pinterest

Good afternoon fellow writers, artists and to the creativity.  My weeks and days have been keeping up with the Homefront.  It doesn't seem like much, being home but I assure you we find quite a bit to do throughout the day since our quarantine started March 13th.   Long time but hope you all are getting progress done with your projects or started new ones.
I have noticed a lot of people in our neighborhood are utilizing their time with yard projects or home projects.   Might you be one of them?  We transitioned our daughter's bed to a loft bed.   Anything inspiring you to do the same?  Show us your projects! 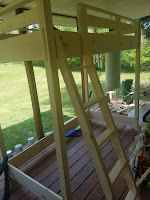 Posted by Laura J at 12:26 PM No comments:
Email ThisBlogThis!Share to TwitterShare to FacebookShare to Pinterest 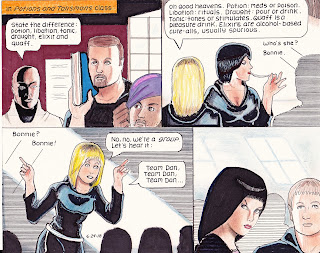 Fresh from the academy's Potions and Talismans course, the five members of Team Dan embarked on their next class, Undead Forms. They benefited hugely from the book smarts of their blonde wizardress, Bonnie. It should have been fun, being one of those group courses. Unlike Weapons and Tactics, taken by fighters, or Channeling, taken by spell casters, it was a team effort.

Groaning students filed into semicircular tiers of seats facing the podium. The room buzzed with converse as they awaited the magister. Bonnie, eagerly opening her text next to the black-haired sorceress Zena, cast a despairing eye toward the fellas: team leader Dan, Pete, and Ed.

"What's with you guys?" Bonnie gushed. "This one is even more fun than the talismans class."

Zena cracked her gum. "Like all I wanna do is get out there and bash things." She had indeed taken a fearsome toll on mumps and other skeletoids in the labyrinth, the haunted domain where newbie teams cut their teeth.

"Let the guys do that," Bonnie insisted. "You're supposed to support them with offensive magic, while I use defensive magic." She suspected a repeat of the previous class, where students slouched and tried to look invisible when the magister floated a question. Good old Bonnie knew all that book jazz.

The class quieted when the stout magister, dubbed Professor Chromedome by Ed, came in and pulled down a chart. He pointed a stick at a grouping of grotesque shapes. "These are forms you won't encounter in the labyrinth, since no team in recent history has ventured below sub-level five. You will, however, see them in the dark realms, the Blight, and elsewhere. Let's begin with a review."

Students suddenly looked two feet tall, their heads barely visible over the chair backs. The magister posed his quiz. "Define and contrast the following: lich, wight, wraith, and phantasm." Had crickets been present, the classroom would have been a noisy place.

Zena felt an encouraging poke from Bonnie. "Like, ow, lady."

"Oh, good heavens." Bonnie launched into the spiel. "A lich is a poisonous corpse infesting graveyards. Hence the term 'lich gate', an arched structure where a coffin awaited its occupant." The class sighed collective relief. "A wight is a hybrid form of more advanced decay, to the point of being mostly insubstantial. Since their touch drains energy, captured ones are used for torture and brainwashing of prisoners." She paused, but no one took up the slack. "A wraith is a ghostly guardian, often resembling the deceased just before or after death, though its face is hidden in the cowl. They can pass through walls in tombs."

"And the  most dangerous?" prompted the magister.

"Phantasms. These are created by dark magic, and inflict a life drain by their touch. It's how they seek temporary relief from being enveloped by spirit flames. They're hard to avoid, because they rapidly blink in and out of view during short-term teleports. Their visage can paralyze victims with fear: you see this howling thing with flailing, contorted limbs coming at you."

"Superior, Miss Bonnie." The magister singled out Pete. "How does one differentiate wights and wraiths in a tactical situation?"

"Yook?" Pete tugged at his magenta head wrap. "They don't look too different. I'd be lookin' for it to pass through a solid object before makin' the call."

"In an open field?" the magister challenged. "You'll need to retreat until a suitable object presents. In the meantime, you've exposed the team to additional threats."

"And your solution, Miss Zena?" The magister waited.

"Well, like. . . .a wraith has no hands coming out of those overlong sleeves. A wight has these bony white hands poking out of too-short sleeves."

Dan chuckled. "The academy should let you teach a fashion class. It has its uses."