Happy Friday!  Creativity lately has hit a snag with a cold.  They really put a chisel in the creativity with productivity in a way that leaves a creatively inclined person lack trust with themselves to make a logical decision on story writing.  It is what it is.   What project are you working on? Is it art? Is it writing?  Let us know!  Sit down with a desert with a coffee or tea and let's talk on creativity.  When age did it all start for you?  Got some stories to tell?  Maybe now is the time.  Start a journal.  I have a system. In the morning I write three pages of nonsense literally.  It clears the static and puts the mind in gear. Drop on by and let's talk about the creativity process.  Stuck on an assignment or have questions in the field of writing or art? We're here to inspire to help with your aspirations. Thank you for stopping by.

Good luck on your project!
Posted by Laura J at 3:12 PM No comments:
Email ThisBlogThis!Share to TwitterShare to FacebookShare to Pinterest

What Happened To The Magic? 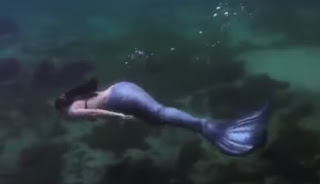 Giant drapes walled off the central mermaid bay at Five Forks Emporium. Shoppers at the sports complex weren't supposed to see rehearsals for tonight's extravaganza. Starting at eight, the mermaid trio would thrill the crowd with eye-popping stunts. Demanding the most attention, the Slide Hoop loomed large and forbidding, but someone had to calibrate it. Sirtis, the dark haired blue marmaid, volunteered.

Blonde Binia, having white and purple flukes, floated lazily next to red haired Ellie in green. They made sure to stay clear of the splash zone.

"Got reservations?" Ellie asked, hands linked behind her head.

"Hm? Oh, not about the stunt--just the necessity for them. The act is going Hollywood these days. What happened to the magic?"

"I know what you mean." Ellie went vertical, floating neck deep, watching Sirtis pull herself up the ladder. "It's more fun when the schools are here. The kids think we're the real thing."

Sirtis ventured forth, beginning a steep belly slide. Ideally, she'd sail through a large hoop--fire having been firmly declined--to dive into the lagoon. Though carefully calculated, her trajectory came up short.

"Waaaaa!" Sirtis caught the hoop low, swinging back and forth, tail and arms dangling.

Ellie laughed. "Now that's a weird catch. What the heck is it? The fishermen should throw it back."

"Ha, ha." Sirtis hung by her hands, did a flip to splash down head first. She popped up close by. "So the hoop needs to be lowered. Who's next?"

"You're doing fine," Binia insisted. "We'll be a lot more confident when you fly through in one piece."

"This bites," Sirtis groused. "Are we a circus now?"

Actually, part of the presentation was just that, adapted by a producer for a popular TV stunt show.

The suit watched from the center island. "We're on a schedule, ladies. You want to pass the audition, don't you?"

The trio eyed each other. "Audition?" they said in unison.

Some of the emporium brass loitered at the glass barrier on the service end, no doubt dreaming of TV fame and getting the complex on the map.

Sirtis swam over to the slide and hauled herself out of the water. "Mr Jeffers," she said to the producer. "There's a rough spot on the top platform. I almost lost a few scales."

Jeffers hurried up the ladder. "How can that be? It's polished aluminum."

Binia had a pained look. "She wouldn't."

"I think she would," Ellie affirmed.

Just as Jeffers crouched at the top, Sirtis' blue tail lashed out to propel him on his way.

"Woahhhhhh!" Jeffers raced down the slide, arms flailing, and sailed neatly through the hoop. He made a mighty splash, foundering like the Titanic.

Binia and Ellie got to him before he drowned.

"What the hell?" he spluttered, his mood not helped by chuckles from the service end.

"You should be honored," Binia said. "The Sirits Slap is the highlight of the show when she uses it."

The pair helped a sodden producer perch on the island edge, legs still in the water. He coughed and wiped water from his eyes.

"You can't be serious. I'm supposed to do that for the audience?" He turned to the brass in appeal.

The company president made a smiling thumbs up.

Posted by Nick Nuko at 5:20 PM No comments:
Email ThisBlogThis!Share to TwitterShare to FacebookShare to Pinterest 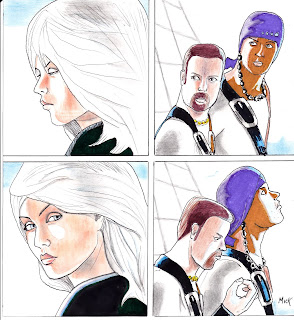 This is a 10x10 sequence created as a 'drop in' segment for a comic. Hasn't been used yet, but it features the sorceress Valkris on a ship with Ed and Pete of Team Dan. Their stealth admiration for her has gotten them in numerous comic scrapes. Other uses for such panels are 'retreads' of pages you decide aren't going anywhere, but some of the art is reusable.