Good afternoon writers and artists.  I hope you had a good week and looking forward to closing Friday with a good meal or movie etc.

I would like to extent my overwhelming thanks to our best contributor, Mick Williams.   He has kept on with the change since Disqus ended our channels.  I do like this change, most definitely.  Sometimes we have to get through that hoop.

Continuing with editing book 2, and it is going well.  Sometimes I run into a plot jam mashed into the chapters and I think, whoa.   Maybe a bit more detail and slowing down the action in this part as I compare it to Rambo?  He was a solitary warrior.  My current character is sent off to be killed off in a natural enclosure, surrounded by limestone 20 ft high, with spikes on the top and not much to climb on.   My character survives for a long time to which the enemy thinks he would be a great asset to their army.

Do you have a plot jam?  I highly recommend free writing to get clear the static and it helps the flow or get out of writer's block. There are no rules to freewriting. You just write what's on your mind even if you are bored with the process of it.

What are ways you find your way out of writer's block?
Have a great evening!


Have you ever had writer’s block?  Then you will enjoy today’s blog post by Mari McCarthy, author of Heal Your Self with Journaling Power. Mari offers three easy strategies on how to deal with writer’s block and get back on track.  Please share your thoughts in the comments section.

When you were starting as a writer, you might have thought writer’s block was something you would outgrow. Now you know better. That dreaded invisible barrier that traps brilliant ideas and keeps them hostage from the page isn’t just for newbie writers. It’s something we all struggle with from time to time.
So why does writer’s block strike when you least expect it? Here are a few reasons:

If you’re experiencing one or many of these sources of writer’s block, know that this situation is only temporary. You can and will overcome it. Think of these strategies as a toolbox you can use the next time you get stuck.

If you’ve been laboring over the same paragraph for the last hour, give your brain a break. Move your body or get some fresh air – by stretching, doing yoga poses, or taking a walk. Then come back and write something completely different than what you were working on earlier. Brainstorm new ideas or dust off an old draft. Return to your original project with new energy.

Another name I use for writer’s block is “page fright.” It is often rooted in fear, though it can reveal itself in different ways – like perfectionism, self-criticism, anxiety, and stress. But if you hide from your fear and pretend it’s not there, it only gets stronger. When you face your fear and give it a name, you take back control. In a journal or notebook, write, “I am afraid…” at the top of a new page, and jot down anything you think of, no matter how silly or off the wall it seems. Just defining that you are afraid of failure or judgment helps you chip away at the page fright.

Write through the block

Do a short sprint of writing to hurdle your stumbling blocks and build up creative momentum. Set a timer for a few minutes, and commit to writing the entire time – no distractions or breaks. Then write! Keep going until the timer sounds, and celebrate this small but important victory.

Posted by Laura J at 1:51 PM No comments:
Email ThisBlogThis!Share to TwitterShare to FacebookShare to Pinterest
Labels: Laura J

This is our first Halloween on our blog and I would like to invite you to our page.  Do you have a spooky story?  Did it really happen?  Did it give you the shivers?  Maybe you don't believe in Halloween or the Great Pumpkin, but that's ok!  We're glad you skimmed over our new page.  OUr goal here is to be a resource for writers and artists of all walks of life.   With all the happenings going on, let this be our little alcove to brainstorm or recharge that creativity.
Maybe you are struggling with an area of your art.  We'd like to know and someone here can give you that expertise.   Maybe you are a writer struggling with development or finding an angle for your story or article.  Same thing, we can help or just sit down and have a coffee or beer with us.  What happens here, stays here. 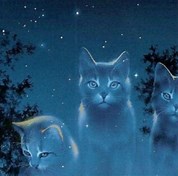 I do have a Halloween story.  It did make me think of Stephen King's Pet Cemetary for a moment.  My sister has about 5 cats and horses.   Well she lost one of her favorite cats in May.  He was the one she let in the house a lot.  This happened the last couple weeks.  My sister has been hearing meows...in the car, around the house etc.  When she looks in the hood etc. No cat.  Her daughter also hears it, too. So maybe he's a ghost cat....  I do believe in God, or the supernatural but shiver when I hear this from my sister.

Posted by Laura J at 10:50 AM No comments:
Email ThisBlogThis!Share to TwitterShare to FacebookShare to Pinterest

The challenge here is working in three dimensions across a curved surface. You might think of them as beach ball designs. For those who remember the quilt exercise, one of the beach balls might strike a chord. Start with 8.5x11 paper and draw circles of various sizes, making sure to overlap and let some go outside the border. 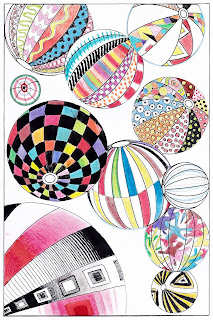 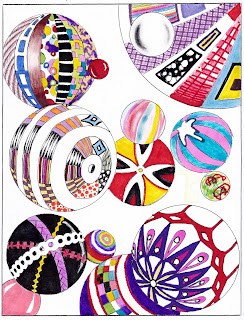 Posted by Nick Nuko at 12:04 PM No comments:
Email ThisBlogThis!Share to TwitterShare to FacebookShare to Pinterest

The Old House at Collinwood

This fanciful 7x10 view minimizes brush strokes because the emphasis is on mood. The grass has more color than we'd  normally see at night, but it stands apart from the background, which is blued for distance. It's a mystery who's making the light in this long-abandoned manor, and what lurks in the woods under a watery moon. This is where the ghost of Josette Collins is known to walk down from her portrait, as discovered by young David Collins when his frantic hands couldn't get the door knob to turn--until he realized he was turning it the wrong direction.

The 1960s soap Dark Shadows had Kathryn Leigh Scott, who normally played the waitress Maggie Evans, as Josette. One nighttime scene had Josette running toward the mansion, ghostly robes flowing. The effect was a little spoiled when she ran across the portico and cast a shadow. Today Kathryn hosts Dark Shadows reunions and publishes photo memoirs of the show. You can google the haunting opening theme.

Any kids who brave the front door on Halloween will probably encounter something scarier than their costumes. Haunted manors featured prominently in Hollywood: Addams Family, Munsters, Three Stooges, and the Hammer horror films (think Thirteen Ghosts). Not to mention anything with Vincent Price, Chris Lee, Bela and Boris. Got a favorite haunted manse? 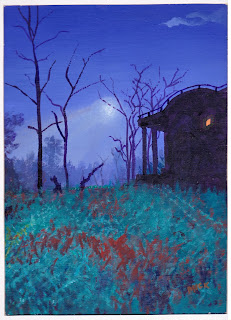 Posted by Nick Nuko at 6:23 AM No comments:
Email ThisBlogThis!Share to TwitterShare to FacebookShare to Pinterest
Newer Posts Older Posts Home
Subscribe to: Posts (Atom)