This 9x12 acrylic originated in one of the home and garden mags, which focused on sheds. I seized on the little rusted can with its arrangement of flowering weeds, a nice variation of the floral still life. The trowel, glove, and seed pack were added to give it that carefully-tended look. The wood panels make a rustic background to enhance the theme. Who says still lifes are trite? There must be any number of other ways to approach the subject. 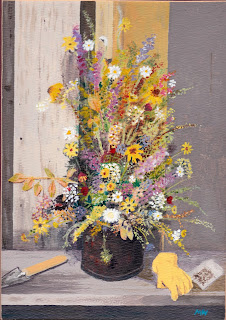 Posted by Nick Nuko at 7:36 AM No comments:
Email ThisBlogThis!Share to TwitterShare to FacebookShare to Pinterest

Professor Chaduray scanned the firelit drawing room which seated two dozen of Westerbury's upper crust socialites. They'd come to hear his lecture on the fourth dimension, a popular topic owing to recent advances in mathematics. Chaduray had rashly advertised his intent to not only explain a fourth dimension, but to access it. Nonsense, of course. When it failed, he'd simply confess to a bold experiment having come up short, and modestly offer them a refund. They in turn, much entertained, would naturally refuse.

His assistant tonight was a medium called Madame Sezny, whose Gypsy attire was no stage costume. Chaduray, lacking the arcane machinery of high science--not yet invented--sought a back door approach to the problem. Were there no mediums on the other side? Let them make the connection between each other. So went his spiel to enthralled audiences hopeful of a world-altering epiphany.

Mademe Sezny set up an easel for sketching diagrams. Next, she pushed to the fore a large, black-draped box, the erstwhile focal point of tonight's activities. Lady Tibbets, their genial hostess, shifted her bulk in the fireplace wing chair, the better to command attention. She raised opera glasses on a slender stem and fixed Chaduray with a look of matronly doubt. "Well, Professor, shall you finally prove the existence of the fourth dimension?"

"Nay, Madam." Chaduray inserted his monocle in silence broken only by fireplace crackle. "I shall posit the existence of multiple realities!" He drew on his easel the X and Y axes of the Cartesian coordinate system. "On a flat surface, we find distance between two points as the square root of X squared plus Y squared." He drew a third line through the origin, perpendicular to the others. "With the addition of a Z axis, we have our three-dimensional universe."

An old gent in back spoke up. "I say--does the equation still hold true?"

"Indubitably." Chaduray's goatee  widened around his grin. "We now find distance via the square root of our new sum: the added squares of X, Y, and Z."

"But. . ." Lady Tibbets lowered her spectacles. "You have quite run out of planes, Professor."

"Have I?" Still looking impious, Chaduray added a W plane to the mix, yet another angled line through the origin. The square root of the four sums still yielded a valid number, though it was a little smaller than a point plotted right beside it.

A portly banker. "But where is that point?"

"Right here in this room," Chaduray said. "But not in this physical plane. It is a fact that any number of planes will yield a valid numerical result. May we not conclude an infinite number of realities?" During the applause, Chaduray motioned his assistant toward the draped box. "In another such drawing room, somewhere in the cosmos--if not close at our elbows--there must exist other practitioners of the occult arts. Madame Sezny shall attempt contact, using a representation of the fourth dimension to bend her energies to that end." At his nod, she uncovered the box with a flourish.

Hushed muttering broke out, as if the company feared provoking some reaction from the black, tubular structure. It portrayed a cube within a cube, its vertices connected by slender wires.

"Ladies and gentlemen," the professor began, "I give you our best understanding of the fourth dimension, the tesseract, a 3-D representation of a fourth plane. In this iteration, it's known as a Schlegel diagram, in which all sides are equal. The tesseract is to the cube what the cube is to a square."

"Here now," objected the banker. "Obviously the smaller cube cannot have sides equal to those of the larger."

"Not in this reality," Chaduray explained. "There is a time element we cannot duplicate here. You see, the tesseract is forever in motion. Picture the inner tube passing through the larger tube's front wall, growing to become the front wall, folding back to engulf the whole, then shrinking to re-enter the back wall as the smaller cube once again. If we could unfold the tesseract at an instant in time, we would have the Dali cross: four stacked cubes attached at the next-to-topmost cube."

The audience could not comprehend the thing, none of them having a rigorous grounding in calculus. It was a necessary skill for manipulating objects mentally.

"Can you simplify it?" Lady Tibbets enjoined, studying the machine through her lenses. "I mean--can this device serve as passage to another dimension?"

"A good question," Chaduray said, pleased with the segue. "With present methods, lacking unheard-of amounts of electric power, we may only endeavor to access the adjacent universe." He made a bow to Madame Sezny. ""My assistant will now attempt contact with someone over there."

Madame Sezny went into deep concentration. Chaduray relished the apprehensive, excited faces fixated on her. His fee was well earned at this point, no matter the result.

"Look there!" a man called.

A hazy image formed with the tesseract. The manor began to creak, and windows shook in a rising moan of wind that failed to rouse the drapes. Everyone's hair and garments stood out in static charge. The image remained flat, ghostly.

"This is a symbol!" Madame Sezny said breathlessly, "conveyed by one with more skill than I!"

Chaduray paced about the visitation, noting how it quite disappeared when viewed edge-on. It was two dimensional.

"It's the knight of wards!" Sezny exclaimed. She put hands forth, to Chaduray's alarm. "It's a message from one who uses a tarot deck. This knight represents the messenger, one who speeds the journey. My journey, can't you see?"

Lady Tibbets rose from her seat, voice raised in the din. "Professor, I believe we've crossed a forbidden boundary! You must end this!"

Another image oozed through the back side of the large cube, forcing the knight forward, where it grew to encompass that side, then folded back to re-enter the small cube--just as Chaduray predicted. The new image, a chess-type tower, alternated places with the knight in precessing fashion, each taking turns folding back upon itself. Chaduray winced at the similarity to writhing intestines.

"The tower," Madame Sezny said, mesmerized. "A symbol of relocation. I know what I must do!" She reached into the tesseract, eliciting screams from the ladies, was drawn into the infernal engine. Now it was her tortured image precessing through the device, turning inside-out upon exiting the front wall, and re-assembling to enter the rear wall.

Abruptly the thing imploded with a thunderclap, leaving only drifting ectoplasm behind. Of the device there remained no trace. In the shocked aftermath, everyone crowded about, demanding answers.

Chaduray raised hands for calm. "Good people, hear me! In spite of the unexpected turn of events, I believe we have arrived at proof of our exhibition."

"What does it mean?" Lady Tibbets inquired, near tears for the victim.

"Somewhere," Chaduray said, "others like ourselves have just proved the existence of our universe. Lacking Madame Sezny's intestinal fortitude, they invited us to make the first move."

An elderly gent: "Can she hope to return? Is she all right?"

Chaduray stroked his goatee. "We can find out by hiring another spirit medium. Shall we attempt to reach out to Madame Sezny in her new reality?"

Two dozen heads nodded "no" in unison.
Posted by Nick Nuko at 1:46 PM No comments:
Email ThisBlogThis!Share to TwitterShare to FacebookShare to Pinterest

If you think it can't happen, it can. During the course of three years I finally finished my second book. Years and years of revisions and modifications that it was finally finished in a way that I could go back and fix areas that need attention. During that whole time I forgot, literally forgot to back up my work that was all on my flash drive and not anywhere else. It was that sense of panic when my flash drive stopped connecting to computers. It was a sense of devastation of a different kind.
So I began a search for the right place and person to recover my data on a flash drive. No two flashdrives are alike. Beware of the monolith flash drive which I had. I looked at companies that quoted thousands of dollars to five hundred dollars. It would require surgery and attach wires carefully so my monolith flash drive would be recovered correctly. Many companies said it would be difficult and time consuming How depressing that most companies were into price gouging to the unsuspecting consumer in a dilemma.
It took a month and a half to do some soul searching for myself and reaffirm what my goals are. I could rewrite my story, go back to the previous saved work before my entire updated version. And never think you will not use the paper print out of your work as a physical backup.
So I prayed to God about this problem. I asked him if he wants me to make this book, show me the right person to be trustworthy and good person. My search eventually led me to a place that only recovers flash drives. He had a five star rating and a 98% success rate. I emailed my problem and he was able to identify my monolithic chip and find an exact model that was disassembled. He impressed me beyond. I thought he did something the other guys didn't. He knew exactly what he was doing. The quote was reasonable. So I slept on it, night after night and my gut told me countless times this was the guy. So I sent my chip way north, and I waited. The wait was overwhelming day after day. Finally I got an email that said my chip was fully recovered. I hesitantly paid the quote which was quite reasonable than what I got. The guy sent me a link to download my work, and within a few days he sent me my original monolithic flash drive and a new flash drive with my complete work on it.
Whew. What a long wait of agony. God was directing me and said yes, get this literary baby published. Now I have printed copy of my fully recovered work and peace of mind. My experience to this, back up your work, such as your phone, your external hard drive and flash drive etc. Be aware of people out there waiting to gouge unsuspecting customers lots of money. Monolithic chips are the newest thing, but keep to the regular flashdrives for future reference. In a devastating case scenario, it turned out good.

Some have you knew of this, but since last May 2019 all is well.   So far the Chromebook is wonderful with my work saved on the Cloud which is on multiple devices now.  I still use my main laptop for multiple files since it has more room. It does guzzle up the battery faster than the chrome, which lasts about nine hours for battery life.  Even if I move my story around, it is on the desktop and a simple new flash drive, if need be. 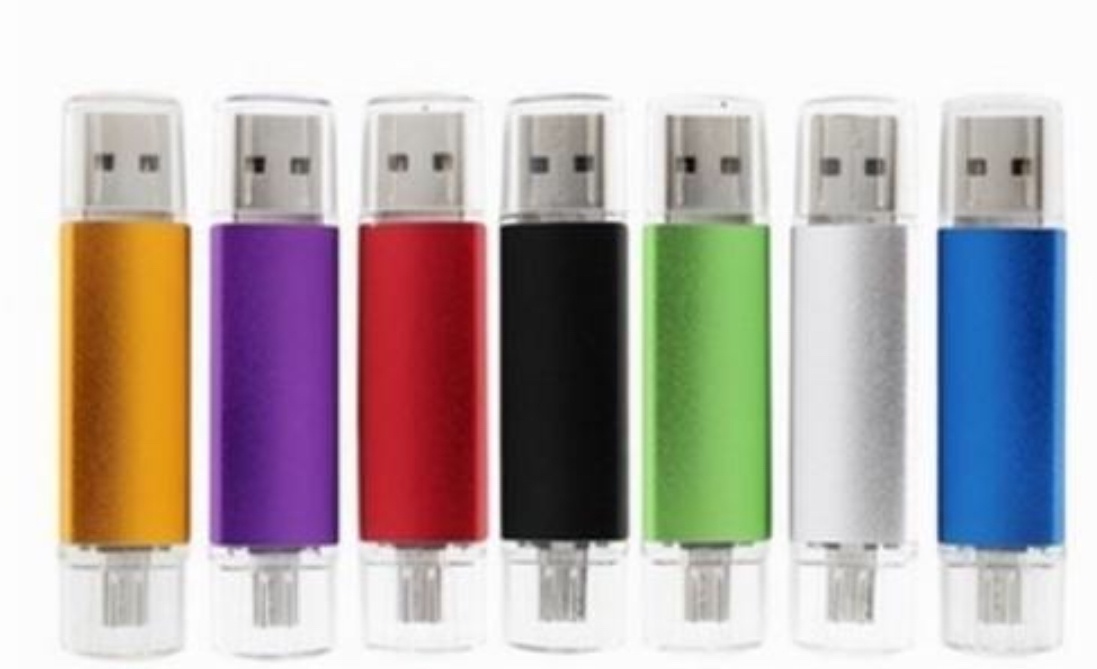