Everyone needs a restart, whether it be creating a manuscript or artwork.  Carry a journal or sketchbook in  your pocket or purse.  It's a freedom to get out the static by reorganizing the mind.  Since many are homebound it becomes a bit more of a challenge keeping up with our mental health.. Our social media platforms for our socialization has become the strange norm of keeping up with friends and family.  I still use the phone to a friend or family and let them know you are thinking about them.  Covid has affected us in so many ways with a rippling effect that hasn't stopped.

Journaling has always been a way of self discovery and pulling out more details of a story, a particular character for me and gets the creative mind in gear.  Nevermind the grammar, it's just you and the spiral bound notebook and a pen.  Write out first thing in the morning with a quiet place for five or ten minutes.  Try to get three pages down.   Write out your concerns, events of yesterday or whatever suits your venture in journaling.

Or try a photo, any photo and describe it. A photo is worth lots of words.  Freewriting is what it is, put anything in there. If writing is not your thing, try the sketch pad and dub it morning sketches.

Posted by Laura J at 7:32 AM No comments:
Email ThisBlogThis!Share to TwitterShare to FacebookShare to Pinterest

Ready for the Night

Well it's been a long two weeks.  Had a sinus headache, the kind that hurt to think.  Alas God told me it's time to take a break and come back to make the story stronger. I am reminded to add a 12 year old character into the story, and he needed  his own character sketch. The book is going to be interesting since he is going to help change the course near the end. "When the cat's away, the mice will play"goes the saying.  Meanwhile the main character is crossing an icy bogland alone.

I might be coping the best I can with the pandemic and being cooped up for a year at home with the kids. Homeschool is good, the kids are doing great

What are you working on tonight?  Writing or art project?   Have a coffee with us in our corner, or step it up with wine or add Kahlua.  Let's see what happens when trying to be productive.  Got my outline and music, always have to have music to keep the mind going. During an action scene, definitely a soundrack to a good movie.

Like my new inspiration?  Can't help to think spring with the roses.  A bonsai tree, but when we move soon.    Stay awhile...

Posted by Laura J at 2:40 PM No comments:
Email ThisBlogThis!Share to TwitterShare to FacebookShare to Pinterest 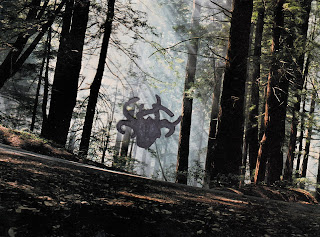 Pasting an image--especially one that looks out of place--into a scene is a quick way to create whatever mood you're aiming for. This is obviously for comics. If you plan to use such an image in a published work, make sure the background is non-copyright art. This one served as a model for one of my comic panels. You don't need this much detail in the forest, since you want the main figure to stand out. 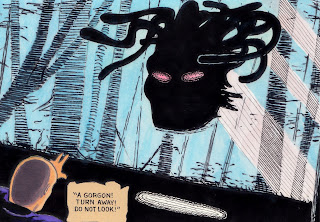 Posted by Nick Nuko at 7:41 AM No comments:
Email ThisBlogThis!Share to TwitterShare to FacebookShare to Pinterest

Manawyddan the Son of Llyr — tale 3 Summary and Criticism

In London Manawyddan regrets that his cousin Caswallawn now rules the Welsh region Bendigeid, his brother, had. Pryderi, who is with him, agrees he should marry Rhiannon. This occurs when they return to Wales. Pryderi is married to Kieva. After Pryderi visits Caswallawn and returns there is a violent storm and mist; and when the mist clears there is nothing around, neither man nor domesticated animal nor building, save for the empty houses of the Court. After consuming the available provision, they hunted; but in the second year they became bored. The took up first, saddle making, then shield making, then shoe making; but in each profession their work was so excellent that the local craftsmen were unable to sell their product, and schemed to murder the two and their wives. Each time they moved on to another town, and took up the next profession.

Afterward they returned to their home, and one day the two men out hunting came upon a  castle, in which their dogs ran in chasing a boar. Pryderi went in to look for the dogs and did not come back out. Later in the day Manawyddan retuned to his palace without Pryderi, which greatly upset Rhiannon. She went to the castle, and like Prydri touched a bowl at a fountain and became frozen there. Then, the castle vanished. Manawyddan takes up shoe-making until there is a plot to kill him; and he returns to Narberth, where he planted three fields of wheat. One day he was going to harvest the wheat of one filed, but the night before someone went off with the wheat. This happened with the second field, too. The next night he waited in the field, and saw a hoard of mice eat the wheat. He caught one, and in daylight he was going to execute it for theft. A scholar came up to him, and found the deed below him. He would pay a small amount to let the mouse go. This was refused. Then came a priest who offer more; but this was rejected. Finally, a bishop came, and offered more and more, finally saying that the mouse was his wife. The bishop had placed a charm on the area, including the castle, because of Pryderi’s inflicting pain on Gwawl, who once had wanted to marry Rhiannon. Manawyddan kept refusing until he had the promise that Pryderi and Rhiannon would be freed, and there would be no further revenge on them. The two and the rest of the people reappeared, and the bishop turned the mouse back into a woman.

This follows the first tale of Pwyll and Rhiannon. There is a certain likeness too in the mood, that is, charming. Manawyddan, however, appears introduced into the third tale by someone who wanted to unite the tales. Manawyddan is from the Ordovices of northern Wales, Pryderi from the Silures, a tribe of the south. Narberth is in the south, which is not Manawyddan’s residence in tale 2.