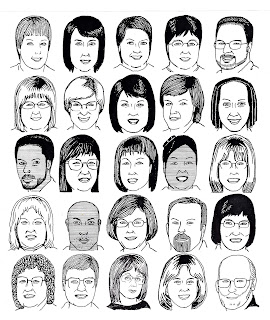 This idea makes a good group presentation. In this case, it's the entire lab staff of a hospital, whose name appeared at the top in blue. To  make one for your group, you'll need photos of each. Art sketches work best, but you can use actual pics if no artist is handy. I had to make shirts for each member in various sizes. It's important to go a size large, since fabric is going to shrink.

Wanna make a surprise present for the gang? Better sneak those photos and get them to a shirt printer before Santa arrives.

Posted by Nick Nuko at 8:29 AM No comments:
Email ThisBlogThis!Share to TwitterShare to FacebookShare to Pinterest

The Case for Shadow Trigonometry 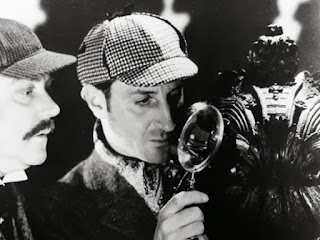 Holmes examined the photo given him by the murder suspect, one James Ackerby. It showed him with an arm about an unidentified woman. Behind them, five concrete steps led up to a veranda in late afternoon sun. The house had recently burned, along with its owner, the late Mr Bozwell. Scotland Yard suspected foul play, as Ackerby and Bozwell had been romantic rivals.

"As you can see," Ackerby insisted, "this has me in the company of a different lady, not the one Bozwell was enamored of."

"Quite," Holmes mused, magnifier in hand. "You stated that Bozwell was trying to enter the house when he collapsed. His head lay against the door. Tell me--did his feet reach the end of the porch?"

"Not at all; they were some inches short."

Holmes slipped the magnifier in a pocket. "You went for help, but in your absence the house caught fire."

"Ghastly business, that. Did the police find a cause of death?"

"I shall defer to the examiner," Holmes said. "Dr Watson?"

I could only shake my head. "The corpse was entirely consumed. I can only rule out blunt trauma to the bones, but I cannot rule out poison. His height was five feet eleven."

"Then that should satisfy," Ackerby concluded. "Perhaps this will get Scotland Yard off my neck." He recovered his hat and went out.

From the back rooms came Inspector Lestrade and Mr Robbins from the Royal College of Engineers.

"Well, Holmes," Lestrade blustered, "do you still intend to solve this crime using a photograph?"

"With Mr Robbins' help, Inspector. From what I see, the pieces have but to be assembled."

"With a key piece of data," Robbins reminded.

"Of course. As told by convenient markings on my door frame, Ackerby stands five feet eight."

"Splendid!" Robbins rushed to a windowside table and opened a field kit. From this he produced a rule, protractor, slide rule, and a table of trigonometry values.

"Ah yes, Inspector. We shall endeavor to know the width of the porch."

Lestrade looked over the engineer's shoulder. "Harumpf! You've only this edge-on view of it."

"That's a helpful circumstance," Robbins countered. "We can use it as the horizon, from which we base the relevant measurement." He set rule to the photo. "Note the shadow cast by the overhang, which we infer to be equal to the porch in width. It makes a twenty-eight degree angle with the top of this balustrade. Since we know Ackerby is five-eight, we draw a line from the top of his head to the base of the balustrade. Note where this line intersects the balustrade's shadow: just below its narrow waist."

"A simple ratio," Robbins went on, "gives us the five-eight mark on the balustrade. Another ratio tells us the remaining length, which is the vertical leg of our triangle." He consulted his math tables. "The tangent of the sun's angle equals the opposite side--just obtained--divided by the adjacent, which is the overhang width." He sketched a rudimentary algebra result.

"Blimey!" Lestrade gaped at it. "The porch is five feet four inches!"

"Quite so," Holmes said. "The victim's feet would overhang by seven inches, most contrary to what Ackerby claimed."

"Engineer," Lestrade ordered, "pack up your findings and come with me."

When they'd gone, I prepared the usual observation, but Holmes was quicker to the point.

"Indeed , Watson. Someone is about to have his day ruined."