Dabbling in my Journal

Good afternoon! Glad to see you drop by and tell us what you are working on. Or maybe you are just taking it easy. Is your mind as actively creative that won't shut off even when you are relaxing? Even when I take it easy, my mind wanders and dwells on the current project in progress. I even dreamt of a scene last night of the character, a sorcerer causing all the mayhem.

Sitting on the porch under the shade of the red umbrella and the oak tree is nice on a spring day. 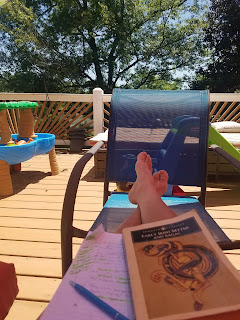 Let us know what inspires you.  Listening to nature feeds the soul.  For this process, I prefer the handwritten in pencil method.  It's not so permanent on the screen yet. 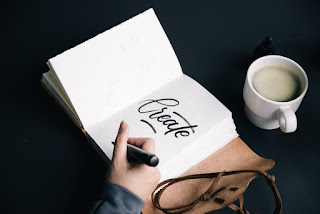 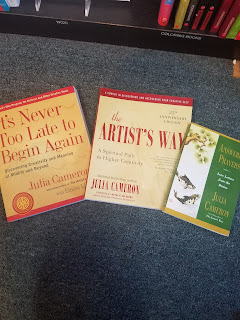 Hope to get through some scenes today,
one that creates the pivotal moment of the story my character is going to endure. Going to take a bit of research as well. Make the story credible, lure the reader in.
Posted by Laura J at 11:35 AM No comments:
Email ThisBlogThis!Share to TwitterShare to FacebookShare to Pinterest

A Niche Kind of Place

Happy Friday!   It's been a horrendous week.  Too much to do and little time for writing or anything creative.  What is your system on gearing up to write or cerate a work of art?  Maybe it's sketching or freehand.  I like a variety and it all depends. I write much more than working on art projects but easily switch hats as it comes. Try out some natural sounds with music. Dan Gibson is superb if you have not heard his music.  I recall many Sunday nights when Hearts of Space would come on.   Just great to listen to or write or create to.

Do you dabble in writing, journaling, creative writing, editing or any field of the arts? From painting, photography, drawing to graphic arts. My BA degree is in graphic communications. What programs do you use? This is the place to join to inspire and share expertise on a project, a technique that works for you that one may struggling with.  Perhaps you are an aspiring writer or artist.  Maybe you want to sell your artwork and need advice how to do so.   Feel free to join us as creative minds work together.   This place is for anyone who loves art and writing.

If this is your first visit with us, enjoy and look around. There are many stories to look at and we have a great bunch of good people happy in their creative worlds.

Take a nice diversion from your usual routine and try something new.

Posted by Laura J at 9:34 AM No comments:
Email ThisBlogThis!Share to TwitterShare to FacebookShare to Pinterest

The Long Road Back

From the journal of Arcanus

I entered Eolca under a spell of illusion. It wouldn't do to be caught here. I was the empire's greatest enemy. Never had I envisioned strolling the Via Circuita with its stunning view down the terraced extinct volcano, not without compelling reason.

That reason was curiosity. The invitation came from none other than Wayacth, the empire's greatest sorceress. I had clashed with her before over the desert skies of Guyeveh. Her fellow Red Claws hit hard and fast, much to our detriment. This could be a clever trap--save for that legendary Red Claw honor. If she assured my safety, it would be so.

I ascended the busy steps up Mount Nuerca. The heights were dominated by lavish villas, which clung to the mountain beneath the lofty fortress of the Sybils. Once admitted through the gate by an elderly maid, I dropped the illusion, much to her horror. "Announce me to your mistress. I am the archmage Arcanus."

The scurrying maid cast back fearful glances, bringing us into a cool foyer lined with antique weapons. Presently Wayacth entered from a side chamber, hair regally piled, dressed in gauzy lavender. She led us to a study with a glorious view of the Pedale Sea. We faced each other on matching white divans.

"Of course: the sixth tier, highest in the empire."

Shocked, I awaited the story as the maid brought in a platter of rose custard and baso wine, that bitter test of Red Claw stoicism.

Wayacth was the victim of a high-level sleep spell in the senate. On awakening, she felt something was wrong, a fear borne out by failure to conjure a simple mage light. She paused, testing me.

"Your magic link was severed," I said. Practitioners of the psionic arts are capable of it, and are frequently employed by the anti-magic Inquest fanatics."

"I have restored it," she said bluntly.

I clutched my staff. "Impossible. Unheard of!"

"It happened thusly: I have my grandfather's ability to sense magic links in academy candidates. Unlike him, I can visualize links--even my own."

"Astonishing!" I must learn the secret of this. It would be my price for whatever she wanted of me.

She went on. "I ordered my maid Sapillia to turn away all visitors, and see that I was not disturbed during the long night. Partly in the dream state, I repaired the link with agonizing slowness."

"Whom do you suspect of the crime?"

Again I reeled in surprise. "The imperatrix?"

"I believe her responsible for her husband's death. She now fears the Red Claws, and has ordered our base here relocated to Daumastia."

The imperator's dragon flight had been ambushed over the frozen Yaglukk region by dark realms raiders.

"I must re-learn all my spells, and in record time. I need someone to spar with, one who will truly challenge me."

"You speak truly about the punishing challenge, girl. And if you regain your tier six?"

"Then I will settle with Yisrilla." She gave me a moment to digest this. "You have no more liking for her than I. Her reckless courting of the dark realms endangers both our eastern borders."

I laughed, releasing the pent up backlog of surprises. "I know you for a determined woman, Wayacth. You have already achieved the impossible. We will begin your comeback at Khot, City of Thieves, as neutral ground."

She grimaced: an aristocrat in such a slag pile?

"Agreed, Arcanus. But don't expect me to call you 'master'."

Posted by Nick Nuko at 7:42 PM No comments:
Email ThisBlogThis!Share to TwitterShare to FacebookShare to Pinterest

The Creative Way and God

Keeping on the creative wave lengths.  Being creative is also a spiritual as well personal development.  Sometimes we have a creativity block or our personal censor tells us we are not good or our work is meaningless.  Julia explains ways to override that negative censor.    Trying out morning pages or freewriting in the journal helps tremendously.  How this works is write whatever comes to mind.

For those with kids and busy routine, find the time in the morning, at least five minutes to write in the morning.  Try it for a week and it will help you break through that creativity block and put aside that censor. It will make your profession better and have a better inner spirituality. Her works have helped me write and create better works of art and have inner peace within. My gift to everyone when my books are published is to be a gift, an escape from the hectic world we are in.

Posted by Laura J at 7:21 AM No comments:
Email ThisBlogThis!Share to TwitterShare to FacebookShare to Pinterest
Newer Posts Older Posts Home
Subscribe to: Posts (Atom)