Paean to the Muse 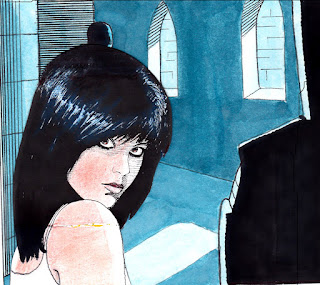 I should be terrified. Eric's fatalistic mood overrode sensible fear. What he sought couldn't wait; he must see Cambris even as she arose from the crypt.

Pebbles skittered down the incline, kicked up by the nervous pirate guide who called himself Sulla. His shaky torch cast manic shadows on the archway. Bearing arcane runes on its lintel, it grew out of the rock like a Star Trek transporter accident.

"This is as far as I go," Sulla growled. "They're in there, right enough." He brandished a sword given by Count Rotbone as a sigil of safe passage. It didn't give him much confidence.
Eric peered into the gloom. Small grates high above admitted dusty light, helping the night roamers guage the lateness of evening. "That wasn't the agreement. The Brides know me, but some early riser might not. Now get in here."
Grumbling, Sulla followed Eric onto a lumpy, rolling plane. Massive foundation tiers stood wreathed in mist, not all of it natural. A segment formed itself into the first of the huntresses. She glided toward them, eyes squinted against the punishing remnants of daylight. She did indeed recognize Eric, and shrank away with a fangy snarl of loss. Now her eyes fixed on Sulla.
Eric kept sight of the girl while addressing the pirate. "We're okay. Just another minute or so."
"Bugger off, matey!" Sulla dashed for safety, slicing at invisible threats.
From deeper darkness appeared the Brides, only one in original white, being first in the hierarchy. They surrounded a barely breathing Eric. The one in black stretched out filigreed arms, causing him to flinch until he remembered.
"Emmy. . . .always good to see you." He accepted the embrace, which he had taught her back on Earth during a supreme leap of faith. It all began with inheriting the family secret. Though Emmy was without speech, he'd gained her trust before setting her free. She'd promptly embarked on a quest to reunite with the other three, culminating in locating a portal to Outworld. Now all four had a permanent home.
Flax-haired Yelena spoke no English, nor did Mirjana with her touch of the Orient. Both watched the tick of his neck pulse. He'd probably never feel quite safe around them.
"Hail, young Eric," Cambris said. "What grave import drives you to our very lair?"
"I'm relocating here for good, before they break my door down and force me to join the masses going over a cliff."
"I know of what you speak; yet what place shall you find here?"
The million dollar question. Eric could stay in Team Dan's shadow, profiting like they did with his exotic Earth mystique. He'd never be a super hero, but he'd waste away without some kind of purpose.
"Perhaps with us," Cambris said, smiling at his alarm. "Not as one of us. Recall how you painted our likeness." The portraits flanked that of Count Rotbone, painted centuries earlier.
"Portrait painters are a dime a hundred. Besides, I'd feel like a glorified camera."
"Then you shall paint the fantastical, with me as your muse. Attend." She set a brisk pace, gown flowing, ever upward into forsaken reaches of the castle.
A secret wall  panel opened into an old wizard tower. Charts and scrolls occupied cubbyholes above a cauldron. A wood and straw cot had moldy blankets folded beside it.
"Yon subject," Cambris said from the open window. When Eric joined her, she gazed out at vast expanses of haunted forest. "See how Luna sails silver in tattered cloud, come once again into my dream this night. Through dusted pane aslant the wall, glint on taloned wing, hooks overflow the endless sky."
"You really paint the mood." Eric sat at the worktable, which was piled with notes and cryptic tools. "A wizard's tower. I'm seeing it blue by night; moldering by day in blurred orange and gold, flies droning in and out. Timeless and forgotten." 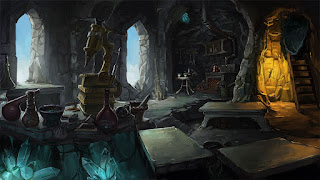 "Then plan on passing the nights here, as we cannot protect you when the day star holds sway."
"It's perfect! I'll be a painter of the macabre. And I'll put your paean to Rotbone Island on the back."
"Rotbone? He is a drunken fool."
Eric ventured to the window as cloud overtook the moon, bringing preternatural light to Cambris' eyes. "Then I'll attribute the poetry to you. You'll be immortal! I mean. . . ." 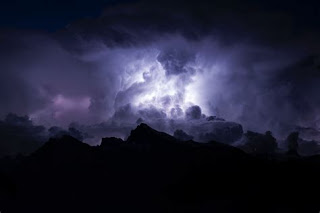 Cambris laughed, fangs gleaming with the returned moon. "You must be close to your muse, young Eric. I shall arrange it. No more are you the poor cousin from the home world."
Join Rotbone's crew? He'd be his own man overnight, notorious, minus trouble with the law. An image assailed him: a costumed dandy, pet of the Brides.
"You have doubts. We shall visit the news upon Team Dan."
She knew exactly where to thrust. Eric made a mock toast. "To the painter of the weird and his undead muse."