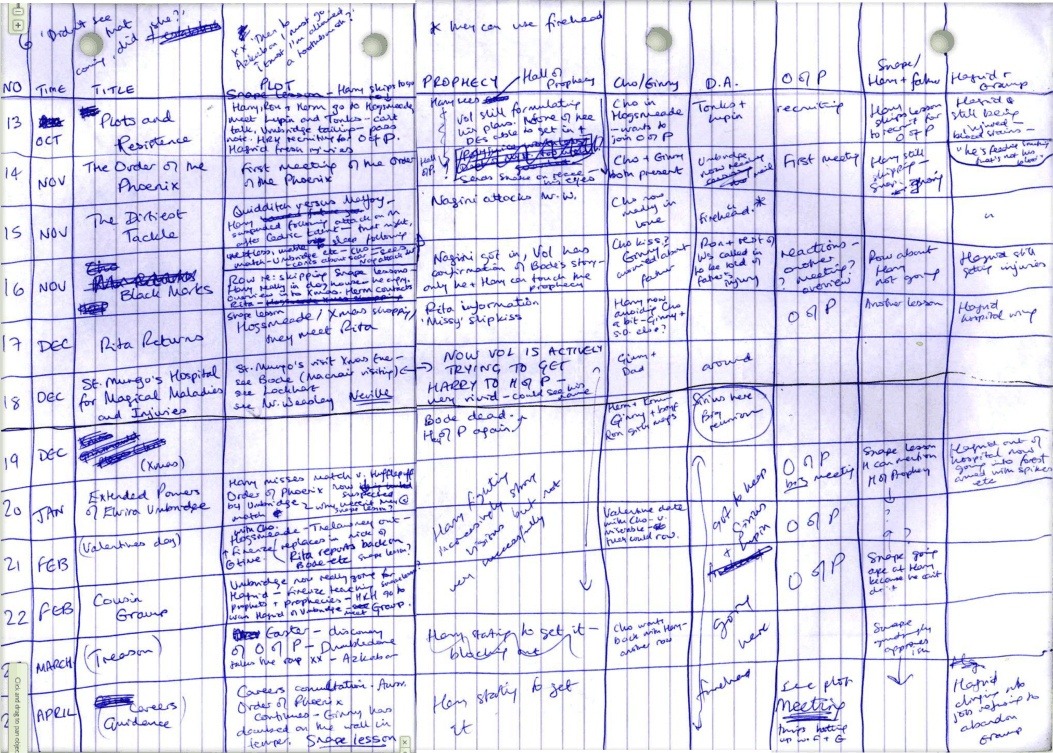 At the height of the Harry Potter novels' popularity, I asked a number of people why those books in particular enjoyed such a devoted readership. Everyone gave almost the same answer: that author J.K. Rowling "tells a good story." The response at once clarified everything and nothing; of course a "good story" can draw a large, enthusiastic (and, at that time, impatient) readership, but what does it take to actually tell a good story? People have probably made more money attempting, questionably, to pin down, define, and teach the best practices of storytelling, but at the top of this post, we have a revealing scrap of Rowling's own process. And I do, almost literally, mean a scrap: this piece of lined paper contains part of the handwritten plot spreadsheet she used to write the fifth Harry Potter novel, Harry Potter and the Order of the Phoenix.
This particular page (click to view it in a larger format) covers chapters 13 through 24, during which even more happens than you may now remember. It may have amounted to more than Rowling, too, could remember, hence the spreadsheet itself. Endpaper explains some of her story notes as follows:
"If you think about Harry Potter and the Order of the Phoenix, that’s it," writes /Film's Germain Lussier. "Those columns pretty much encompass the whole story." Rowling, of course, hardly counts as the only novelist to write with such techniques, and based on this example, hers don't get nearly as elaborate as some. (I recall once reading that Vikram Chandra had to bust out Microsoft Project to keep track of the complications of Sacred Games, his 900-page novel about the Mumbai underworld.) But Rowling must certainly rank as the most famous novelist to, quite literally, draw up spreadsheets like this. I suppose it does leave her books even more exposed to accusations of overplotting than before, but something tells me it won't bother her.
Related Content:
Download Two Harry Potter Audio Books for Free (and Get the Rest of the Series for Cheap)
Take Free Online Courses at Hogwarts: Charms, Potions, Defense Against the Dark Arts & More
The Quantum Physics of Harry Potter, Broken Down By a Physicist and a Magician
Celebrate Harry Potter’s Birthday with Song. Daniel Radcliffe Sings Tom Lehrer’s Tune, The Elements.
Harry Potter Prequel Now Online
Colin Marshall hosts and produces Notebook on Cities and Culture and writes essays on cities, language, Asia, and men’s style. He’s at work on a book about Los Angeles, A Los Angeles Primer. Follow him on Twitter at @colinmarshall or on Facebook.
http://www.openculture.com/2014/07/j-k-rowling-plotted-harry-potter-with-a-hand-drawn-spreadsheet.html
Posted by Laura J at 5:33 PM No comments:
Email ThisBlogThis!Share to TwitterShare to FacebookShare to Pinterest

Character Description in The Glass Menagerie

The Glass Menagerie by Tennessee Williams.

This is a follow-up to the earlier post on authors' description of their characters. Included here is Williams' technique and criticism of the theatre. A second part might include a brief discussion of where this play fits in with others, and another topic or two.

In a play there are generally two ways characters are described: what a character says of self, and what characters say of each other. This is purely method. A third way, possibly used at the first showing of Williams's play, is the program brochure that identifies characters and players. The printed version of Williams's play has the names of the characters and a description of them; and this information might have come from a brochure. For example, one character, Amanda, is described, here shortened, as "A little woman of great but confused vitality clinging frantically to another time and place". A fourth device in The Glass Menagerie is a character who relates what occurs onstage, including remarks on other characters. This is Tom; and the first name of Tennessee Williams, who wrote an imaginary version of his early life.

In the production notes, Williams writes: "Expressionism and all other unconventional techniques in drama have only one valid aim, and that is a closer approach to truth. When a play employs unconventional techniques, it is not, or certainly shouldn't be, trying to escape its responsibility of dealing with reality, or interpreting experience, but is actually or should be attempting to find a closer approach to more penetrating vivid expression of things as they are."

He goes on to say that the straight realistic play "has the same virtue of a photographic likeness", which he finds unimportant. He states that the "plastic theatre...must take the place of the exhausted theatre of realistic conventions if the theatre is to resume vitality as part of out culture". He employed illuminated images, music, lighting to enhance his work.

The essay, "The Catastrophe of Success", looking back to the period of The Glass Menagerie, is interesting reading: https://genius.com/Tennessee-williams-the-catastrophe-of-success-annotated

It concludes:
“In the time of your life—live!” That time is short and it doesn’t return again. It is slipping away while I write this and while you read it, and the monosyllable of the clock is Loss, loss, loss, unless you devote your heart to its opposition.
Posted by eolone at 9:33 AM No comments:
Email ThisBlogThis!Share to TwitterShare to FacebookShare to Pinterest

Nineteen year old Eric took pride in the four portraits he'd painted. Dracula brides graced either side of Count Rotbone's bug-eyed Nosferatu visage. The vampire lord didn't have a lot to say about all these women invading his turf, though it did add a badly needed touch of class. No more skulls or tin cans littered the great-room floor.

Eric approached the table and its high-back chairs, leery of distant hollow clanks and moans despite his privileged status. The brides counted themselves much in his debt; if not for him, they'd still be haunting a ruined fortress near the Caucasus. Yet his purpose here might use up that largesse. It all depended on Cambris.

She swept downstairs, white gown and Cleopatra bangs undulant to some phantom current, gliding in that spectral way of theirs. Cambris: first and eldest, bossy and aristocratic, maybe her due as former wife of the village alderman. And also Dracula's biggest mistake. Patient centuries passed in her oblique undermining of the count, culminating in setting him up for vampire hunter von Halter.

They took adjacent seats at her bidding. Eric knew she sensed his pulsing blood, hoped she attributed it to youth rather than his shady agenda. Could you even plagiarize the undead? He merely wanted her character to sound authentic. That was the excuse, anyway.

Those yellow grackle eyes bored into his. "Your quest precedes you, Eric of Newcastle."

Heart attack time. "You mean my book idea? Well. . . .I thought I'd start out with your story, Miss Cambris." To be precise, your lyrical and fluid speech, to help make my mark with a story series on social media.

"I?" Imperious brow arch. "Have you such clerkliness of pen?"

Eric wrote that down. Clerkliness. Good, good. "To be honest, I'm no writer." Why did he say that? If she was magicking him. . . ."I mean, the other three brides can help me flesh out the centuries post-Dracula." Really? Emmy lacked speech, and neither Yelena nor Mirjana spoke English. "What I mean to say is, maybe not--you'd only have to translate for them." Which wasn't what he wanted at all.

Cambris went heavy-lidded with. . . .suspicion? Or perhaps her own saga was too personal to bear. "Set quill rather to your unmirrored and crated inheritance."

Unmirrored. He'd definitely use that. Wait a minute--a crate containing the family secret, passed on to him by his Granddad, whose occupant cast no reflection. "You mean Emmy?"

Eric had thought the girl in the box a cheesy trick, regardless of the mirror thing. But the setting sun made him a believer in the hissing, spitting wildcat. Still, Eric refused to follow Gramps' lion-tamer act, and spent several  nights--shakily assured she couldn't harm him--learning to communicate. Then he'd done the unthinkable, and set her free after four hundred years in the Harker clan. That led to her search for the other three with Eric's help. Now they lived (?) a privileged existence safe from an Earth that had outgrown them.

"That's a good idea," Eric allowed. As long as it kept her talking. "Even better if we knew some of Emmy's early history, like when Dracula shipped her out when he discovered she couldn't speak. I wonder if Count Rotbone would have done the same." That ought to do it.

Her pupils shrank to pinpoints. Damn scary. "The pangborn wastrel who was Dracula had not Rotbone's dullard jollity, else he must of needs grant Emmy harborage. Her sagacity e'er has him unawares." She watched Eric furiously scribbling. "Why do you scribe my words?"

His scalp tingled under her Mistral gaze. Would she bespell him, even beholden as she was? Best not to risk it. "I'll play straight with you, Miss Cambris. I could listen to you talk all day. I mean night. If I could write like that, I'd be in the big leagues."

If only vampires blinked. Her stare was unreadable. "Such prosody does not bear the telling overmuch. I would even tire of myself."

Prosody. Was that even a word? She did like to make up stuff. "Is that in the dictionary?"

"It refers vaguely to metrics, though I have decided it lies between writery and poetry."

Now she was making stuff up. Writery indeed. "Then you aren't mad that I came here under a pretense?"

The amused half smile bared fang tips. "Curious. I had thought you instead enraptured of Emmy."

Regal laughter echoed. "You are safe from my sunless designs, young Eric. Bring to me your Cambris rendition, and I will cause her to speak my words."

Eric steadily backed to the exit. "Perfect! My own ghost writer! Not that I'm calling you a--" He collided with the door frame, hastily adjusted course, clutched the precious notes. Maybe they'd be enough. 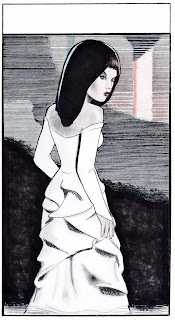