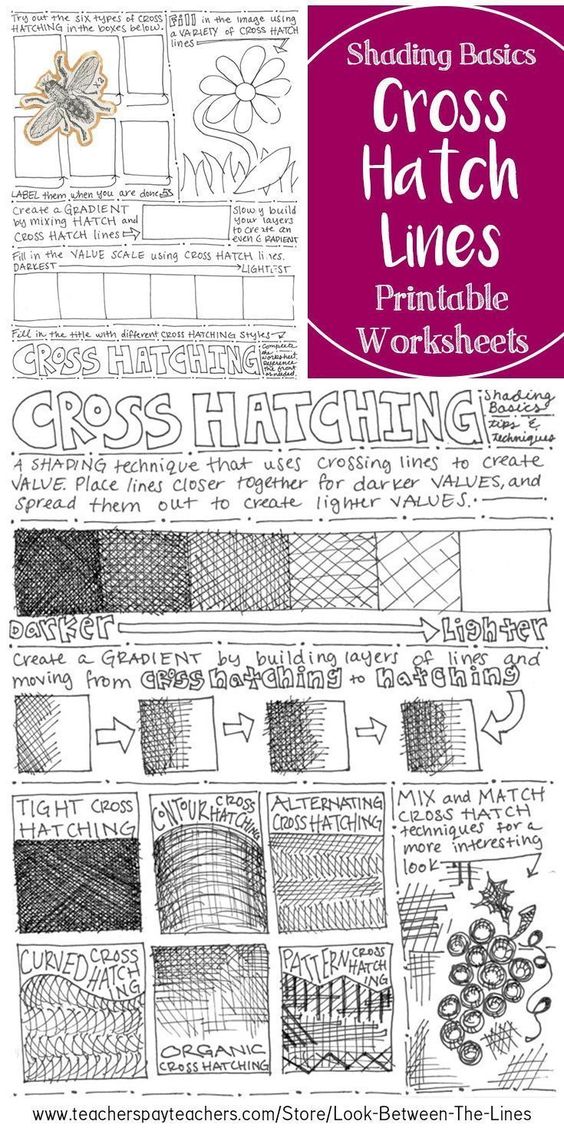 https://www.pinterest.com/pin/49398927150650673/
Some of us are self taught artists while many of us want to fine tune our skills to create a more professional piece of artwork.  Some artists take a while to get back at it when they have had a period of producing little art.  Some skills are rusty getting back into it.  One of the various ways that seem to be most difficult is the technique of shading with graphite.   While in my many first drawing courses, instructors would lend advice of what worked for them. For example, one process is to try out various pencils of various shades for the effects of your piece.  Perhaps it is mechanical pencils.  Somehow I prefer the mechanical pencils but the leads go up to 4B as I have recently searched on Amazon.com.
I tend to go back and forth a bit.  I prefer a toothy to smooth drawing paper such as bristol or other kind of bond paper.  As a frugal artist just looking for angles in my sketches, I just use regular computer paper then tracing paper to make the points of sketches to perspectives of my subject.

In shading with graphite, it comes down to the direction of light and shade on an object.  I got to experiment with various still lifes to gain more practice and paying attention that each object on the display were just shapes and fabrics and how light fell on them from a window on a sunny day.

To draw shiny objects, lots of practice on metal objects such as wrenches, tools, and I do have letter opener swords as well.  It's kinda like making up a story with your still life as you display it how you want.

As I gravitated from my books to the illustration process, a bit rusty but nothing I can't handle by brushing up skills.  One of the challenges of illustrations in graphite is snow on a mountain slope.  Not deep powdery stuff but a light snow with patches of grass.

Thinking back on my insttructors tips, if you can draw and shade well in graphite your paintings will be even better.   Keep in mind of the elements of art.  Line, shape, color, form, value, texture, space. I also want to add unity.  Art has unity as in nature.

How has your journey as an artist been similar or different? 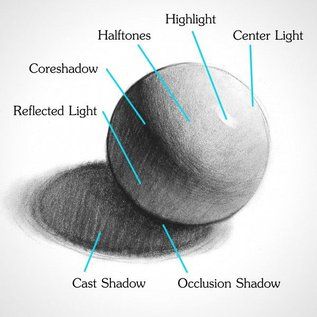 Posted by Laura J at 12:28 PM No comments:
Email ThisBlogThis!Share to TwitterShare to FacebookShare to Pinterest 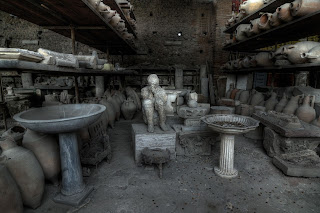 For Artemus Jaxson, the close of visiting hours meant his job had just begun. This latest excavation at Pompeii had caught his notice in a journal of history, leading him all the way from England to hide behind stacks of amphorae. Whatever the horizontal urns had once held was long gone, as was a reputed magician called Oreander who dug this basement. But there was a third sub-level Oreander wrote about in his cryptic notes. A scholar like Artemus was able to worm out the details of period Latin, right down to local idioms and current events of the day.

Hearing the gate shut above in the atrium, Artemus crept out of hiding and headed for a boxy stone, on which a corpse sat pensively considering the disaster which had befallen him. When this chamber was cleared of ash, excavators scanned for signs of body-shaped voids. This they carefully worked around, leaving intact a realistic shell complete with melted facial features.

Artemus played his light over the mud mummy. "Sorry, old boy, but I must disturb your master's repose." He set about searching the base for a hidden panel. There he found the lever for an ingenious counterweight, and the gruesome sculpture grated aside to reveal a round hole. Dank cold air rushed out, along with (perhaps imagined) a sepulchral sigh.

Spiral metal stairs reached down to a secret well. Dripping water echoed along a stagnant concourse barely ankle deep; the pending eruption of Vesuvius had dried up the city's water supplies. Artemus tucked his nose into his shirt against the cloying swamp odor, sweeping his light in both directions. Stygian voids presented at either end, but the niche he sought emerged from the gloom.

Carved from rocky soil, the arched chamber featured recessed shelves stocked with rotting tomes, braziers, and a desk. A figure had hands on it as if in the act of rising.

"Quintullus Oreander," Artemus said. "I've come to see what you have bequeathed the world." He tried not to look at the specter, whose toga hung in tatters from parchment flesh. Upon the desk lay an open scroll. Artemus blew away the dust, recognized the writing as an incantation. As he spoke the words, reality shifted.

He was looking down a forum littered with bodies and overturned carts, looming from a nightmare world of black snow. Animals brayed, dogs barked, people shrieked in despair. North, past the old ruins of the temple of Jupiter, there appeared the author of this apocalypse. Vesuvius sent tongues of flame into a black sky that danced with sheet lightning, the roaring thermal vents giving notice of the pyroclastic flow that would soon end all life.

No one paid heed to the oddly-dressed man who staggered under a hail of pebbles and pumice, who crawled toward the dubious shelter of the cloth maker's guild. Artemus had to laugh at the trick played upon him.

Authorities were perplexed by the man in rich period costume who emerged from the House of Oreander. He only spoke Latin, leading them to suspect he was a deranged history buff. Yet the man wasn't at all bothered at being detained, exhibiting a childlike wonder at everything around him. One of the guards joked about the guy having been asleep for two thousand years.

Posted by Nick Nuko at 8:13 AM No comments:
Email ThisBlogThis!Share to TwitterShare to FacebookShare to Pinterest 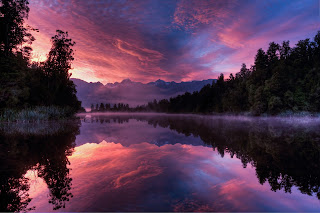 Never a man to share the spotlight, Horst backed a tanker truck to a remote tributary of the Rhine. He feared neither his quarry nor the need to hunt at night. His reputation as a myth buster swelled his confidence to the level of bravado. He'd lost count of how many mythical creatures and local legends turned out to be freaks of nature or hoaxes.

Horst used a red light, since red didn't carry far in the dark. He waded through rushes, the sloshing covered by razoring bugs and croaking frogs. With the trap set, he quickly covered the water truck with foliage, ready to receive its denizen of the deep. He scanned the waters with night-vision binoculars.

Mixed opinions assailed him as he breathed the night air. The mermaid lore of this backwater village based itself on something. No manatees could survive here, leading him to suspect a hoax. Tonight, some woman in a mermaid suit was due a reckoning.

Horst gave the child mannikin another tug. He counted on the quarry's maternal instincts when it came to children lost in the dark. The ploy bore fruit faster than he'd hoped; a head broke the surface, leaving a smooth wake as it approached. Whoever it was didn't use arm strokes, but rather flippers or some kind of suit.

Now it rose to waist height, an astonishing semblance of the real thing. Was it possible? Greenish scales gradually faded to pale flesh at the sternum. Dark hair sported garlands of aquatic growth. By the time the net enveloped her, Horst knew he'd made the catch of the ages. He dragged the struggling bundle close to the bank.

A hand shot out to grip his throat. A force compelled him to cut her loose. The fangs and burning eyes seemed out of place.

"No," Horst gurgled. "You can't mix archetypes like this. It isn't fair!"

"Neither is it fair," said the merpire, "what was done to me centuries ago."

Posted by Nick Nuko at 8:26 AM No comments:
Email ThisBlogThis!Share to TwitterShare to FacebookShare to Pinterest 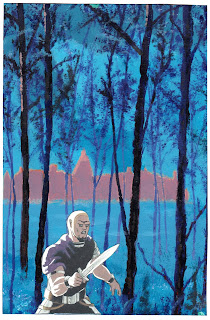 This is a composite, where the foreground figure was temporarily pasted in from a comic book scene. Originally, he faced off with the Lady of the Lake, and it didn't end well; she set a banshee on him. The background depicts an imagined view of the haunted manor of Collinwood as seen from the equally  haunted woods. It could also be a nice safe town, where folks are wise to stay indoors when the sun goes down. Acrylic, 7x10.
Posted by Nick Nuko at 3:31 PM No comments:
Email ThisBlogThis!Share to TwitterShare to FacebookShare to Pinterest
Newer Posts Older Posts Home
Subscribe to: Posts (Atom)