28 June 1577 – 30 May 1640) was a Flemish artist. He is considered the most influential artist of Flemish Baroque tradition. Rubens's highly charged compositions reference erudite aspects of classical and Christian history. His unique and immensely popular Baroque style emphasized movement, color, and sensuality, which followed the immediate, dramatic artistic style promoted in the Counter-Reformation. Rubens specialized in making altarpieces, portraits, landscapes, and history paintings of mythological and allegorical subjects.
In addition to running a large studio in Antwerp that produced paintings popular with nobility and art collectors throughout Europe, Rubens was a classically educated humanist scholar and diplomat who was knighted by both Philip IV of Spain and Charles I of England. Rubens was a prolific artist. The catalogue of his works by Michael Jaffé lists 1,403 pieces, excluding numerous copies made in his workshop.[2]
His commissioned works were mostly "history paintings", which included religious and mythological subjects, and hunt scenes. He painted portraits, especially of friends, and self-portraits, and in later life painted several landscapes. Rubens designed tapestries and prints, as well as his own house. He also oversaw the ephemeral decorations of the royal entry into Antwerp by the Cardinal-Infante Ferdinand of Austria in 1635.
His drawings are predominantly very forceful and without great detail. He also made great use of oil sketches as preparatory studies. He was one of the last major artists to make consistent use of wooden panels as a support medium, even for very large works, but he used canvas as well, especially when the work needed to be sent a long distance. For altarpieces he sometimes painted on slate to reduce reflection problems.

The garden designed by Rubens at the Rubenshuis in Antwerpen


Rubens was born in the city of Siegen to Jan Rubens and Maria Pypelincks. He was named in honour of Saint Peter and Saint Paul, because he was born on their solemnity.[3] His father, a Calvinist, and mother fled Antwerp for Cologne in 1568, after increased religious turmoil and persecution of Protestants during the rule of the Habsburg Netherlands by the Duke of Alba.
Jan Rubens became the legal adviser (and lover) of Anna of Saxony, the second wife of William I of Orange, and settled at her court in Siegen in 1570, fathering her daughter Christine who was born in 1571.[4]
Following Jan Rubens's imprisonment for the affair, Peter Paul Rubens was born in 1577. The family returned to Cologne the next year. In 1589, two years after his father's death, Rubens moved with his mother Maria Pypelincks to Antwerp, where he was raised as a Catholic.
Religion figured prominently in much of his work, and Rubens later became one of the leading voices of the Catholic Counter-Reformation style of painting[5] (he had said "My passion comes from the heavens, not from earthly musings").[citation needed]

Portrait of a Young Scholar, from 1597


In Antwerp, Rubens received a Renaissance humanist education, studying Latin and classical literature. By fourteen he began his artistic apprenticeship with Tobias Verhaeght. Subsequently, he studied under two of the city's leading painters of the time, the late Mannerist artists Adam van Noort and Otto van Veen.[6] Much of his earliest training involved copying earlier artists' works, such as woodcuts by Hans Holbein the Younger and Marcantonio Raimondi's engravings after Raphael. Rubens completed his education in 1598, at which time he entered the Guild of St. Luke as an independent master.[7

In 1600 Rubens travelled to Italy. He stopped first in Venice, where he saw paintings by Titian, Veronese, and Tintoretto, before settling in Mantua at the court of Duke Vincenzo I Gonzaga. The colouring and compositions of Veronese and Tintoretto had an immediate effect on Rubens's painting, and his later, mature style was profoundly influenced by Titian.[8] With financial support from the Duke, Rubens travelled to Rome by way of Florence in 1601. There, he studied classical Greek and Roman art and copied works of the Italian masters. The Hellenistic sculpture Laocoön and His Sons was especially influential on him, as was the art of Michelangelo, Raphael, and Leonardo da Vinci.[9] He was also influenced by the recent, highly naturalistic paintings by Caravaggio. 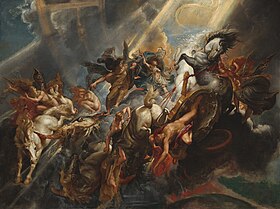 The Fall of Phaeton, 1604, in the National Gallery of Art in Washington, D.C.


Rubens later made a copy of Caravaggio's Entombment of Christ and recommended his patron, the Duke of Mantua, to purchase The Death of the Virgin (Louvre).[10] After his return to Antwerp he was instrumental in the acquisition of The Madonna of the Rosary (Kunsthistorisches Museum, Vienna) for the St. Paul's Church in Antwerp.[11] During this first stay in Rome, Rubens completed his first altarpiece commission, St. Helena with the True Cross for the Roman church of Santa Croce in Gerusalemme.
Rubens travelled to Spain on a diplomatic mission in 1603, delivering gifts from the Gonzagas to the court of Philip III.[12] While there, he studied the extensive collections of Raphael and Titian that had been collected by Philip II.[13] He also painted an equestrian portrait of the Duke of Lerma during his stay (Prado, Madrid) that demonstrates the influence of works like Titian's Charles V at Mühlberg (1548; Prado, Madrid). This journey marked the first of many during his career that combined art and diplomacy.
He returned to Italy in 1604, where he remained for the next four years, first in Mantua and then in Genoa and Rome. In Genoa, Rubens painted numerous portraits, such as the Marchesa Brigida Spinola-Doria (National Gallery of Art, Washington, D.C.), and the portrait of Maria di Antonio Serra Pallavicini, in a style that influenced later paintings by Anthony van Dyck, Joshua Reynolds and Thomas Gainsborough.[14] 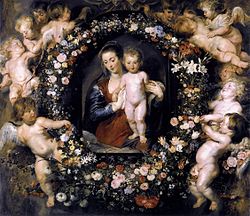 Madonna on Floral Wreath, together with Jan Brueghel the Elder, 1619


He also began a book illustrating the palaces in the city, which was published in 1622 as Palazzi di Genova. From 1606 to 1608, he was mostly in Rome. During this period Rubens received, with the assistance of Cardinal Jacopo Serra (the brother of Maria Pallavicini), his most important commission to date for the High Altar of the city's most fashionable new church, Santa Maria in Vallicella also known as the Chiesa Nuova.
The subject was to be St. Gregory the Great and important local saints adoring an icon of the Virgin and Child. The first version, a single canvas (now at the Musée des Beaux-Arts, Grenoble), was immediately replaced by a second version on three slate panels that permits the actual miraculous holy image of the "Santa Maria in Vallicella" to be revealed on important feast days by a removable copper cover, also painted by the artist.[15]
Rubens's experiences in Italy continued to influence his work. He continued to write many of his letters and correspondences in Italian, signed his name as "Pietro Paolo Rubens", and spoke longingly of returning to the peninsula—a hope that never materialized.[16]

He was one of the most beautiful artists I remember while in my Art History classes in college and one of the focal points I recall is my
instructor showing us how to be invited into a painting.  Do you see something red in the painting? It invites the eye in, and lets it explore the other details of line, color, form and unity.


Posted by Laura J at 3:46 PM
Email ThisBlogThis!Share to TwitterShare to FacebookShare to Pinterest