Where's the castle? you ask. It's the gray silhouette at the V of the mountain valley. Nope, that's no castle at upper right. It's a happy accident I'm calling an abandoned Roman fort. It's already a thousand years old in the scene, set in the year 1099, when the First Crusade is winding down. There's a signpost up ahead--not the Twilight Zone, but a fictional locale on the Dalmatian Plateau, across the Adriatic Sea from Italy. The castle and its school of magic is the launch point to a parallel world, courtesy of the dimensional gate at the lower frontier of its haunted labyrinth.

We've established that clouds must have soft edges. One way is a wet blend, working fast because of acrylic's short drying time. An easier and more painterly way is dragging a nearly dry brush along the edge, coaxing pigment along the grainy canvas surface.

Now the real fun! Low light here obviates the need for fussy detail in the rocks. Load the brush with several colors (don't forget blue), then apply in a stippling method for clusters of unpredictable shapes. Brush it for instant wet blends where you want subtle shadows. This necessarily creates an impasto technique with raised whorls and ridges, though it's only visible on the original.

Another fun touch is allowing some peaks of white canvas to show through. These make additional shapes, maybe patches of snow, or just random glints that sparkle for added interest--just one more mystery luring the viewer into your world. Take these techniques for a spin to see if they work for you. 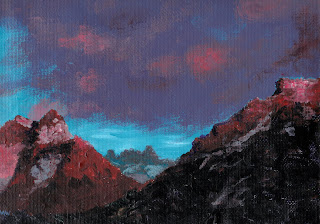 Posted by Nick Nuko at 7:06 AM
Email ThisBlogThis!Share to TwitterShare to FacebookShare to Pinterest