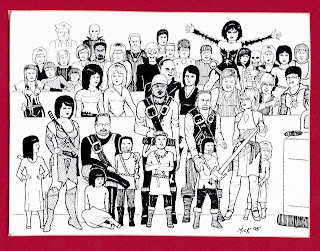 The fastest way to learn a language is to dive in--the old sink or swim ploy. If you move to Frankfurt, you'd better learn some German right quick. The same analogy applies to your cast. Any number of methods will shake them out of their (translate your) comfort zone. That sharpens them in their little cubicles when you reach up there to get them. We'll look at these in order of least to most effective.

The Character Interview This method is limited to sounding out their opinions, including thoughts about fellow stage mates. When you get them talking (usually on something you feel strongly about), you identify pet words and phrases that help make them individuals. The downside is that you end up with a lot of writing that isn't readily usable.

They Interview Each Other Imagine a sort of time out when you aren't sure how characters feel about an upcoming plot item, or what actions they'll take. The advantage here is getting twice the work done. Adding a third person to the mix complicates things, unless it's a sidekick that helps define one of them. The con is the same: a lot of writing you can't use, short of dropping it into a scene it just happens to fit.

Short Stories Established authors sometimes write these as a stopgap between novels. It also broadens the story world by focusing on a minor aspect you don't have time for in an epic. Suppose a pair takes a working vacation to a remote inn. You'll need customs, politics, and commerce to make it an interesting background. Should the subject come up in a later conversation in your novel, someone can comment with authority and realism, and avoid contradictions (these have already been hashed out).

Fan Fiction Here you immerse someone in situations that don't happen in their world. How do they react on the bridge of the Enterprise?--deal with acid-tongue Fred Sanford? Do they complain about the weather, or marvel at nature's darker moods? You still need something to carry back to the story world. Now you know how they'll handle similar situations, how they label unfamiliar items, what core values are affronted, whether they escalate or defuse a crisis. The list goes on.

Spinoff Series These are automatically stand-alone stories that put a minor character in the spotlight--one that  would otherwise inappropriately steal the show. Whenever this person is on stage in your main venue, they'll be fully prepared to be themselves.

In short, don't limit a character's stage time to novels; they have enough work to do without figuring out who they are.

Posted by Nick Nuko at 11:20 AM
Email ThisBlogThis!Share to TwitterShare to FacebookShare to Pinterest