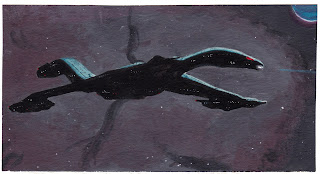 Moast relaxed in his quarters during a routine cruise in the Deneb system. Though the starghip Orchidia had a crew of only five, they trusted the namesake AI to be alert for threats. That made her rare in-person visits all the more unnerving.

She materialized in front of Moast's recliner, the avatar having been tweaked to be less robotic. Now it looked like a sex doll. She just couldn't get it right. Moast set aside his book to await the bad news.

"What is pineapple gum?" she began. "How does it relate to the collapse of Earth civilization?"

Relieved, Moast had to laugh at her resourcefulness. "So you've connected me with the New Vigilantes." His rise to fame as a soldier of fortune led to the Consortium choosing him as commander of Orchidia. "It's complicated. Recall your data on the rise of the police state."

She had that in a picosecond. "Villainization of police left them afraid to become involved in anything short of a murder. Localities became lawless as police grew increasingly insular and heavily armed. They became nationalized, ruthlessly enforcing the dictates of whomever was currently in power."

"While the cities rotted," Moast supplied. "Pull up a chair and I'll tell you a story." The jest, of course, went right past her.

Brenner wandered into the local gas station for his next assignment. He had to wait for a couple of gamblers playing lotto. As usual, the dusty cans of charity reject food held no interest. Worse yet, the ongoing supply disruption had shelves bare of goodies. Brenner had hope when Burt, the station owner, came out of his glass cage with several boxes. Until he saw what it was.

The paunchy gas jock slid the boxes onto a shelf. "As I explained, it comes from Mexico. They're the only ones the insurrectionists aren't at war with, and it's the only part of the shipment they don't want." Burt clapped him on the back. "Don't know what I'd do without my lab guy. I got a kick out of this morning's web news." TV media, naturally, patently ignored anything that hurt the insurrection. "You got those looters and rioters plenty sick."

Through his contacts, Brenner, himself a former micro lab worker, had access to various hospital pathogens being cultured for drug studies. Long drives to riot sites were worth it. His latest caper involved norovirus, that fall-winter rite of passage for the intestines. The stuff was explosively contagious. Twelve hours after exposure, rioters were losing it from both ends. They were getting skittish about rioting in the first place.

"Tonight," Burt went on, "we got a more local problem. Some bikers have been zooming around at all hours terrorizing our quiet streets. They made the mistake of getting predictable." He handed Brenner a note.

Brenner was to be one of the point men in an ambush. "I'll check in with the guys. Consider it done."

Near dusk, four bikers in arrogant close formation roared down a residential street. Brenner reacted to the pull on the rope, drawing his end tight around a fence post. Four riders were neatly dismounted as their bikes continued on, one crashing into a parked car. Brenner joined four others armed with iron pipes, which they applied liberally to keep the riders down. A rental truck backed onto the street. More vigilantes came out to load the bikes. After having their tanks sugared, these would be dumped in a field until someone stripped them for parts. Cops were never called, nor would have responded anyway.

A slight snafu happened when Brenner found the homeowner aiming a gun at him. "Be cool, man--we're on your side, you know."

"I know. You guys are heroes. Any chance you're recruiting? I've got military skills."

The avatar stared placidly. "I intuit that you await a moral assessment."

Moast saluted with his coffee. "Orchidia, I'm starting to rub off on you."