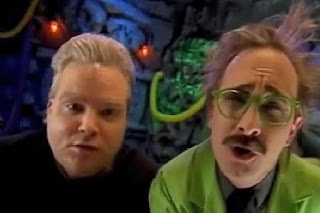 Dr Clayton Forrester and sidekick Frank activated the comlink to their orbital lab. Their former handyman Joel was stranded there, required to watch cheezy films to see how long it would take him to wig out. But Joel had built some robot pals, and actually had fun dishing on the scifi of yesteryear.

Forrester Greetings, Joel. This pre-Thanksgiving turkey is 1958's Attack of the Fifty Foot Woman. It stars Allison Hayes, who later played one of Sgt. Carter's girlfriends on Gomer Pyle. 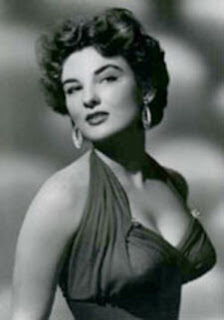 Joel That was on some episodes they filmed in Washington D.C.
Forrester Don't change the subject! So what turns Nancy Archer into a human Godzilla? It appears she was a boozer who had a nervous breakdown. Who's gonna believe she saw a UFO?--which is only a crappy glowing sphere in the first place. Her cheating husband wants to get her committed so he can take over a 50-million-dollar estate.
Crow How original. 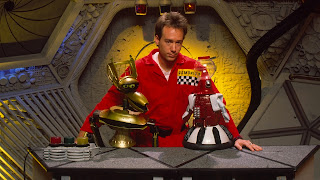 During the climactic scene, Nancy, impervious to bullets, falls victim to a shotgun that blows up a transformer. Clutching her dead husband in a giant hand, she's electrocuted. The boys groan in protest.

Joel No, no! What happened to the bald guy? Let him take her aboard his UFO!

Crow And then blow up the world.

Posted by Nick Nuko at 11:58 AM
Email ThisBlogThis!Share to TwitterShare to FacebookShare to Pinterest