As a Christian, and a reader of Celtic/ Pagan traditions of which in a time before Christianity came to the British Isles, many of these have carried over because it's a significance of our historical heritage. It's the joining of Christianity as the sole faith/ belief that Jesus is our Savior.

Of course we have connections to the old faiths, because they were carried over. The Gaelic traditions are still evident in small pockets of Ireland because they carried it over into Christianity. God is good, God is wonderful. Once we were one with Nature/ God. At this time, we are one with God, and his extension of love through the baby. Why is Jesus different? Because he came across space & time to our Earth home. Supernatural exists. We should always try to be one with Nature, thank God for the bountiful crops and such etc.
Let God into your house, read a script of the Bible...let your heart be warm. 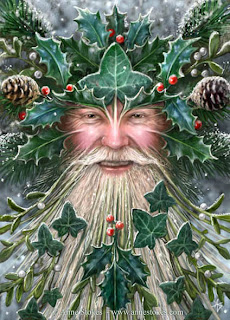 When the days grew colder and the nights grew longer, people of ancient times would light candles and gather round fires to lure back the sun. They would bring out their stores of food and enjoy feasting and festivities. Dances were danced and songs were sung and all would delight in decorating their homes.

Evergreens were cut and brought indoors to symbolize life, rebirth and renewal. They were thought to have power over death because their green never faded, and they were used to defeat winter demons and hold back death and destruction. Because of their strength and tenacity, they were also believed to encourage the Sun’s return.

Holly, which represents the masculine element, was often used to decorate doors, windows and fireplaces. Because of its prickliness it was thought to capture or ward off evil spirits before they could enter a home and cause harm. The holly leaves, symbolic of the Holly King, represent hope, and the red berries represent potency.

Mistletoe, which represents the female element, also holds much importance as it was used by Druid priests in special ceremonies during the Winter Solstice. They believed that its green leaves represented the fertility of the Mother Goddess, and its white berries, the seed of the Forest God or Oak King. Druids would harvest the mistletoe from sacred oak trees with golden scythes and maidens would gather underneath the trees to catch the falling branches, preventing them from falling to the ground; for if this happened, it was believed that all sacred energy in the plant would pour back into the earth. The branches and sprigs were then divided and distributed to be hung over doorways as protection against thunder, lightning and other evils. Mistletoe was also worn as an amulet for fertility, or hung above the headboard.

The Yule Tree was also another important symbol in pagan tradition. Originally, it represented the Tree of Life or the World Tree among early pagans. In ancient times it was decorated with gifts people wanted to receive from the gods. It was adorned with natural ornaments such as pinecones, berries and other fruit, as well as symbols sacred to the gods and goddess. In some holiday traditions, garlands of popcorn and berries were strung around the tree so that visiting birds could feed off the tree as well.

The custom of burning the Yule Log began with the ancient Scandinavians who burned a huge log, felled from and Ash tree, to honour their god Thor. In the Celtic tradition, a continual hearth fire was kept to prevent spirits from entering the home. In order for the fire to keep burning, a large Oak tree was felled and brought into the home where the tree was placed trunk first into the hearth, with the last remnants set aside to burn with next year’s fire. It was also believed that the longer the Yule log burned, the faster the sun would come to warm the earth.

Other Yule Traditions and Symbols

Candles were another way to have an eternal flame within the home. They symbolized the light and warmth of the sun and were used to chase away evils and lure back the returning sun/son.
Wreaths were also traditional in ancient times for they symbolized the wheel of the year and the completion of another cycle. They were made of evergreens and adorned with cones and berries and hung as decoration throughout the home. They were also given as gifts to symbolize the infinity of goodwill, friendship and joyfulness.
Bells were often rung during the Winter Solstice to drive away demons that surfaced during the dark time of the year. They were rung in the morning as everyone began to wake to chase away the dark days and herald in the warmer, brighter days following the solstice.
Elves first became associated with Yule because the ancients knew that the Spirits that created the Sun inhabited the land of Elves. By including elves in the Yule celebrations, the ancients believed they were assuring the elves assistance in the coercion of the Sun to return.
Gingerbread was considered to be a specialty bread during this time since ginger had not been available until the Crusaders brought it back in the 11th century. There were strict laws regarding specialty breads in that time, so gingerbread was only allowed to be produced during the holidays and thus, it became associated with winter and Yule.
Wassail derives from the Old English words waes hael, which means “be well”, “be hale” or “good health”. It is a strong drink, usually a mixture of ale, honey and spices or mulled apple cider. When pagans went into the forest to fell the great oak for the Yule log, they would anoint the tree with wassail and bedeck them with wassail-soaked cakes, thus the ritual of wassailing was born. At home, the wassail would be poured into a large bowl during feast time and the host, when greeting his or her guests, would lift a drink and wish them “waes hael”, to which they would reply “drinc hael”, which meant “drink and be well”.
Carolling was also a popular Yule tradition when young children honoured the Winter Solstice with song. They would go through the villages, singing door to door. The villagers, in return, would reward them with tokens and sweets and small gifts which symbolized the food and prosperity given by the Mother Goddess to all her Earthly children.
Nature Symbols of Yule: Holly, Oak, Mistletoe, Ivy, Evergreens, Laurel, Bayberry, Blessed Thistle, Frankincense, Pine, Sage, Yellow Cedar.
Food and Drink of Yule: Yule Log Cake, Gingerbread, Fruits, Berries, Nuts, Pork dishes, Turkey, Eggnog, Ginger Tea, Spiced Cider, Wassail
Colours of Yule: Red, Green, White, Silver, Gold Red represents the waning Holly King. Green represents the waxing Oak King. White represents the purity and hope of new Light. Silver represents the Moon. Gold represents the Sun/Son.
Stones of Yule: Rubies, Bloodstones, Garnets, Emeralds, Diamonds
Activities of Yule: Carolling ~ Wassailing the Trees ~ Burning the Yule Log ~ Decorating the Yule Tree ~ Exchanging Gifts ~ Kissing under the Mistletoe
Deities of Yule: Goddesses: The Great Mother and Earth Goddess, Freyja, Gaia, Diana, Bona-Dea, Isis, Demeter Gods: Mabon, The Sun God, The Star (Divine) Child, The Oak King, The Holly King, The Green Man, The Red Man, The Horned One, Odin, Lugh, Apollo, Ra
What Yule traditions and symbols still appear in your Holiday celebrations? Did you know the origin of some of these Yule traditions or did they surprise you? We’d love to hear from you in the comments below!
~ Daniela Masaro and Sacred Earth Journeys

Posted by Laura J at 1:23 PM
Email ThisBlogThis!Share to TwitterShare to FacebookShare to Pinterest