A photog could do a lot worse on a September afternoon. Just the other side of a sagging chicken wire fence lay this forgotten little recess on my aunt's property. The magical pool of light drew out my muse, but something was missing--the human touch. The addition of steps and a crumbling wall create a porch from which settlers once communed with the fairies. Sunlit saplings lend depth to the scene as they merge with shaded trunks closer in.

The camera's cold eye had the foreground a uniform dark green (translate boring). Stippling it with green, orange and blue lays down a random carpet of leaves and shrubs, which viewers will think took hours of careful planning. But nature shouldn't be planned, and besides, that's too much like work. Since the foreground is a supporting element, have fun and let nature fly.

This might be called a 'ground glass' method. You could slap it on with glitter-paint abandon, unless your muse nags you about cheating, or maybe cut fingers. But we can always simulate the thing. Unlike the careful precision of Pointilism, these touches vary widely in shape and size, though we have the same goal of juxtaposing light against dark. Wrap the trees in light by edging them in ultra thin white with the side of a palette knife. Start with a thin wash in the background, adding detail as you work toward the foreground. Haven't yet tried multiple colors on the brush? It's a good way to let unexpected things happen, filling in discrete areas out of which your guiding hand draws touches of realism. 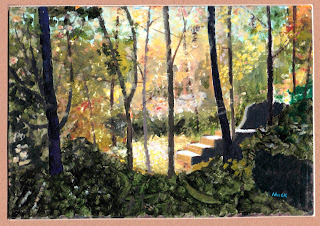 Posted by Nick Nuko at 5:59 AM
Email ThisBlogThis!Share to TwitterShare to FacebookShare to Pinterest