A Turn Of A Phrase 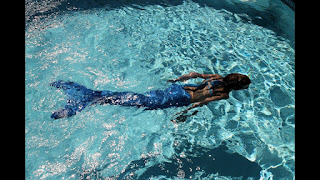 Six Forks Palladium hosted a record crowd this weekend. As regional manager, Baxter Symons wished they'd buy more sporting goods, but at least the mermaid franchise was packing them in. The former aquatics park necessarily kept the meandering water courses, now channels for the circulating mermaids. Fences and short bridges kept shoppers safe as they browsed hunting and fishing goods. Symons could hardly think above the crowd noise and Jerry Reed on speakers.

East bound and down, loaded up and truckin', we gonna do what THEY say cain't be done.

The mermaids made colorful serpentine paths at the bottom of the main concourse. The popular coin toss happened at noon, when the sun blazed down through skylights. The girls scooped them into small buckets, then brought these up for pouring into a clam shell on a center island (too many cheapos used pennies).

But for how long? That was the question for Corporate.  The three RN students faced a decision on graduation day: become full-time nurses, or continue making time for a lesser-paying sideline. Symons was therefore authorized to sweeten the purse if he had to. He used an employee entrance to access the back of the "mermaid palace", a break room they reached by swimming beneath privacy streamers in an alcove. The mission called for gaging their job satisfaction indirectly to ensure natural responses. After drawing a coke on ice (the machines were free back here), he settled against the wall in a folding chair and reviewed their prior meetings on payday.

Blonde Binia wore white, with green and purple at the flukes. It marked her as erstwhile leader of the pod. Red-haired Ellie sported emerald scales, while the brunette Sirtis wore blue. Presently their heads popped up from the secluded waterway.

"No, ladies, it isn't payday." Symons grinned at their perplexed faces. "I just want to find out how things are going, whether you need anything."

Water streamed as they hoisted themselves onto the tiled floor, fins dangling in the channel.

"HyperOx and Antiprune," Ellie said. She reached back to punch a button, dispensing a tuna-and-crackers box.

Symons recalled these as trade names for some expensive performance aids. HyperOx pills let them stay down as long as ten minutes. Antiprune oil protected their skin from getting waterlogged. "No problem. Look, I'm gonna put in the order, so don't let me crimp your style." He took his time doing that on his pad.

Sirtis pulled her own pad from a low-set locker, and passed it across to Binia. The screen showed some kind of gold, duck-looking robot with a wire basket behind his head.

"Remind me which one this is," Binia said.

"Everyone's favorite MST3K alum--Crow," Sirtis replied. It was so much Trek-speak to Symons.

"I've seen it," Ellie put in. "A guy and two droids who riff on snarky films. Who'd watch that?"

Sirtis frowned. "Of course the riffability index is maxed. How else can you riff on it?"

"I've heard they're bringing it back," Ellie said, "as long as it catches on."

Sirtis glanced skyward, mouth rounded in despair. "That will take forever and two-thirds."

Excusing himself to make a call, Symons stepped out into a short connecting hallway.

"Symons," said the CEO. "What's the good word. Do the girls like their gig?"

"I'll have to come right out and ask them, I'm afraid."

"Didn't their talk let anything slip?"

"I couldn't make heads or tails of it. We'll need to bring in a Trekkie type who speaks Klingon."

Posted by Nick Nuko at 5:05 PM
Email ThisBlogThis!Share to TwitterShare to FacebookShare to Pinterest