Previous Outed as a gorgon by the fairy Chianna, Stheno runs away, aiming to confront the Inquest and recover her magic mace.

The fairy Chizora returned to the healer's cottage, where the five members of Team Dan passed the night on pallets. The young wizardress served up cornmeal fritters wrapped in bacon. Chizora landed on Dan's shoulder and tugged at an ear, her fairy speak like so much baby cooing. She did aerial cartwheels, urging the group to follow.

"Saddle up," Dan said. "That girl might have some hellified power, but she doesn't need to be out there alone."

Zena slapped her katana into its back sheath. "Yeah, like, but is she friend or foe?"

"I believe," said the dark-haired healer, "she's lost in a strange world."

The blonde fairy Chianna drifted near, conjuring an image of a tiara.

"She's royalty?" The tall bro Pete strapped on his black sword Soul Stealer, which had once taken down a walking tree. "How 'bout that. Princess Petrify."

"Not if we can help it," Bonnie averred, catching up with Ed at the door,

Dan opted for a low key trek, led by Chizora's tracking skill. She returned and fairy-spoke with Chianna, who created an image of a brigand. "Time for the third fairy, to keep this quiet. Chiella!" A black-haired fairy in red spiraled from the ring. "Let's go, men!" 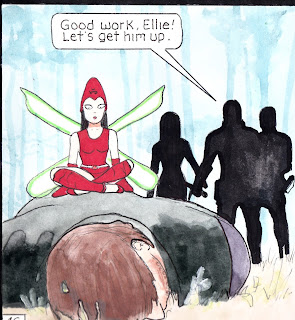 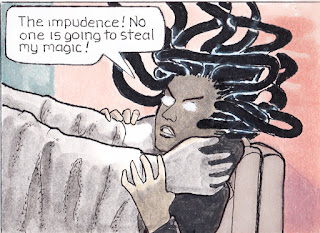 "The impudence!" Serpents exploded from her cowl. "No one is going to steal my magic!" Her features went full gorgon.

Chiella flew interference for Chizora, dropping guards with fairy music. Chizora directed a stream of exploding stars at the door they guarded, darted inside. It took all three fairies to lift the mace, which they carried toward the pavilion.
Seeing it, Stheno let her serpents relax. "My mace! Bring it to me, and we shall escape this place. Let the mercenaries beware."

Posted by Nick Nuko at 8:23 AM
Email ThisBlogThis!Share to TwitterShare to FacebookShare to Pinterest