In the eastern wilds of the Blight

A band of wolven attacked an Inquest compound as the priests scrambled for cover. Kyzor, High Inquestor for this region, waded into them with a magical mace. Its barbed ball transformed into a giant gorgon head. Poisonous serpents lashed at wolven not yet swept by its baleful gaze. Its mouth opened impossibly wide to bite one in half.

Kyzor had never seen it so enraged, but was still surprised when it broke free. "The gorgon is loose! Do not look upon it!" One of the priests didn't heed the warning in time and joined the growing accumulation of stone carvings.

Briefly euphoric at freedom, Stheno floated among her ghastly handiwork, exploring their rigid contours with serpentine tentacles. The priest with the mace presented a problem: she could not get close without being recaptured. Yet outside the mace, she would begin to age as mortals did, and the floating head required enormous energy to maintain. It wasn't safe to regain human form, so she raced through the forest, leaving a trail of petrified creatures in her wake.

At length, cold and hungry, she managed to steal a simple robe from a band of nomads. Two of the men tried to bag her, but with help from the serpents, she escaped, and the insouciant louts paid the price. The next obstacle was more formidable--a drawbridge spanning a deep gorge. Beyond lay rolling hills, a safe plateau from the terrors of this place. Cookfires promised warm refuge from the  night.

An old matron peered out a side door of the tower. "Who's out there?"

"I am a princess of Ionia, betrothed of Prince Iatos. You will lower your bridge." Ah, Iatos, dust these many centuries, left behind on another world.

"So your cronies can charge across? Not tonight, missy. Try again when it's light enough to see." 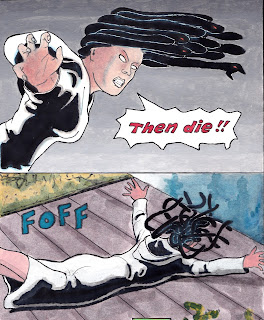 "Then die!" Serpents surged forth in an attempt to form the floating head, but it appeared impossible without the mace. Stheno fell on her face. Seeing this, the crone fled her post, and Stheno saw no option but to try the dubious sanctuary of a colorful glade.

"Odd." She stared at a bend in the stream. "Was not that tree on the other side a moment ago?" She had a few sips of water before lumbering branches reached down to seize her. With a withering gorgon stare, she caused the tree to petrify, and its branches broke under their own weight, dumping her back at the stream with a scratched arm. 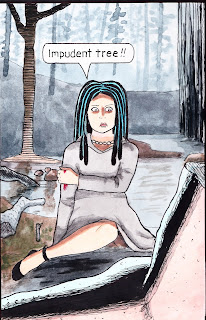 In the distance, something small flitted into view. What fresh affrontery was this?

Posted by Nick Nuko at 8:50 AM
Email ThisBlogThis!Share to TwitterShare to FacebookShare to Pinterest