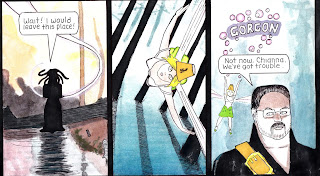 Previous:  Having escaped the mace, the gorgon Stheno has various misadventures before coming across Team Dan, a possible source of aid.

The fairy Chianna, scouting for Team Dan, raced back to report a curious--and possibly dangerous--discovery. She had never encountered a gorgon in human-passive form, safe for the moment to look upon. Yet this one was possessed of full gorgon powers, had about her the aura of an elite progenitor from the home world of the humans. That meant immense power, of the kind wielded by vampire lords and fairy elementals. Was this one friend or foe? Dan must be warned at once.

Stheno followed, coming upon a wooded glade infested with ghouls. The group of five up on the ridge--three men and two women--were clearly mercenaries. Still, they weren't here to prey on the weak, but to fight zombies. The women were probably spell casters, and that meant a chance for Stheno's injured arm to be healed. She decided to help them, unobserved. Since they were near the drawbridge she had previously failed to cross, these people might succeed in the crossing, and that meant food and shelter. And so, she got the attention of a ghoul and gave it the gorgon sight. It began to petrify, but the woman in red had begun a charge towards it, having seen it shambling about. 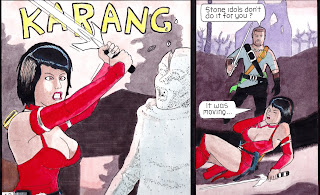 Ed knew better than to laugh. "Stone idols don't do it for you?"

Zena lifted up on elbows, head spinning from the vibration of steel on stone. "It was moving, I tell you!"

Ed helped her up. "These others are real enough. Let's get busy." The group set to with swords, but Zena decided to stand back and light them up with fireballs. The wizardress Bonnie ensnared them in tangles of weird growth.

Zena's bad luck continued after getting tackled from behind. She whirled and took off a zombie head with messy results.

Stheno watched the uneven battle until all the ghouls had been dispatched. She crept close enough to hear their talk. The one called Ed addressed the fairy that had just alit on his head. "Where ya been, cupcake?" Apparently the nickname referred to the fairy's hat. But the fairy was very much aware of Stheno, turning back to look at her. She'd try again to warn the group about the gorgon. There was nothing to do but follow them toward the drawbridge. The gatekeeper's tower was a beacon of warmth against the cold night of the Blight, and Stheno meant to have it.

Posted by Nick Nuko at 9:45 AM
Email ThisBlogThis!Share to TwitterShare to FacebookShare to Pinterest