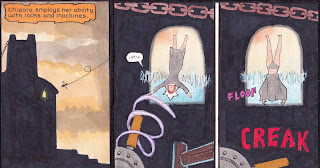 Previous  The gorgon Stheno watches Team Dan arrive at the raised drawbridge she had failed to cross.

From the fairy ring, Dan summoned the second of two, called Chizora. She flitted across the gorge and into the deserted bridge tender's tower. Since her specialty was locks, gadgets, and locating, she had little trouble bespelling the chain lever. Team Dan trotted across as soon as the bridge cycled down.

Stheno prepared to follow, briefly distracted by a tug at her head; one of the serpents had sprung out to catch a mouse. As the tendrils settled back in place--one swollen by a lump--she hurried across to keep the mercenaries in sight. They could be the only hope of recovering the magic mace she had escaped from. Without it, transforming into the giant flying head wasn't possible.

Having found the tower deserted, the five members of Team Dan found a nearby cottage where lived the village healer. She had settled here some years before, a refugee from Earth in the year 1099. The group partook of tea and various fried vegetables. When a plain-robed girl came in, the fairy Chianna reacted. This time, she would not be ignored in putting out the warning. 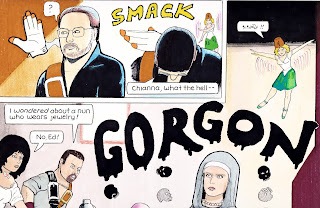 No one thought to check the tower again. Stheno found the bridge tender's lunch and set to with gusto. She would pass the night here in a halfway decent peasant bed. The morrow would see her set out to recover the mace alone. There was too much risk of the mercenaries trying to profit from her capture.

Stheno addressed the plain fairy watching from atop a pile of firewood. "If you oppose me, I must destroy you." The fairy merely flicked her wings, the winsome grin never wavering. "Be warned that my serpents never sleep." The fairy groomed a wing with a foot, curiously fly-like.

"Well then. Let us hope your conjurer does not accost me this night. I shall reclaim my mace at any cost."

Posted by Nick Nuko at 3:58 PM
Email ThisBlogThis!Share to TwitterShare to FacebookShare to Pinterest