The Right Word in the Right Place 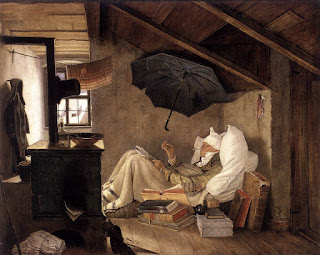 Illustration: "The Poor Poet" by Carl Spitzweg. Aren't we all?

Consider the first three words in "Soldiers went across the field." What kind of soldiers? Regiment size is much larger that a squad; sappers are specialists; cavalry is mounted. 'Went' becomes 'slogged' when the ground is wet, and 'waded' if it's flooded. 'Splashed' connotes a hasty crossing, where 'swept' is the action of a victorious army. 'Across' is less precise than 'through', with its implication of obstacles. 'Past' hints at avoidance. Up or down shows directional angle.

Look at each word in a sentence. Typically you'll improve (a better word is 'hone') it one word at a time. Choose those that home in on culture, detail, occupation, mood, and defining action. The right word can replace an entire sentence or two of explanation.

Punctuation also plays a role. "He swept the coins unsorted into the tiller." No commas needed. But:

"He swept the coins, unsorted, into the tiller." A slight emphasis is applied.

"He raked the coins unsorted into the tiller." Much is said by 'raked' with its implication of haste and anger. Strong emphasis on 'unsorted' suggests he's been goaded, as if he's not supposed to notice a particular coin for plot reasons.

Verbs 'Ratcheted' vs 'pulled'. The former indicates gears, chains, a clanking sound, men and machines, and a housing, such as a drawbridge turret. 'Lambasted' vs 'thrashed'. The former is seldom used, which makes it a refreshing alternative. 'Sneak' vs 'skulked'. The latter doesn't require continuous movement. It suggests skill, stealth, and sinister intent, with erratic moves of opportunity. But 'sneak' will do if all you need is to move a character toward a goal quickly.

Nouns When it comes to saddles, cinch is more authentic than strap (or 'tighten' if cinch is a verb). Use the relevant part of a device or weapon for realism without getting carried away. I once read a book with the help of a dictionary, constantly having to look up the parts of a suit of armor. Another author used the bewildering variety of sail on a man-o-war. He might have a midshipman explain a term to a landlubber, without being as obvious as the old describe-himself-in-a-mirror ploy.

Adjectives 'Upside' the head has a subculture feel. The perpetrator isn't all that moral or educated. 'Sans' lends sophistication to a narrator lacking from its counterpart 'without'. This is why poetic characters are so much fun. The right modifier can sharpen a word like 'malevolence'. Coy malevolence portrays an evil sorceress with a playful nature. By comparing the italics with the explanation, you get an idea how to reduce word count, which provides more valuable stage time for your hero.

Let's summarize with our original sentence. "Sappers skulked through the field." Some of them lie in wait; some pause for sabotage; the rest do rear guard or scout ahead. The right word sets off a cascade of motion, sound, and visuals for your reader.

Posted by Nick Nuko at 8:48 AM
Email ThisBlogThis!Share to TwitterShare to FacebookShare to Pinterest