Odkeitl's camp maintained infuriating indifference to the upcoming fight, one which could cost them a sorceress. It's already decided by the fates, Okdeitl decreed. Nor did Dan feel any better watching Hulda train. She did so with men, using a man's sword. Valkris, though a competent swordswoman, had to concede strength and endurance. She even chose a shorter and lighter blade.

Dan sauntered down to where the jovial Kettil, second in command, supervised the refloating of their ship. It had been sunk to drown rats. Ed and Pete were clowning with Odkeitl's brother, Ejulf.

Dan put an arm confidentially about both. "Why is it when exploring another language, we go straight for the bad words? I guess you didn't notice Valkris caught part of that."

"Not to worry," Dan assured. "She's arranged a little Norse lesson for us, maybe to teach some nice words."

"Boogity," Pete enthused. "We don't mind holdin' hands with her all day."

When the appointed time came at noon, the trio sat on a log facing a grassy mound about three feet tall. It was mounted by four-year-old Vasdis, who carried a short list with businesslike purpose.

Each was obliged to repeat ek heiti (your name here). When it was Ed's turn, he said, "Ek heitr Ed."

Pete tapped his thigh. "Don't get her mad, homey."

Near dusk, the fighters squared off around a central fire that threw sparks high into surrounding trees. The usual taunts ensued, though Valkris only saw the need for a single one. The fight began in earnest, the kang and ping of blows drawing shouts from either camp. Valkris conserved energy and made no risky moves, which suited Hulda, who could go the distance. As the duel wore on, Valkris showed the strain of fending off the vigorous blows. 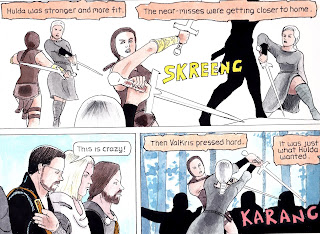 Dan couldn't hold back. "She'll be killed!" He started to rise.

Odkeitl put the back of his hand to Dan's chest. "It could happen."

All seemed lost when Valkris was forced to one knee. Hulda delivered an overhead meant to end it. Valkris raised her left forearm to somehow stop the blade. She took advantage of the momentary surprise to lash out with a spinning cut to the neck. 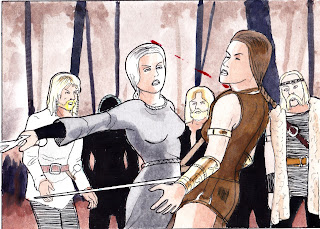 "We call foul!" cried Hjorvald. "Only armor could stop the blow, and we agreed to none!"

Odkeitl strode forth as Valkris removed the forearm bracer. It was indeed part of her black mission armor. "Valkris wore only one, while Hulda had two--of metal that could also stop a blow."

"Don't forget," Kettil added. "We gave you everything you wanted. An impossible fight and a chance to kill her!"

The old alderman made his decision. "The fight is judged fair."

"Nei!" Hjorvald lunged at an apparently unprepared Odkeitl and payed the price.

Dan came slowly to his feet. "Now I get it. There's no greater concession you could have made. They won't challenge you again. . . ."

"As you say." Odkeitl cleaned his blade. "A foolish waste of a fine swordswoman."

An emboldened Dan made his play, offering the translator stone at his neck for Valkris to touch, which established communication in English. All she can do is say no to a dark realms mission. 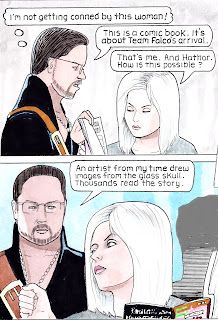 Dan showed her a comic book about her days with Team Falco, who discovered the Outworld. Things went well until the last page. She muttered something in Norse, the connection lost, and cast the book aside. Kettil and his perpetual grin took her place.

Dan watched the sorceress go. "Eight words she's ever said to me, and now I've upset her."

"Not your fault." Kettil scanned the offending page. "This shows her time in the black arts, the secret of her power. Those were not happy times."

Ed rose from a boulder. "Well, boss, do we get her for a little trek to the dark realms?"

"She isn't the only top-flight sorceress around." Dan looked pointedly at his former academy teacher Rabelus. "That's right--your granddaughter."

Posted by Nick Nuko at 8:34 AM
Email ThisBlogThis!Share to TwitterShare to FacebookShare to Pinterest