Escape From The Fairy Plane 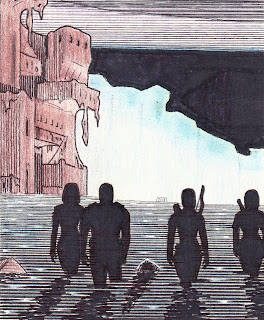 It should have been the end of a tough mission. Team Dan hired out to retrieve an artifact from floating city B70, which hovered over the vast expanse of the Cloud Sea. As it had no exit teleport, we made use of glider suits stashed there by Red Claw amazons from Eolca, for the benefit of academy students. We'd have some explaining to do.

A dizzying glide by rusty fliers dumped us into a snowbank under frigid marble skies. After hiding the suits, we faced a long climb up to an outlaw settlement here in the southern dark realms. Hopefully we'd hire dragon transport back west.

Dan shrugged off his pack in a gust of swirling ice grit. "Gimme a hand, Ed." I held one end of the map while he scanned it. "Ironically, we're on the same latitude as Lunari." That being our island paradise. "But between there and here are those mammoth-jockey nomads at Erwis."

He probed deeper into the satchel. "Bonnie--I've been lugging around this encyclopedia? This is for survival gear!"

"You never know," huffed the blonde wizardress. "I might need a specialty spell out here."

The bro Pete chuckled. "Leave it to her to get her chops busted over a book."

"Let's get going," the sorceress Zena insisted. "I can feel that hot water now."

We detoured onto a slope near the shore when the skull mages erupted in our path. Zena blasted them with comet spells, and Bonnie hurled a pair over the edge. Dan and Pete charged in for some slicing and dicing. I got two before disaster hit: a mage raised his staff and cast the dreaded Death spell.

A moaning pall of black vapor enveloped me and tried to make off with my soul. The slippery powder saved me, only now I was sliding toward the shore. Zena shouted my name and slid toward me with arm outstretched. But over I went. 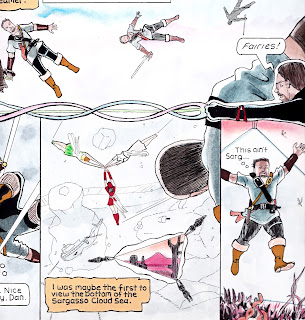 I heard Dan shout "Fairies!" as he conjured them from the ring. Three energy spears flashed past me. Nice try, Dan. E for effort. A floating squid reached tentacles for me, but I was falling too fast. A ledge resolved out of the mist, resting place of an ancient airship. The fairies linked hands and drew apart. A triangular door opened in time/space, and pink light wafted out. Were those blue trees?

I hurtled toward a meadow of burgundy grass, oriented so I'd hit it at the run. An explosion of coiled grass seeds marked my path as I plowed through the field. Quiet, serene place with fleecy clouds and a tinkling sound somewhere, borne on a perfumed breeze. So this is fairy land, I thought, blacking out.

Posted by Nick Nuko at 9:25 AM
Email ThisBlogThis!Share to TwitterShare to FacebookShare to Pinterest