Escape From The Fairy Plane (2)

A face slowly came in view above Ed. Orange hair, sad yet impish eyes, wide mouth. It couldn't be--

"Chizora!" And not the tiny waif from the ring. "Either I've shrunk or you've grown. Where's your hat?" These served as magic reservoirs on the physical plane. He sat up inside a tree house with a veined window. Vines snaked across the ceiling. A toad and a rabbit hopped about a red fiber throw rug. Ed's belt and sword lay atop a dresser, though he couldn't imagine what it held--they always wore the same outfit, unless they had copies. In Chizora's case, the gray dress was actually made of tiny blue and orange specks, which blended to gray at a distance.

"First order of business is to find out where I am. The guys must be frantic." The team's last sight of him had seen him plunging into the abyss of the Cloud Sea, whereupon Dan summoned the fairies to open a portal. Chizora was no help here, since fairy speak was so much cooing and babbling. She followed him to a quaint balcony.

Ed nearly fainted from vertigo. This was the topmost of three houses built upon each other at crazy angles, all growing form a massive stump. They had steep, red-tiled roofs over orange stone. The center one had a large wood deck sporting a clamshell fountain. At the moment, the red fairy Chiella flitted about it adding water, though Ed didn't see any kind of pail. "How's she doing that?" 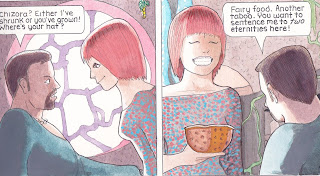 Chizora couldn't answer, of course. She patted his chest to propel him toward the bed, where he was obliged to sit. From a cupboard she produced a wood bowl shaped like a walnut.

"Right. If I'm staying here, I gotta eat." But fairy food was another way to get a one-way ticket to fairyville.

He recalled some of the ingredients: hare's milk, fairy dew, bluebell petals, frog bubbles (whatever that was). Chizora was not to be denied. She dipped fingers in, then offered him the bowl. 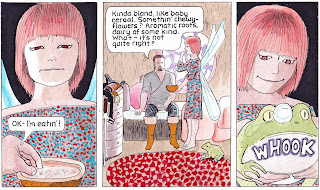 "Okay, here goes." The stuff was bland at first, like baby cereal. Then the ingredients registered in a cascade of nutty and creamy textures. There was no earthly way to describe it. Yet Chizora thought it needed work. She corralled the toad and expressed a bubble from one nostril, which she deftly added to the mix. Ed suddenly realized what the rabbit was for.

"All righty then." He got up shakily and headed back to the balcony. "I''m really not hungry, Zora. I need to get down there and find out where I am." Dan could summon them once in twenty-four hours, but he'd make no headway over this. It was up to Ed. It must have taken all three to fly him up here. He began a careful climb down to the second cottage, where Chizora flew to await. 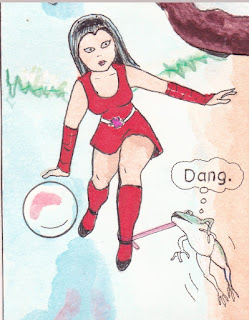 In the distance, a man in a top hat emerged from a forest and began making his way to them. Just now, the red fairy Chiella was flying in with a water ball. Fairies could do that, you know.

Chizora accepted it and offered it to Ed, who was clueless enough to hold out a hand. It collapsed instantly and dribbled through his fingers.

To accentuate the prank, Chizora brought upper wings around to bat  at his face.

"Looks like a lifetime of fun," Ed decided. At least until that man got here, and he'd get some information for planning his escape.

Posted by Nick Nuko at 10:06 AM
Email ThisBlogThis!Share to TwitterShare to FacebookShare to Pinterest