Escape From The Fairy Plane (3) 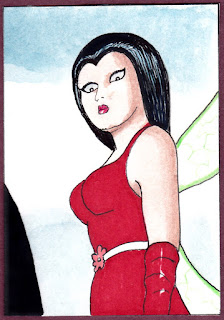 His name was Hannerty, an eighteenth century chimney sweep who got here the usual way--seeing something he shouldn't have. In his case, falling asleep in a glade proved problematic. A fairy gathering under a full moon caused him to awaken, and the fairies couldn't be having that.

We sat near a burbling brook watching dragonflies dart among the rushes.

"It's funny, Ed." Hannerty plipped a pebble into the depths. "On Earth, fairies ride dragonflies. Here, they's the same size as us."

I had told him how they opened a portal to save me from a fatal fall. But once here, always here. "You've been here over two centuries. How do you pass the time?"

"One way is nature studies. Another is making notes on yon vision in red." He indicated the red fairy Chiella, who watched from a sun-dappled hillock. "I don't get too close, though."

"Chiella? I'm sorta scared of her myself. But hold on--what kind of notes are we talking about?"

I startled him by grabbing his collar. "You can draw?"

Wheels were turning. "I'm more familiar with her peculiar talents: hypnosis and fairy music. I've seen her drop a giant with that cutesy, impossibly off-key looney tune. But she's also vain; loves to see herself in a pool or bright metal. Let's try something--I want you to sketch her in a  new dress. I'lI supply the details."

Hannerty got out his supplies and colored pencils, brought over by a man from the nineteenth century. He worked studiously for a time.

I looked it over. "Can the village ladies make this?" It was one I recalled from Wicca's collection, back when the undead horror show hostess dabbled in Doris Day and June Cleaver.

"I'm sure they can, guvnuh, but you can't be serious about taking this to her."

"Very serious, my man. I want you to show her the drawing to see how she reacts. I'm betting she'll imagine herself wearing it--in return for a little favor."

It took a lot of prodding, and I had to push him half the way there. Then we were close enough for him to work up some courage.

Chiella looked it over, loosed a string of fairy speak. I presented my case.

The other fairies--Chizora and Chianna--appeared in the distance rapidly approaching. I made my case again, and the trio linked hands, floating upward to open a triangle portal, which they planned to lower over me for safety reasons. Touching the boundaries would vaporize the affected part. I was looking down at Team Dan inside a tent. As the portal closed with a flash-bang, I crashed onto a carpet. Zena and Bonnie rushed to envelope me in a fragrant embrace.

"A guy could get used to this," I muttered beneath them.

There was a somber aspect to the tale I told them. Hannerty declined to come along, preferring to return to England, though it was vastly different from the one he knew. "Wait'll I see those sprites again," I said.

Dan stood up and banked the brazier. "You'll be a hit at the outlaw tavern, Ed. They love a good yarn, even if they don't believe it. But the fact remains--you're famous, as the only guy who ever came back from the fairy dimension. There's a free meal and drinks in this."

As we piled out onto the snowy lane between peaks in the settlement, I reiterated: "Wait'll I see those sprites again."

Posted by Nick Nuko at 12:03 PM
Email ThisBlogThis!Share to TwitterShare to FacebookShare to Pinterest