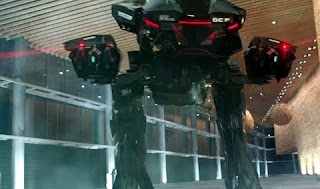 Aboard Suru, Subcommander Vaterrin watched five Cylon base ships jump into a staggered formation and immediately launch hordes of raiders. His own Batwings were on station in the gaseous nebula, undetectable by enemy sensors, where they maneuvered into ambush positions. The base ships wouldn't commit heavy nukes as yet, waiting to see how their raiders fared.

"Let's get their attention."


Multiple explosions on the Cylon right flank alerted them to an unseen problem. By  now in visual contact with the Batwings, raiders engaged in melee combat. A few blue flares indicated hits on Batwings, whose limited energy screens could handle a few cannon shells until they jumped into killing zones behind their foes. Their lasers took a terrible toll of raiders.

Suru's wing-mounted chain guns concentrated fire on small areas, wiping out whole squadrons. Those raiders not busy with Batwings got through to  launch small nukes against the ship's energy shields.

Flurries of star charges streamed from the slender branched arms of the base ships. Suru's chain guns neutralized some, and the ship nimbly dodged others. Yet too many hits were blossoming fire on the rapidly-draining shields.

Vaterrin had swung about to  line up with two foes in an overlapping angle. "Fire and jig right."

The ship shuddered upon release of a blue energy spear from the nose. Though a near miss, it continued firing to rake across both base ships, blasting chunks like a fist through balsa wood. It got worse as the plasma reaction began to consume the metal. Both targets went up in a titanic explosion.

"Survivors have jumped out of system," said Tactical. "Coordinates relayed to our Batwings."

"Recharge the pulse gun," Vaterrin ordered. "Jump when ready." That required fifteen minutes, but the Cylons were unaware their jump could be tracked. A terrible surprise awaited them.

The blonde Six commanding Base Five didn't know there was a problem until an energy lance came from nowhere to slash apart Base Three in a nightmare of explosions.

"They've tracked us!" lamented a Four. For some reason, his model affected that of an old man in a slouch hat.

The enemy's main guns began to pummel them.

"Return fire!" the Six ordered. "It's them or us until we can jump again!" At first, the foe appeared outgunned. His energy screens were failing, and flashes erupted along the port wing. "Now we have them, whoever they are!"

Suddenly Base Five rocked under tactical nukes launched by the pesky stealth fighters, just as their attacker winked out of sight.

"How can he jump so soon?" demanded the crotchety Four.

The foe reappeared above Base Four at a perpendicular angle, unleashing a volley of heavy missiles. The ship's slender trio of upper arms bent at grotesque angles under black-light eruptions. No debris ejected; the ship was collapsing into itself.

"Black hole bombs!" called the Five. All that remained of Base Four was a sparking, twisted nodule of junk.

Base Five shook again, and all went silent and dark, save for chemical emergency lights. They'd been hit with an energy damping wave.

Battery-powered monitors showed a stream of twin tailed transports swarming toward the central spindle, dodging raiders that drifted without power.

"Direct every last centurion there!" the Five barked.

Monitors showed grim scenes of the silvery robots being blasted apart by rockets from much bigger robots. These looked like canister-head frogs with massive haunches. Marines darted about, scooping up centurions who'd been lassoed by steel cables.

"No, no!" wailed the Five. "They're destroying the resurrect chambers!" That meant any Cylons killed would not be coming back. The enemy were well informed, and now they had captured a base ship.

The control room doors blew inward under a fearsome smash by a frogbot. It stomped in and waved rocket launchers around as it swept the room with purple scans. "Site secured," it said in a booming voice of such basso power as to rattle the sternum.

A bearish, dark haired man sauntered in, escorted by marines. "I hate to ruin your day, folks, but we need one of these fancy spindle ships as a gift for one Admiral Adama." His name tag read Vaterrin.

"And what do you want," the Five demanded.

"You, lady. We're going to study your crackpot philosophy, so don't disappoint, you hear? It keeps our interrogators sharp, even though we already know all your secrets, thanks to one of your own."

At his gesture, the marines took them into custody. Technicians swarmed in, lead by a Cylon Five who had defected aboard Galactica. She could effectively fly the ship until its controls were figured out.

"Who are you?" asked the Cylon Five.

"Earth Protectorate," Vaterrin replied. "If you  cheat by building robots, then we build bigger ones. If you plant agents, we turn them against you. I guess it bites to be one of you."

Posted by Nick Nuko at 8:55 AM
Email ThisBlogThis!Share to TwitterShare to FacebookShare to Pinterest