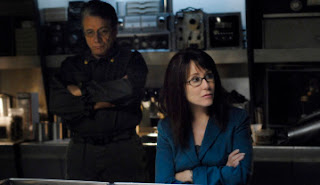 A group of seven traversed one of Galactica's outer corridors: Admiral Adama, President Laura, four marines, and an eccentric woman dressed in filmy black. Raven hair topped a diminutive frame, its curls dyed black in defiance of her sixty-odd years. Adama had summoned her from the civilian ship Aurora, acting on an observation made by the president. In the course of spying on the traitor Baltar in his cell, she noticed him gesturing and speaking to some imaginary friend. Or was it real?

A guard admitted them to the holding area, where they took position near Baltar's cell, out of his view.

Adama sighed. "I can't believe I'm doing this. But since we discovered the Cylons are tracking us, I'm not leaving any resource untried." What good was finding Earth if the Cylons did too?

The medium, Madam Sazny, turned owlish eyes on him. "If he does have a spirit familiar, it will come when he feels threatened. Ready?" She led the group in front of the glass plate, catching the prisoner by surprise. "Well, well, isn't she a pretty one. A blonde in a red dress, whispering in his ear."

"What do you see?" asked President Laura. She opened a folder on known Cylon types, so far numbering seven. The medium pointed to a blonde in black. "That's a Cylon Six. We actually have one in a different cell."

"I need to get in there," the medium insisted. Adama nodded to the guard, who began to turn the hatch wheel. "And I need something. . . .that baton!" Again Adama nodded, and a marine presented his baton. "Let's see if this one can manipulate 3D objects. Watch carefully."

Sanzy entered the cell with the baton behind her. Baltar took on a smarmy look, prepared by his unseen companion to counter with a cynical remark. But Sazny only had eyes for the very surprised blonde. "That's right, missy--I'm looking right at you. Catch!" She tossed the baton, which the unprepared woman reflexively caught. Just as quickly, she threw it down and disappeared. "Not very smart, are you, princess? Chicken puke!" With a taunting glance at the bug-eyed Baltar, she recovered the baton and went out, giving it back to the marine.

"We saw that," Laura said. "Something caught it, then dropped it. That makes her a fine assassin."

"Not really. She can't exist far from Baltar, though she feeds him information he couldn't otherwise know. I believe that's how the Cylons are tracking us. Did you know they can even have sex?"

"Wait a minute," Adama injected. "You can sense her thoughts?"

"Yes. She's mourning for the Sevens, who were put in storage--whatever that means." When Laura displayed a photo of one, she added, "Well, I guess you won't be seeing her anymore." Suddenly she went pensive. "There's a great power out there. . . .one like me, who has just become aware of us."

Adama traded looks with Laura. "Is it a threat?"

"I don't think so. Admiral, they know where we are. I suggest we meet them halfway. The route isn't far off the path you're taking to find Earth."

It was quite a leap of faith, taking advice from one who parlayed with spooks.

"We risk it. If there's any chance of finding friends out there, I'm taking it."

Posted by Nick Nuko at 6:36 AM
Email ThisBlogThis!Share to TwitterShare to FacebookShare to Pinterest