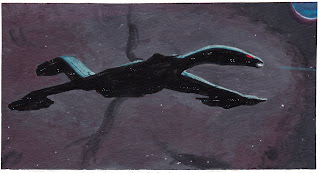 "Would you look at that." Colonel Tigh gaped with his one good eye at the overhead monitor. The warship confronting them had fighter bays like Galactica, but had made no moves as yet. Of greatest concern was the nose hatch, currently closed.

Lt. Gaeta swiveled at his console seat. "Magnetometer is off the scale. It's some kind of plasma weapon, and we don't want to be in the way if they decide to use it."

"They won't," assured the spirit medium, Madam Sazny. "I'm in contact with my counterpart over there, a woman called Shira."

Admiral Adama wasn't going to let this private tea party go on any longer. He pulled down the intership phone. "This is Admiral Adama of the Battlestar Galactica, representing the Twelve Colonies."

The reply had a curious overlay quality, with the speaker's native tongue subdued in the background. So they had a language translator device. ". . . .Commander Selten of the battleship Suru, representing the Earth Protectorate. Your ship could use some drydock time, Admiral."

That was painfully obvious, given all the scraps with the Cylons. "Is that something you can arrange, Commander? I'm not sure we have a way to pay for it."

"That's the beauty of it. The Malcosians use a barter system. Their preferred medium is literature: heroic sagas and the like. I'm sure your story would entertain them for months."

Adama couldn't suppress the grin he traded with Tigh

"Our telepath has been apprised of your situation. We need to know if these Cylons have technology similar to yours." Adama answered in the affirmative. "Then they represent no threat to us. We need all the intel you can provide, so I suggest making a visit to your ship."

"Certainly, Commander. We'll receive you in docking bay twelve. Our execs can work out the details." 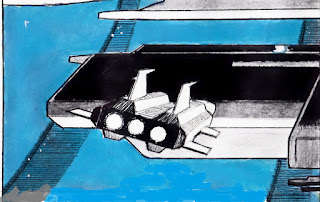 An honor guard formed up on the hangar deck, composed of Adama, President Laura, Tigh, and the full complement of orange-suited deck hands. The track system pulled an impressive shuttle out of the airlock. It was much bigger than Galactica's Raptors, but less agile--a true heavy-lift workhorse. Behind it, two batwing fighters followed on antigravs. The transport lowered a staircase.

"Render honors," Adama ordered, bringing everyone to attention. The short Colonial anthem played, finished up with its rousing drums.

A detachment of black-suited security came down to flank the stairs. Next came a dark-haired man in blue jacket over gray pants and boots. Behind him was a red-haired woman in green jacket and gray skirt. Some moments passed in diplomatic exchange.

"Our first concern," Selten said, "is that spirit familiar who's allowing you to be tracked."

"By all means." Adama gestured to Madam Sazny, who conducted the red-haired Shira with four of Galactica's marines. It pained him a little to see his Viper pilots all but crawling into the exhaust ports of the exotic fighter planes.

Selten also took notice. "Like them, Admiral? I'm prepared to donate those two, if their IAs have no objection."

"Your AI is that advanced?"

"Not in the way you're familiar with. It stands for Indwelling Animus: computers ingrown by lab-raised brain tissue. It can fly the ship when the pilot is injured. The helmet and suit links translate thought into actions." They began walking toward the ships, causing pilots to make way.

Adama walked up the wing and peered into the cockpit.

"Greetings, Admiral. I am Kiria."

A few muted chuckles broke out at Adama's discomfiture. Already his best pilots, Starbuck and Apollo, were being helped into the personalized flight suits for a test run. 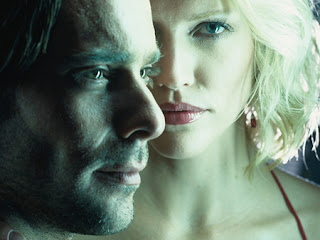 Baltar couldn't believe his bad luck. Now a second witch came to accost his Cylon familiar. And here he was on trial for his life. Well, let them try, because the Six would refuse to appear.

Bracketed by four marines were Sazny and the newcomer, a redhead whose badge read Shira.

In a shimmer of haze, the Six began to form. Her tortured shape lurched to grip the table edge. "How is this possible? You have no right. . . ."


"It's possible," Shira said, "because my race developed this talent for this very reason." She made claws of her hands and spread them apart against resistance.

The Six put hands to head in agony. Her form wavered in and out of view as she tried to escape. With a scream, she dissolved to phantom winds.

"No!" Baltar fell to his knees, for the first time completely alone.

On the hangar deck, Colonel Tigh brought unwelcome news to Adama. "The Suru has just jumped."

"Merely a precaution," Selten said. One of the deck hands seemed astonished at how a hovering fighter was pushed with  one hand toward the launch tube. "The Cylons are certain to react to the loss of their spirit contact. I've directed my XO to the coordinates we expect them to arrive at."

"Preliminaries," Selten insisted. "I intend to locate their home world and destroy it."

Posted by Nick Nuko at 8:27 AM
Email ThisBlogThis!Share to TwitterShare to FacebookShare to Pinterest