Interview with the Godfather 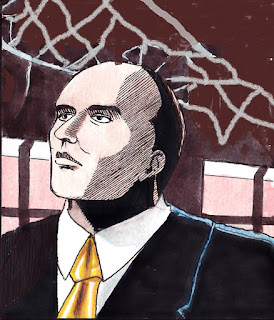 Dr Berens surveyed the odd trio who insisted on an after-hours interview at his sleep clinic. If he wanted to be facetious, he'd label them the Dracula bride, the Metropolis automaton, and the godfather. The guy even had a pinky ring.

"Mr Bigmon," Berens began, "I understand you have reservations about the safety of our hologram suites, and feel more at ease with your two. . . .companions."

"You said it, pallie, ever since that Jakers guy got bit on the  neck in the Gilligan's Island gig."

Berens' chest tightened. "May I ask how you came across that privileged information?"

"It is quite simple," said the Bride. "Wicca foresaw these events in her crystal skull."

More suspicious by the moment, this was. Berens didn't even ask about the other woman's cyborg suit. "You understand our price system from the catalog: five thousand per week."

The Bride turned toward Bigmon.  "Can a talent agent afford such frivolity?"

"Oh sure, I guess so." Bigmon hiked broad shoulders. "The feds are throwin' around plenty of monopoly money. I got my share."

"I suspect," the Bride said, "the gold one has a clanking hand in this."

The automation's features never changed. "Of course. When my minions bankrupt the system, they will declare all debt null and void. A digital currency will be put in place, which allows them to decide who eats and who starves."

"Bogus!" Bigmon tugged at his silk tie. "You've got some imagination, Queenie!"

Berens rose and opened the office door for them. "I'll explain how it works as we head for the Munsters complex." These people were likely industry spies. It wouldn't do them any good, since the quantum code that ran the facility was beyond their reach.

"Can I pick the episode?" Bigmon asked.

"It doesn't work that way. The system scans your synapses to determine your area of interest. A suitable episode is chosen, one conducive to helping your sleep problem."

Along the way, they passed the Gilligan complex.

"This reminds me," Bigmon said. "I hear that Jakers guy is in the hospital with exhaustion. He must have overdosed on Ginger and Mary Ann. Ha ha! A guy has to know his limits."

Berens made no answer, though the information was once again correct. The spies were well informed.

"Ginger and Mary Ann indeed," the Bride countered. "They are twin succubi. The same happened to Jakers when one impersonated the Gilligan character."

They had to be playing with him. Berens made a little cough. "That's an amusing theory, Miss Cambris. But the lucid state is a recognized quantity in which dreams take on stark realism.. I suspect Jakers unconsciously inflicted the wounds to his own neck."

"That," Cambris said, "is an amusing theory."

Berens admitted them to the Munsters arrival point, a large space studded with holo-emitters. "When the program starts, you'll be in the living room. Depending on the episode, it may or may not be deserted. The cast is programmed to recognize Mr Bigmon as an old friend. You ladies, I believe, will fit right in."

"Then let's rock," Bigmon said. "There must be plenty of cozy spots to sleep in a mausoleum like that. Cambris--I'm counting on you and Queenie if I get us into a dream situation."

Posted by Nick Nuko at 4:56 PM
Email ThisBlogThis!Share to TwitterShare to FacebookShare to Pinterest