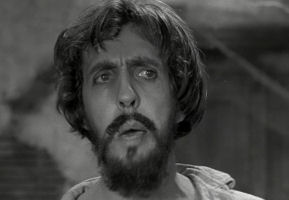 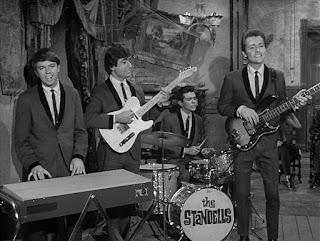 Previous  Cambris and Queenie accompany a nervous Bigmon into the Munsters sim.

A bare chamber was suddenly the Munsters living room. It rocked to the Standells performing their song "Do The Ringo", with hipsters dancing or camped out everywhere.

Cambris spoke above the din. "This is your sleep-friendly environ? What feverish musing has the machine picked from your mind?"

"I think I got it!" Bigmon sought the figure he figured responsible, a bearded man in Aristotle garb and sandals. "The poet! I must have been thinking about how you're a slick poet yourself."

Queenie's goldtone face regarded the show's principals, who were just as bewildered by the hubbub. "The Munsters. Will you engage with them?"

A girl wearing a ton of necklaces spotted them. "Hey, everybody, some new cats just blew in! What a wild bunch!" She frowned at Bigmon's button-down look. "Except for you, Mister Man. You look all Establishment, you know?"

"Cambris!" Bigmon cast about for rescue. "Where did she wander off to?"

"To the alcove," Queenie said, "enraptured by the full-length mirror."

Bigmon eased through the crowd. "So what? The Munsters didn't have any trick mirrors she won't reflect in." The way Cambris stared at the glass began to worry him. "She's so gorgeous, she even wows herself!"

"You will explain this," Cambris demanded. "The Stygian engine cannot see me. How has it created my image in the glass?"

"Analyzing." Which took Queenie a microsecond. "The flooring detects your weight, and pairs with it a corresponding image drawn from the agent man's memory."

Another bearded groover, this one in a peacoat, grinned at Queenie. "Too much! What's your gig, sister?"

Queenie scanned him with laser vision, causing his image to briefly distort. "Your stack register is sub-optimized, causing a deleterious lag in refresh rate."

"Ha ha! Hey, you know I'm into your act, and I can't even follow it! Can't wait to hear you recite!"

By now, the Munsters had spotted the sideshow. Lily came to offer an elegant hand to Bigmon. "J B! It's so good to see you again! I'm sorry about all this going on."

"It's my fault," Herman allowed, stomping over to join them. "I couldn't resist fifteen hundred for renting the place for the evening."

Grandpa scowled. "Herman, ya big dope! Aren't you gonna introduce me?" He ogled Cambris. "I am Count Dracula, my dear."

"You are Count Dracula?" Cambris let slip a view of fang tips. "That is the most spurious--"

Bigmon leaned close. "Don't queer this for us. We're here to find a quiet place to crash, maybe start a lucid dream."

"Such lovely fangs!" Lily enthused. "Who's your dentist?"

As the band finished up, one wag called out: "Quiet, everybody! The Hermit is gonna groove us!"

Twin bongo drums laid down the mood when the Hermit leveled his intense gaze at them. "In that vortex of the future--" Several stanzas later, the crowd applauded with gusto.

Bigmon knew what was coming next. Necklace Girl was going to shout Let's hear from the Jolly Green Giant! But an impish impulse led him to waylay her. "My lady friend here is quite the poet."

Both Lily and Cambris started reluctantly forth.

"No, no," the girl said. "That one!" Meaning Cambris. She looked at Queenie for possible material. "You're awfully quiet, honey. What's your hangup?"

"Hangup," Queenie repeated. "The noun form of the barnyard adjective 'hung up'. I am queen of the Bot Star Empire. As you do not exist, you cannot be bottified."

"I get it! You're into Flash Gordon!"

Cambris responded to Bigmon putting her on the spot. "Be not smug, Agent Man. I shall make them see the emptiness of their pretend lives." Bongos heralded her taking center stage.

"Know you not," she began, "how this manse illudes us?" A flourish of drum taps picked up on the sinister tone, briefly throwing her. "Licit lenity withheld by infernal machines." A raised arm denoted the outside world. "Even the theme is betrayed. In yon bone yard where glassine wayfarers mist unbidden, nor bromide bugbears hollow menace, sibilline shade lure beckons impotently within."

Wild applause greeted this, and even the Hermit made a respectful bow.

Peacoat guy whistled and cheered. "Man, that's the best indictment of capitalism I ever heard!"

In the ongoing applause, Bigmon steered Cambris toward the Munsters. "I hate to be pushy, Lily, but I was hoping you had a place for us to crash."

"Oh, certainly! Grandpa will show you to the attic. Some of our deceased relatives might be rattling around." The trio followed the old gent upstairs.

Cambris turned slitted eyes on Bigmon. "Curb your urges, Agent Man. If you dream of Lily or Marilyn, they will not be mere computer blips."

Posted by Nick Nuko at 9:48 AM
Email ThisBlogThis!Share to TwitterShare to FacebookShare to Pinterest