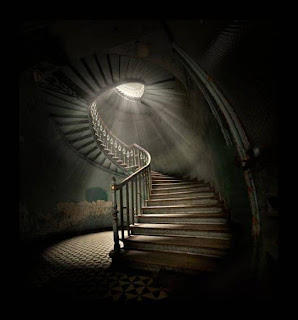 Bramwell sat against the wall facing the open door of an empty room--a room quite different from the empty one at his father's estate. The first time it had come to life, he'd been too cautious to cross over, not knowing how long the phenomenon would hold. It wouldn't do to be trapped over there. He'd seen the lady who used it as a bedroom, relieved that she couldn't see him.

As the scion of a shipping magnate, his time was his own, and he often had the mansion to himself. Let his father's crowd call him a boozer and a wastrel if they wanted to; he was the one who had mastered the I Ching. He had inscribed arcane symbols on the door frame, then hidden them from view with a new overlay. The next step involved passing a caged mouse through on a pole, just to assure no ill effects. The time had come to test his theory to the hilt.

He stepped through into cooler air, looking back at ornate wall paper. Briefly panicked, he passed a hand back through to make sure the way back was still there. Footsteps sounded outside. He quickly stepped back through just as an aristocratic lady came in. She had no reason to touch the wall where the portal was, but if she staggered into it, she'd be in for a huge surprise. The lady sat down to her sewing, heedless of being observed. Bramwell briefly entertained lewd possibilities, these being interrupted when the view winked out of existence. He stared at the open door on his side, with its view of the dusty guest room and its sheet-covered furnishings. The event had timed at eighty-nine seconds.

Moments later he was galloping toward the seaside town, where constables patrolled the wharf. Tipsy sailors were known to fall into the river when they weren't fighting. A distant church bell lent an air of peace to streets recently wet from a passing shower. Bramwell breathed in the earthy scent, wondered if folks in that other world had the same type of government, the same values.

He paid an enterprising lad to stable his horse and fetch him a pint, his calling card serving as credit. For the moment, he was content to perch on a stanchion in the shadow of a hulking cargo ship. With lofty sails reefed, its masts soared darkly into a fading sky awhirl with gulls. When the boy returned across the cobbled street, Bramwell shaded eyes from reflections on waterfront windows. He hired the lad for a final task: deliver a message to Jason Aulding.

An hour later, his tankard nursed to the dregs, Bramwell watched Aulding saunter along on a white charger. The two men were similar in many ways, but where Bramwell was dark-haired and favored black, Aulding was sandy-haired and affected light colors. Aulding dismounted and handed the reins to the same industrious lad, giving him an ostentatious tip. He knew how to needle Bramwell. He bundled up against the gathering evening chill and cocked an ear to a clanking buoy out in the channel. Just when the wash of tide grew loud in the uneasy standoff, Aulding was obliged to speak first, curiosity having bested him.

"Hollingwood, I'll hear your spiel in comfort, and pray do not waste my time."

Bramwell followed him to the tavern at the end of the lane, the King's Inn, one of the better establishments. It played host to some ship captains and well-heeled merchants. They slid into a side table and ordered their usual from the waitress: ale for Bramwell, and cognac for the presumptuous Aulding. Tobacco smoke mingled with cooking odors, reminding Bramwell he'd been too absorbed to attend his lunch.

"Which is it to be?" Aulding began, favoring the other with his cultivated stare. "It's either our mutual quest for Marilou, or your bizarre dealings in the occult. What crackpot scheme have you come up with this time?"

The violinist finished a reel, then shifted to a slower tune more conducive to intrigue.

"Marilou?" Bramwell eyed his foe over his just-arrived mug. "I've always believed it's the woman who chooses, they being much more particular then we. You may court her with my blessing."

Aulding's brow went up. "The I Ching thing? I take it you've made some sort of breakthrough to justify the ruinous outlay of funds. The townsfolk can scarce believe your father's indulgence."

Sneer away, Bramwell thought. You're better at fencing and dancing, skills that will hardly serve you in three days. "In a certain room at the estate, I have tapped into a foreign reality." In the end, Bramwell knew, Aulding must demand proof, the better to regale his friends with Bramwell's spectacular failure.

"This is known only to you?" Aulding asked suspiciously.

"It is, though my father must needs be aware of my precipitate and costly quest for knowledge." Bramwell cast about for eavesdroppers. "Commercial and  military uses are endless. My fortune is set, and I look forward to paying off my debts. Why limit myself to a small town and its quaint pool of paramours?"

Aulding took the bait. "Why be hasty? You clearly have some joint venture in mind. There remains only the proof."

Bramwell made a mock toast. "In three days the phenomenon is due again. I have arranged to have the mansion to myself. Even the maids are dismissed."

"I shall bring along two associates," Aulding stated. "You've arranged quite the opportunity for mischief." He made a mocking toast. "Either way, my trip shall not be wasted."

At the appointed time, Bramwell convinced the "associates" to remain downstairs, where they had no objection to a free hand at the liquor cabinet. On the way upstairs, he touched the pistol tucked into his waistband. He and Aulding passed portraits of forgotten ancestors in gilded frames. They passed through a far door into a corridor filled with dusty, slanted beams of evening light.

Aulding paused at the indicated door. "This changes nothing. If your experiment proves valid, I must have repayment of your debt this night."

So you shall have it, Bramwell thought. "The windfall from the venture will more than cover it." Aulding followed his awed look into the phantom room. Unfortunately, the young woman, now with piled hair, was at her sewing again. This would complicate things.

"Astounding!" Aulding, convinced she couldn't hear him, made bold to take a closer look. Bramwell shoved him across the threshold.

The lady rose, a hand at her mouth in surprise at the man who'd just come through a wall. Bramwell waited for Aulding to rise and turn around, then fired a shot. Aulding clutched his chest and dropped to his knees, prompting the lady to scream and flee the room. With a satisfied leer, Bramwell tossed the murder weapon across. The associates would come running, but would find no gun.

Impossibly, Aulding lurched to his feet. Bramwell hadn't considered the need to shoot again: a suicide victim die not shoot himself twice. He had to stop the man from coming back out!

He'd forgotten that Aulding was the stronger of the two, even mortally injured. They grappled in the foreign bedroom. Seconds remained before the portal closed again. With an immense effort, Bramwell landed on top, freed himself, began scrabbling backward toward the wall.

Intense pain at his ankles caused him to collapse, and Aulding hauled him onto his own chest, intent on having the last word. Bramwell looked back. The portal had closed on his ankles, leaving his feet on the other side. He was rapidly bleeding to death.

Footsteps pounded up the stairs, but neither man was alive to witness who it was.

Posted by Nick Nuko at 4:29 PM
Email ThisBlogThis!Share to TwitterShare to FacebookShare to Pinterest