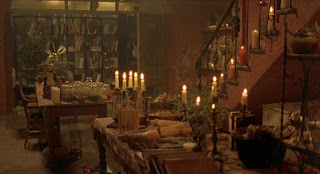 For the fourth time that day, Jeff left his desk and sidled up to the raven-haired receptionist, Janet. He got the eyeroll in passing from Margret, a middle age type who handled lab science for the temp agency. She liked to remind him he was married and had kids. That didn't dampen his absorption in Janet, and the red dress was one of his favorites. He knew her entire wardrobe by now--not all that extensive for her limited salary.

He rested a leg on the edge of her desk, intoxicated by some powdery scent she wore today. "You know, babe, you could--"

Jeff raised hands and backed away with his best boyish grin. Just getting her to notice him was a foot in the door, albeit one that only opened so far under chain and padlock. He cast a wry glance at Margret in passing. "What's it gonna take?"

"Try this." Margret leaned back from her computer. "Admit to yourself she's out of your league, and stop being a jerkheimer."

"Eh!" Back at his desk by the tenth-floor window, Jeff put up his feet and sipped coffee from a paper cup. The newspaper lay folded at the classifieds. He looked over the agency's ad copy for heavy equipment operators. His employer had high standards, and it wasn't easy finding the right stuff for the job. The want ads were a good place to see what the competition was up to. Sometimes you could get lucky under "special services" by finding a jack of all trades.

"What's this?" Jeff tucked his pencil behind an ear and read the blurb.

He jotted down the address. It was early yet, so he could look into this and still get in a sales call before lunch. He rose and rakishly slung his sport coat over a shoulder, but Janet wasn't looking. "Janet, my love, I'll be back at one if anybody calls."

"Noted, Jeff, noted." She made an entry on her super-organized ledger before picking up an incoming call. Jeff's dreams were haunted by that customized purring ring tone, Maybe this Parallax guy had some trick he could insert into the earpiece. . . .nah, he was probably just another con man. Jeff snickered at the memory of "X ray glasses" that used to come in cereal boxes.

He made the appointed stop at a construction rigging firm. It turned out most of these guys were lifers who weren't interested in moonlighting or being lured away by more money. The manager took his business card with a bored look. Admittedly, Jeff wasn't his usual boisterous self, what with the distraction of the coming call at the occult shop.

The store lay in the old part of town where parking was at a premium. He found a spot in a weed-sprouted gravel lot behind a hardware store, just about the only place that didn't have apocalyptic warnings for those who dared to park here. A three-block walk brought him to a shop front beneath three floors above.

An old-fashioned bell announced his entry. The place had that queasy feel of the forbidden arts, though bent in a more scifi direction. Posters of ancient civilizations loomed over rows of glass cases.

A man who could only be Parallax came downstairs from a circular gallery; he had the second floor as well. His suit had a pretentious modern cut with a Nehru collar. The high forehead sported a widow's peak that grayed at the temples.

"Am I that obvious?" No wonder Janet kept him at arm's length.

"What shall it be, then? Love potion? Knockout drops?"

Parallax looked right through him. "I sense you're willing to admire the lady from afar. Something akin to X ray goggles, for example."

"You have those?" Jeff caught himself, remembering the cereal box thing.

"Nothing that wouldn't be painfully obvious to the lady. There is, rather, a more discreet device. Come with me." Parallax threaded the rows of cases full of gimmicky-looking gizmos. He unlocked one and took out what resembled a box of tin foil. "This way for a demonstration." He made for the rear wall, where lesser treasures lay on shelves. "I'm going into the back room. You'll see the box activate, but don't be alarmed." He stuck the box on the wall, where it adhered, and vanished through an arched doorway.

Seconds later, the box moved a few inches, and exuded a thin white paper bag. Whirring sounds happened, and the bag filled with what seemed to be printouts.

Parallax came back, his coat draped over an arm, revealing a white shirt with Chinese collar. "Tear the bag off and look inside."

The bag contained a series of photos showing Parallax removing his coat. The implication caused Jeff a brief arrhythmia. "Unreal! You mean, all I do is put this on a dressing room wall?"

Parallax wore a hint of a grin. "You'll have to be circumspect. If someone sees the box move, they will probably take it down and discover its contents." He waited. "It's quite reasonable at fifty dollars."

"Too reasonable," Jeff said suspiciously. "Where'd you get it?"

"Let's say it's from Old Atlantis. My name, in fact, is Atlantean." He smoothed Jeff's lapel. "I'll take one of you, so you can see it's on the level."

Jeff needed no urging. Once in the dim corridor, he removed coat and tie. When he came out, the box was already filling its bag. He tore it open and gaped at views of himself removing coat and tie. Next thing he knew, he was counting out the bills. "I don't know how you stay in business, amigo."

"I aim to serve," Parallax said a little too smoothly.

Posted by Nick Nuko at 3:36 PM
Email ThisBlogThis!Share to TwitterShare to FacebookShare to Pinterest