The Wizard of Hel 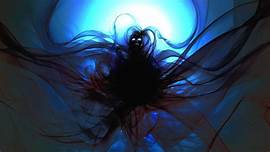 In the upper reaches of Hel

Some of the lost souls remembered friends and family. Most of those taken from isolated hamlets and caravans did not, and clung to foggy memories for that small solace. Nor was death a means of escape, as no one could die, or even age. But pain was real enough, the kind of pain that made one long for death.

Koll, a stocky farm hand who once dabbled in wizardry, had invested the last 75 years planning his escape. It all hinged on one of the three devil types. It wasn't the dominant Yellows, those fire elementals who beefed up their magic via life taps. It certainly wasn't the dreaded Grays, who misted up from a lower realm, whispering a siren song of privilege and authority. No one could verify that dubious claim, since none who took them up on it ever came back. Koll would instead be the grass sprout that cracked a mighty pavement.

No, it was a certain Blue, those wielders of icy pain, that Koll had been chipping away at. It was a good thing he had such a thick skin for abuse. Koll even knew her name. That happened during an intense encounter where he had been persistent in convincing her of the mindless futility of this place. Under a blast of punishing cold, he tried to recall the only spell he knew--one involving a life tap from plants or animals. But he was woefully under-powered for the attempt at triggering the spell. Worse yet, the astonished devil must have spread word about him.

The Yellow who ruled this twilight enclave singled out Koll for special attention. He delighted in hoisting Koll by the collar while searing him with flame. Yet Koll never cried out, hating the sight of that masklike face. Membranous ears fanned out on either side of beady eyes and a slit nose. The mouth was a weird grillwork, as if the open lips had been sewn together with ruby thread.

Cast down when the Yellow spotted fresh prey, Koll was surprised to see it was none other than the resident Blue. She was sculpting a massive lattice of ice, whimsically embedding souls in the crystal structure for embellishment. The Yellow lambasted it all into a melting ruin. Shivering souls crawled away and tried to be invisible.

It was the opening Koll had waited for. Not today, though, because the furious Blue vented her wrath on all within reach. For that matter, art itself was most un-devil like. There was the place for planting a grass seed.

Next day--though time had no meaning here--Koll watched the Blue sail over a low ridge, lamenting the loss of her project. Koll jumped when a hand grasped at him. Koll searched his face. "You're one of those she trapped in the ice."

"Never mind." The man looked up, where pockets of faint luminosity dotted the high reaches. "From the spat the devils were having, it seemed the Yellow thought we could use the sculpture to climb up there. Don't you see? That's the surface world! But then, if you got up there, could you break through?" He shuffled away, keeping a low profile.

Koll did the opposite in seeking out the Blue. "For what it's worth, your art showed a lot of imagination." The Blue whirled on him and fanned him with a carpet of frost. No one dared speak to the devils. Koll forced his cold-quakey voice to work. "Twila--" There, he'd dared speak her name. "You did it out of boredom. I won't insult your intelligence. You know I'm trying to divide and conquer. Help me with my spell, and. . . ." He sprinted away under a barrage of stinging icicles.

Another "day" passed, when the glow spots returned to the upper heights. Koll remained conspicuous, practically begging to be seen by the Yellow. It came without warning, a plasma lance that pierced his back without mortal damage. The pain dropped Koll to his knees. The Yellow hauled him up by the neck.

Suddenly a patch of blue blossomed across the Yellow's belly, a cold-magic attack from the rear. Howling with outrage, the Yellow spun around and grabbed the Blue by her neck as well, forcing both to the ground.

The word formed in Koll's mind, and Twila was staring at him.

Here is the power for your spell.

A surge of energy infused Koll, picking up strength as it coursed through the Yellow on its way to
him. The spell clarified in his mind. Of course! It was so easy. Rising, Koll gripped the Yellow by his neck, forcing him to release Twila. "Dron. Your name is Dron. Well, this is for you." Koll let the spell rush out in a torrent of life-sapping thievery, siphoning the Yellow so hard his fires went out. He shriveled to a bald, emaciated man who tried to crawl away, but others fell on him, kicking and biting.

Do not return for the others, Twila warned. Was she asserting he could leave? The Grays will come in force, bringing with them an Overlord.

So much for his rescue mission. "And you?"

It is my escape as well. Go, and  I will follow.

Koll raised arms, flush with power, and vaulted upward. He aimed at one of the glowing spots and smashed through.

Late evening snow enveloped him when he came down near the hole he'd made. This was real cold, the kind that could kill, and Koll was too weak to walk. He raised up to see orange sunlight--a glorious sight--making long strips ahead of a caravan pulled by woolly oxen. An old woman climbed down, briefly hefted a spear when a Blue shape went loping away. She helped Koll to his feet.

"By the stars, boy--where in Hel did you come from?"


Posted by Nick Nuko at 6:41 AM
Email ThisBlogThis!Share to TwitterShare to FacebookShare to Pinterest